651 MILES OF THE PCT CONQUERED

FROM GAILA:
When Dick finished the hike he took a shuttle from Big Bear Lake to Ontario, CA. to catch the 11 pm train. It was a 6.5 hour ride to Maricopa, AZ where mom and I picked him up. He was happy to be back. After a shave and a haircut he's beginning to look less of a mountain man! We will be heading back to Michigan soon.

FROM DICK:
I hiked to Cajon Pass through tunnels under railroad tracks and Interstate 15. I was heading for the Best Western. This was where I planned to regroup and pick up my second resupply box (the first one was picked up in Lake Hughes). It was supposed to be my ONLY indoor stay on this hike, but due to all the wet and cold this was my fourth (counting the RV).

When I left the next day, the weather report said it wasn’t supposed to rain but by noon it started. It rained all day and all night - a cold wind-driven rain! I felt like a drowned rat! The next morning I put on my rain gear and packed up early to get away from the hill I was camped at in case of a mudslide. The Sierra snowpack has doubled since I left on this trip and the storm that came through added more.

By this time, I started meeting more northbounders, but many were miserable and quitting between Big Bear and Wrightwood. Hiking north from Mexico they had also encountered a lot of wet and cold weather. When I met up with them they hadn't even hit the bad snow yet except for the few miles across Mt. Jacinto. Many of them were light-weight minimalists and weren't carrying gear that would help make it a little more comfortable for them. They pack so light they don't have enough layers or good shelter. I just don't get some of the "gram weenies". I go as light as I can but I will add on pounds for comfort (of course, many of you don't get why I do what I do! ha)

Finally, towards the end of the day, the sun came out and it was beautiful. I found Deep Creek Hot Springs and had a nice soak while I let my gear dry out.


Every day from the Hot Springs the weather was cold but thankfully sunny. Prior to the springs there was plenty of water because of the two-day downpour. My water bottles were frozen every morning but things were fairly dry, besides condensation.

On the trail south of Big Bear is this private zoo for Hollywood animals. I had read about it in other PCT hiker blogs.  Looks like this grizzly was being treated like a movie star. He was eating the biggest steak I’ve ever seen - or a PCT hiker.

Coming around Big Bear I could see in the distance Mt. Jacinto, the beast that tried to slay me last year.

FROM GAILA:
It's been interesting writing these three blog updates on Dick's hike, especially with him so far away. He would talk/text me about his days on the trail and then I would try to put it as much as possible in his words. Now that he has returned, he has written a more thorough blog to share. Most of it is repeat but it is definately worth taking the time to read.
Click here to read Dick's blog: http://packtoterblog.blogspot.com 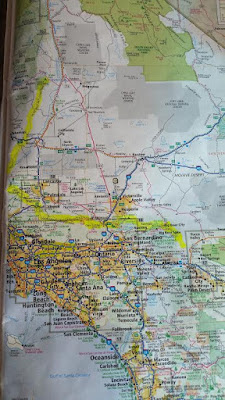 BOO is thinking he may want to be shipped home overnight via UPS rather than traveling for three weeks.

Posted by THE RAMBLING NEWS at 1:24 PM