THE COAST IS CLEAR 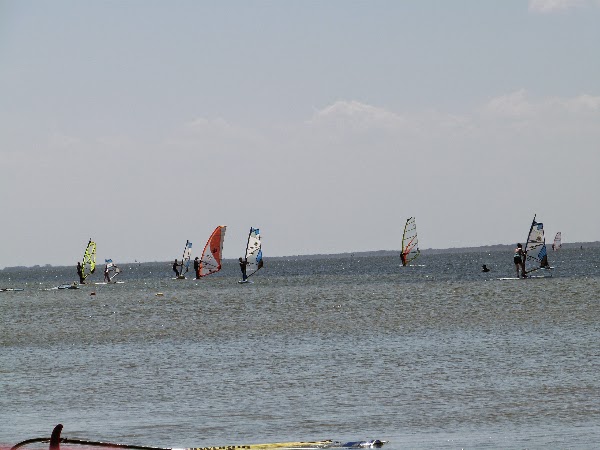 We are presently in Texas enjoying a few days at Padre Island National Park. We are parked at Bird Island Basin facing this view from our front window. This is the #2 spot in the country for windsurfing. With a Bird Island Basin Annual Pass (available for $10) you can camp for free. This is the first time all winter we haven't had to turn on the heat when we get up in the morning. So nice!

We enjoyed our three weeks near my parents and our stay at Lost Dutchman State Park. We were told by the ranger as long as we "behaved" we could stay as long as we wanted. We had great weather for hiking, plus I loved the quiet and dark nights with only the sounds of the coyotes and owls. (Mark Twain’s description of the coyote).

Many campers string solar lights around the perimeter of their RVs, but I noticed there were several campsites with mechanic work lamps under their vehicles. Out of curiosity, I asked the campground Host what was the reason for this. 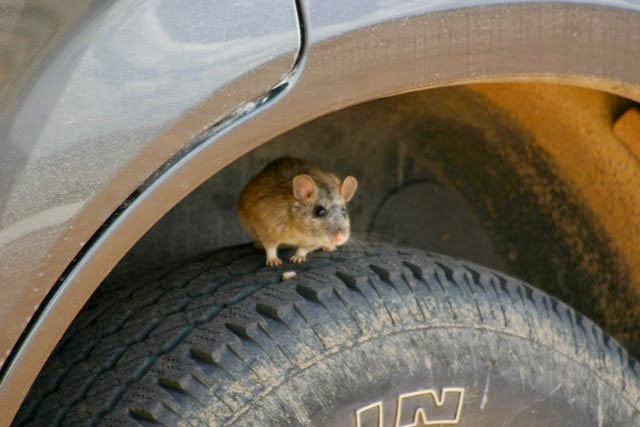 She explained it's to keep the Pack Rats from building nests in the engine. They don’t like light. So that also explains why so many had rope lights! The light also keeps the rattlesnakes away. We’d been there two weeks already and fortunately nothing had moved in. We didn't have electricity, so Dick put solar lights under the engine hoping that would deter them. 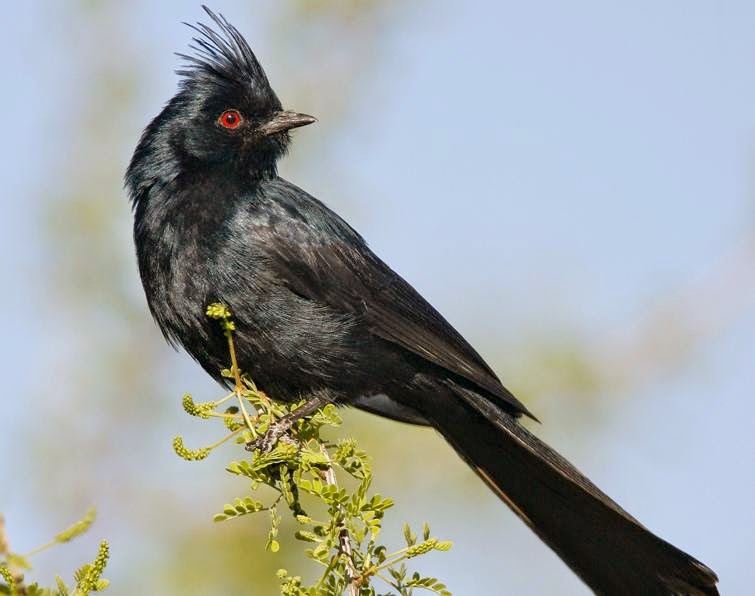 These birds were everywhere! We Googled how to pronounce
Phainopepla and practiced everyday. It is a tough one to learn!

While in the area we drove to Florence to visit Ed and Gerry Agnew, friends that I’ve kept in touch with from the park I stayed in while Dick hiked the Arizona Trail last spring. On the way we noticed the Gila River beds were dry. This once beautiful river has now been diverted.  Ed said the River Bottom Grill in Florence has a sign on their menu that reads, "located next to the mighty Gila River where the water is so clear you can see the bottom."

When we left my parents our plan was to begin traveling to Florida but the weather through New Mexico and Texas was cold with below freezing nights. We wanted to enjoy those areas so we headed south to wait it out. We camped a couple nights at Catalina State Park and contacted a couple we camped next to in Glacier National Park in Montana a couple summers ago. They invited us to their home for salmon dinner. It was fun reconnecting for an evening.

From there we went to Patagonia again. This time we stayed at the Patagonia Lake State Park. This would be a good place to connect with several friends from home. Maryanne Macy and Gregg Chance were there again this year. The highlight of our time with them was dinner and a jam session with a group at their  "A Room With a View" rental located in a beautiful area just outside of the state park. Since we like the Patagonia area, Dick was checking out real estate. He read about some acerage for sale at a great price in this area and used his Google Earth App to check it out. On the App it looked like a ridge but when we drove over to check it was a steep canyon with no building site, which explained the cheap price!

Laurie and Bill Bassett were heading for California and had always wanted to see Patagonia so this was perfect timing - except for the weather!  It rained a couple days but the Bassetts were game for checking out Nogales on the AZ side of the border. Laurie who is also known for her “Lottie’s Loot” store in Traverse City, loves to check out the thrift stores. We had so much fun exploring the only two in town. When we walked into the Goodwill Store we both just about turned around and walked out. We couldn’t believe our eyes. The two young girls at the door who were sorting intake both had face masks on and there were bins the length of the store, each piled high with unorganized stuff.  After about 20 minutes, we went to the checkout with a few items and then found out everything is sold by the pound. When we heard 89 cents a pound we just had to stay longer. We didn’t care how much we itched or what kind of disease we might get. We'd gamble for a bargain! 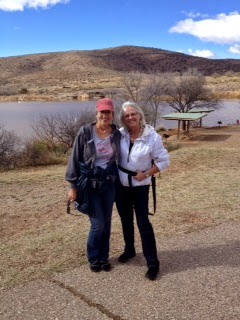 Loved being with Judy Preston again! (You also, Mike. Thanks for the nice photo)

The weather forecast through New Mexico and Texas finally looked good for us. Plus, Dick said we'd better get going before the gas prices go back up! Along our route we reconnected with several traveling friends. 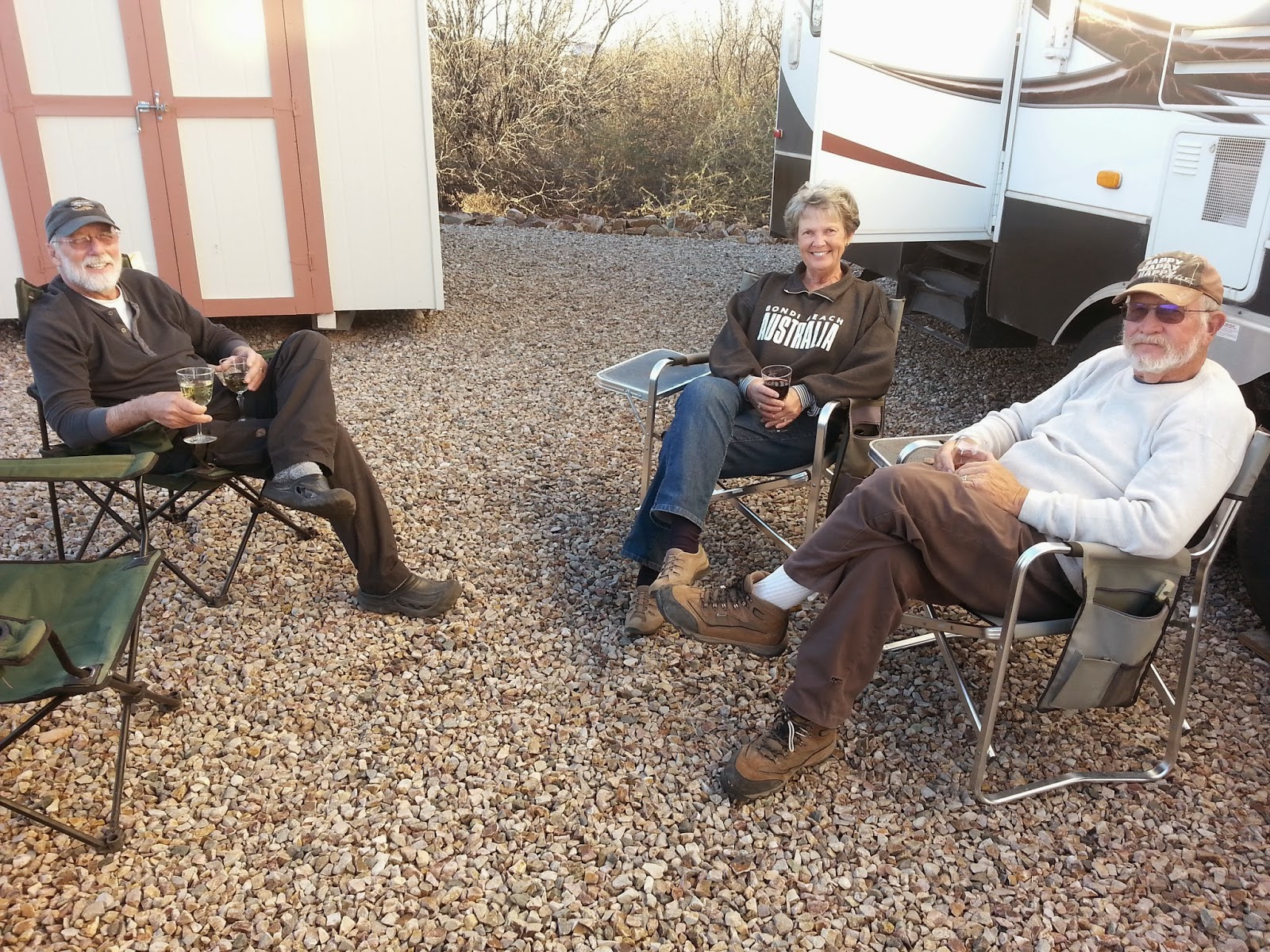 Karen and Don Richardson who were our hosts at the Junction Creek Campground by Durango, CO 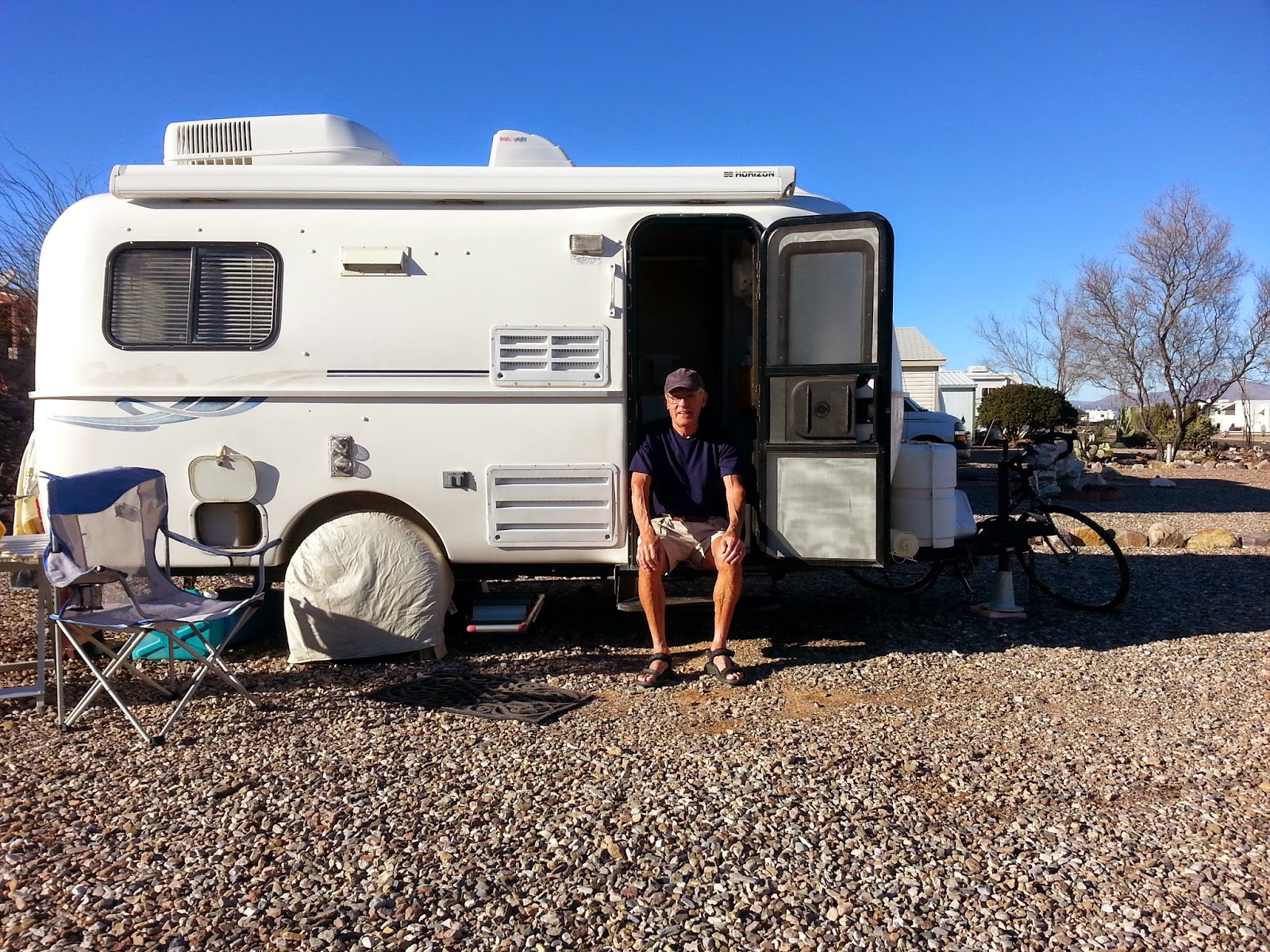 Ed Trautwein in his little home on wheels 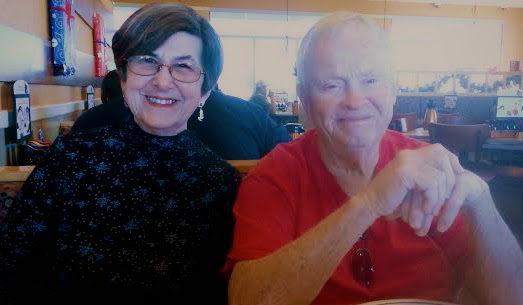 We couldn't go through New Mexico without seeing the Fergusons one more time.

We've gone through several Border Patrol checkpoints in these southwestern border states. We wonder if they have devices setup that can hear what people are saying inside their vehicle. Dick wanted to test it out once by saying, "did you hide that kilo in the toilet?" but thought he'd better not. We read on-line that drug smugglers are putting containers with powerful magnets under cars in Mexico and then recovering the containers after they've gotten past the U.S. border authorities. Most of the time going through is uneventful, they just ask us a couple of questions and wave us on, but we stopped at one on our way to Benson, AZ and the dog sniffing the vehicle ahead of us went ballistic. They say with all the electronic, Big Brother survallence equipment the government has, the most successful method they deploy is the dog. Once the dog was on to something there was no way to distract him. The handler gave the agent speaking to the driver a two finger sign and the driver was asked for his license and registration. Another agent came over, took the documents and instructed the driver to pull into an inspection area off to the side. For their sake, I hope all they were hiding was a rear bumper full of Alpo. 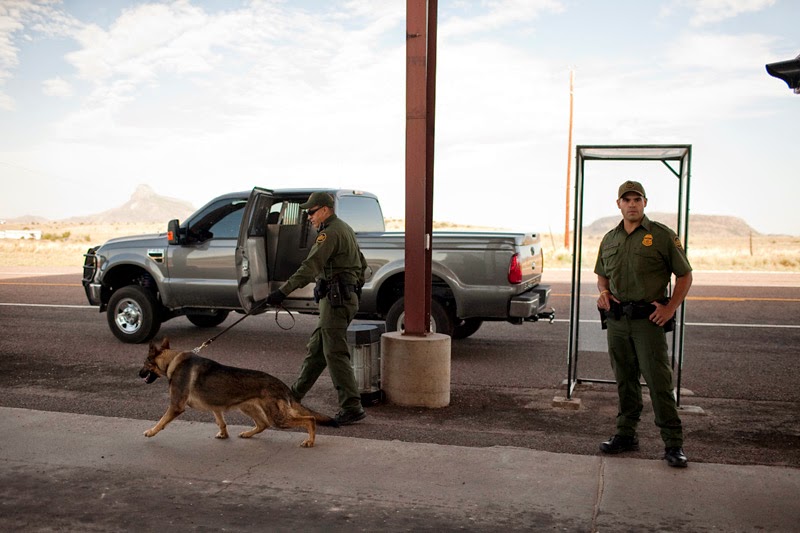 We stayed a night outside of Marfa, Texas at the Marfa Lights Viewing Area. It was a Saturday night so there were several people waiting in the dark hoping to get a chance to see these mystery lights. One lady mentioned she read this phenomena only happens a dozen times a year. So what is the chance that we are there on the right night? Dick is still a sceptic. 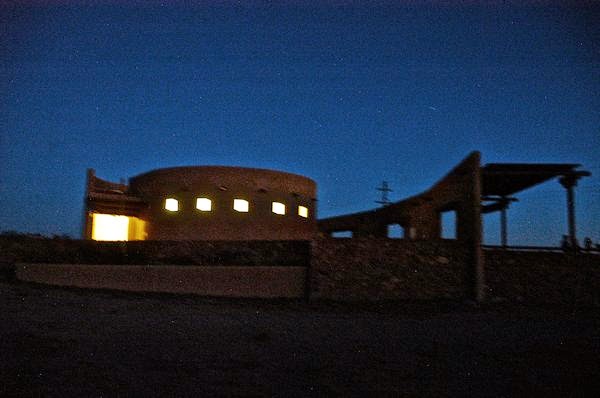 We traveled the backroad through Presidio along the border and the Rio Grande River to get to Big Bend National Park. Along this route is a movie set that was used for several westerns. One in particular we remember is THE STREETS OF LOREDO. We were in Marfa, Texas in 1994 or 95 when they were auditioning children for the school scenes. So we thought, what the heck, and took Maggie to try out. We figured we'd make it work if she got the part, but then again hoping she wouldn't because we knew we should get her back home to her real school. 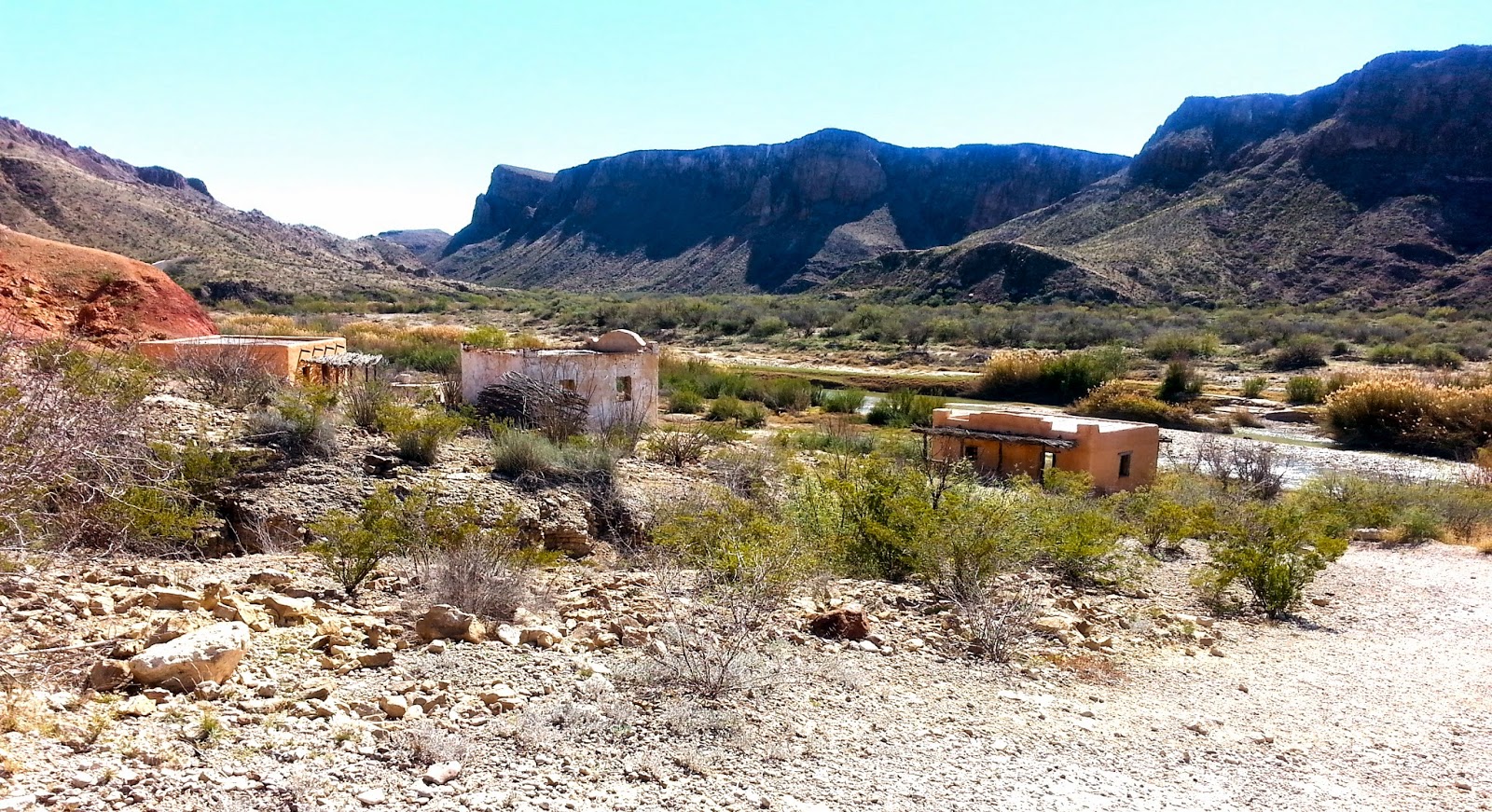 The movie set for several westerns near Presidio, Texas 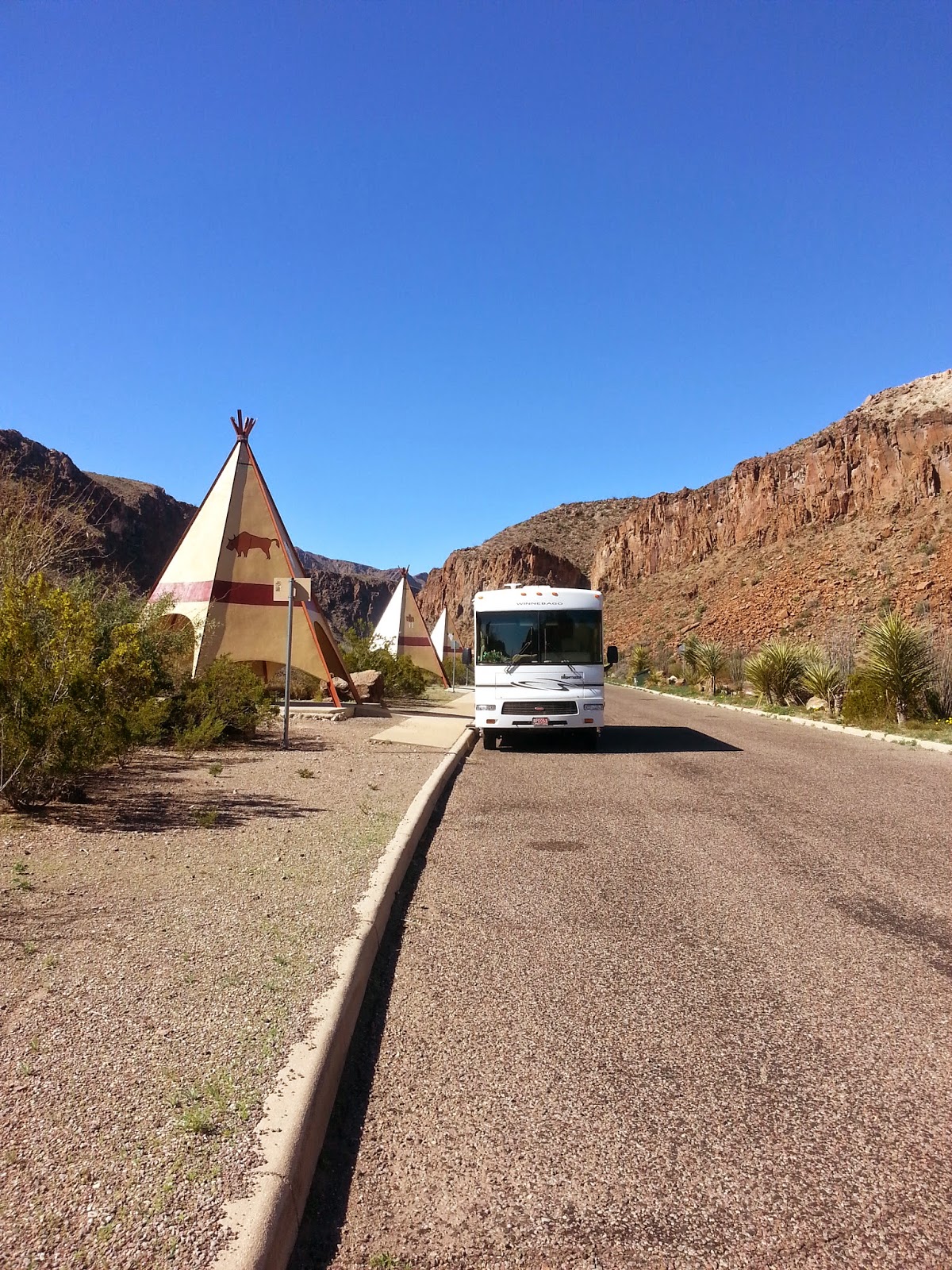 A rest area between Presidio and Lajitas


Big Bend is one of our favorite National Parks. It's an amazing place. 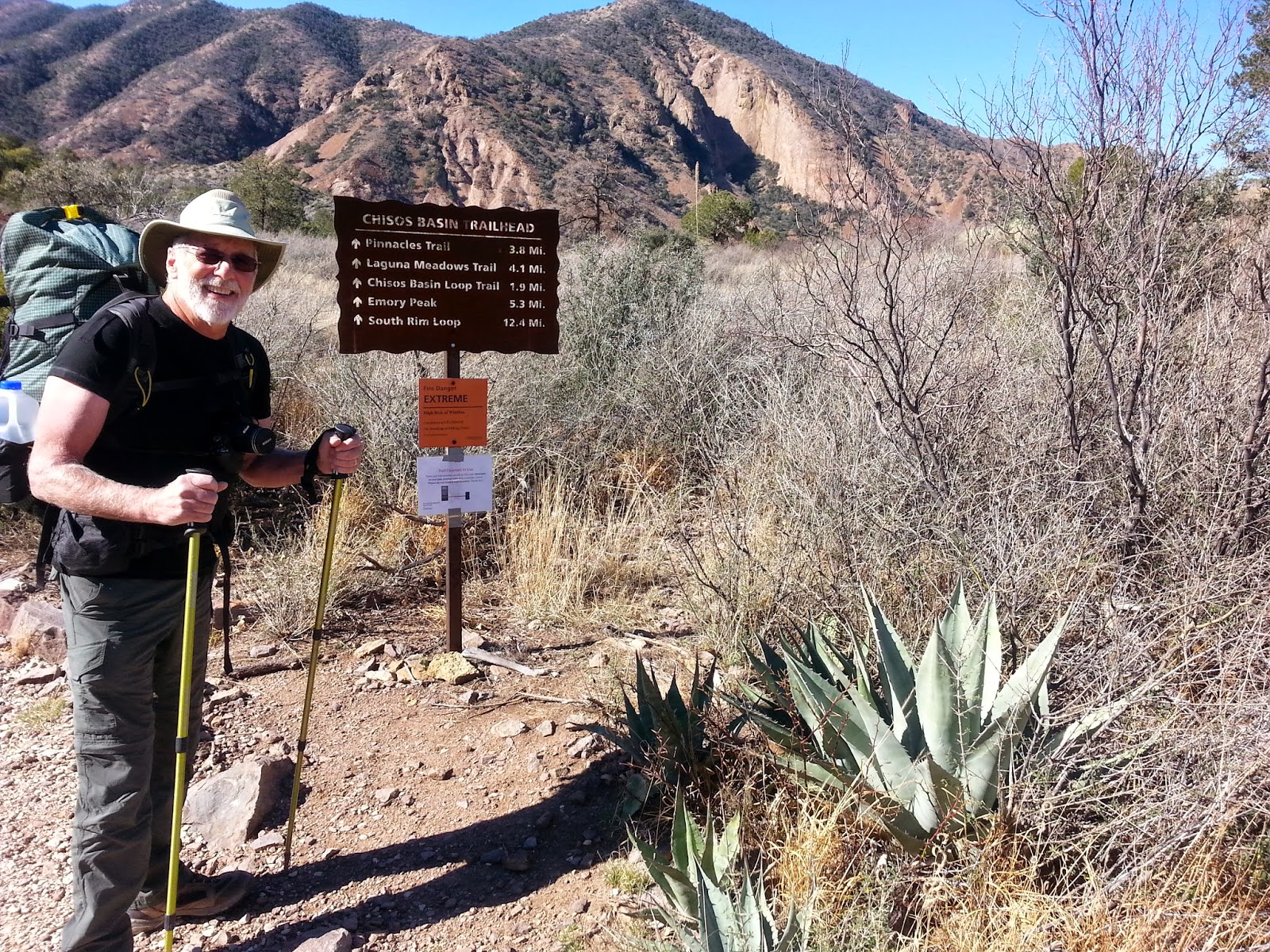 Dick did an overnight backpacking trip to the South Rim and I had some alone time. 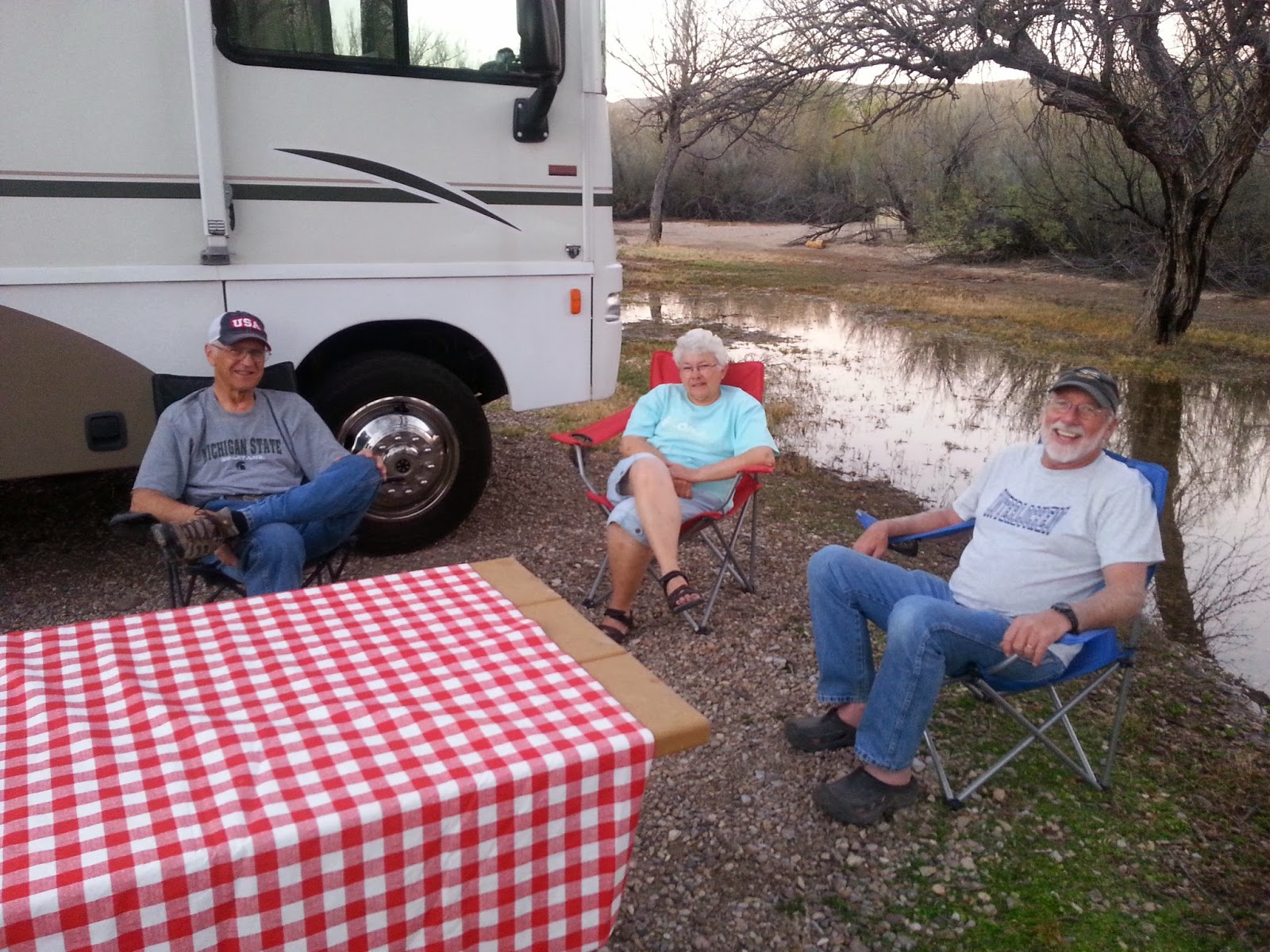 We were pleasantly surprised to find Marv and Nancy Kelso in our campground. They're from Gaylord, Michigan. We met them last year at Big Bend. We knew they were heading for Texas but that was the last we heard. It's a small world. Dick is laughing because Marv just told us he told his kids he wants his ashes spread at Walmart because then Nancy will visit him twice a week. HA 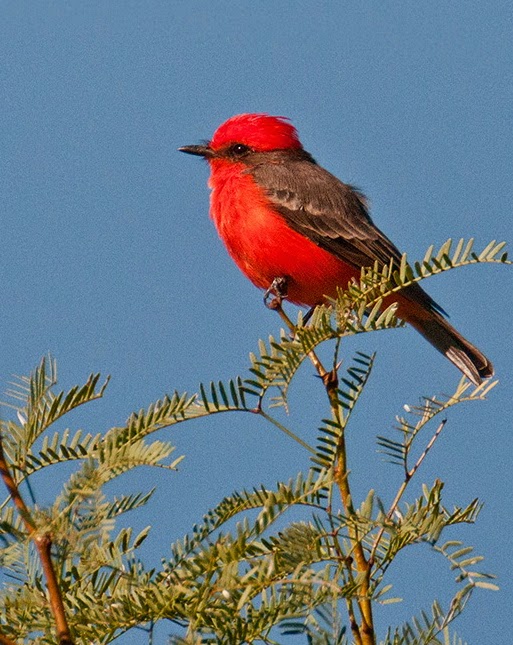 One of my favorites in the Rio Grande Village campground - the Vermillion Flycatcher. 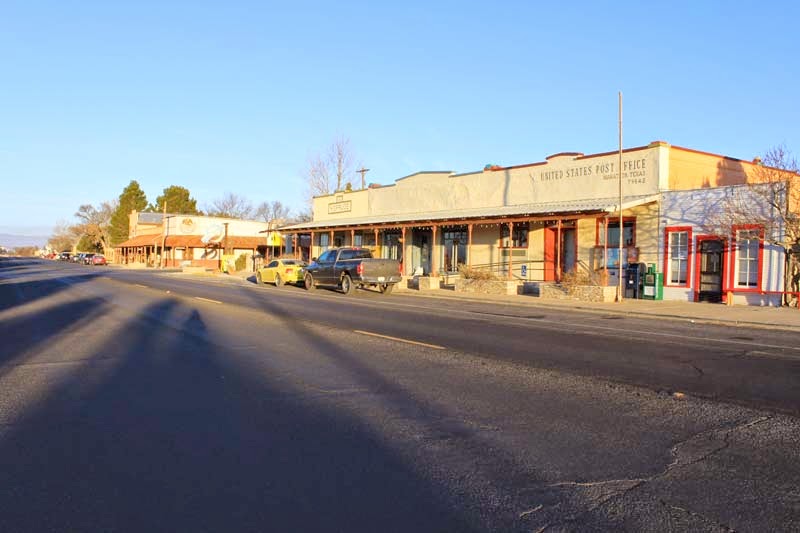 After a week in Big Bend we headed for the cute little western town of Marathon to get our
forwarded mail and then continued our trip east riding the belly of America! 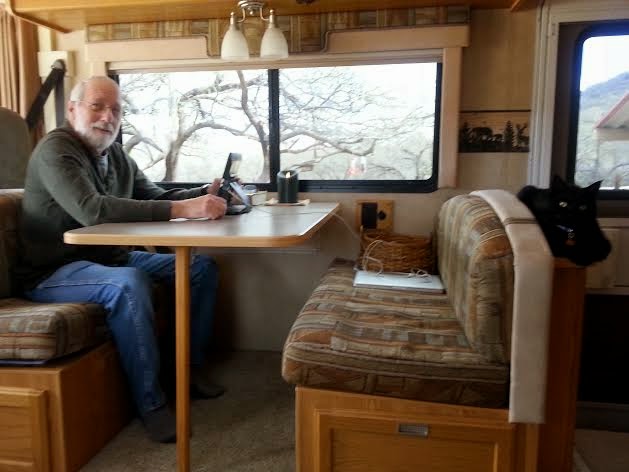 Posted by THE RAMBLING NEWS at 7:37 PM No comments: Links to this post