I'm sitting here at our favorite campground in Glacier National Park. All of Glacier is spectacular, but this place is special. We've been asked to keep it a secret but someone is spreading the word because this time it was packed with campers and unless you arrived early you wouldn't get a space. I've always loved the magnificent views here and the smell of spruce is addicting.
My brother, Joel, and his son, Cameron, drove from California to camp with us for a week on the west side of the park. Joel traveled here with us in 1978 when he was fifteen years old and loved it so much he's always wanted to return. Now he was sharing it with his son. My parents visited with them for a couple days then began their trip to Michigan. They'd been traveling with us for three weeks.

My parents continued traveling north with us all the way to Glacier National Park. From Durango, CO we visited Dinosaur National Monument.  QUARRY TOUR  After taking the tour of the quarry we all agreed it was too hot to stay at the campground so we headed to a higher elevation for a night in the very NE corner of Utah along the Flaming Gorge. This National Recreation Area is shared with the state of Wyoming. 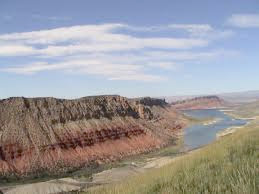 Watching the deer and antelope under the blue skies and wide open spaces of Wyoming, I couldn't help but burst out singing, "Home, Home, on the Range." 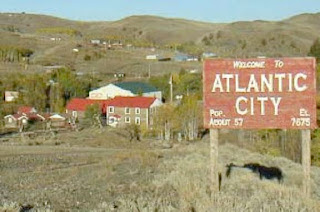 We traveled to Dubois, Wyoming to talk with the Forest Service. Dick was hoping enough years had passed that something had been done to build a trail from Union Pass to Togwotee Pass for CDT hikers. He hoped to hike this new trail.  He talked to a ranger who had been funded all last summer to route a trail through this area, but he said there is no money to build it.  So Dick would have to follow Forest Service roads. He hates road walking so he scratched those plans and we continued on to Grand Teton and Yellowstone National Parks.

So Dick again made plans to do some backpacking along the backside of the Teton Mtn. Range. I was hoping I was finally going to get my alone time. He was told by two different sources that the trail was still under snow in areas and he could lose the trail easily and he would need an ice axe in some areas. He decided against attempting it. So we traveled the park enjoying the beautiful views, animal watching and day hiking.
This has been an interesting trip from Durango, Colorado to Glacier National Park. We have experienced fires in Colorado, snow in the high country, high winds and hail in Yellowstone, crowds in the National Parks, plus there were postings everywhere warning visitors of the Norovirus that was affecting visitors in both of these parks.  Norovirus News

We are so happy to have reached Glacier National Park. We both love this place. If I hadn't had this beautiful place to look forward to we would have been on our way home by now. Dick will for sure get his hiking fix over the next few weeks and me some much needed alone time. We're both ready!!