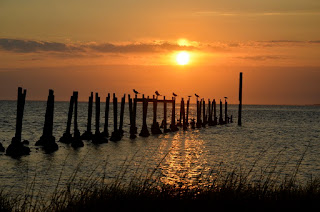 After nearly three months in Florida, we began our travels west. Traveling through Alabama and Louisiana we decided to escape I-10 and head south through St. Martinville, the birthplace of Cajun, and over to Abbeville to the Creole Nature Trail Scenic Bi-way (Hwy 82) along the coast. Traveling through Cajunland was very interesting. We passed through flooded rice fields with row after row of crawfish traps. We’ve read that in April in coastal Louisiana it rains day and night. That explains why everything was built on stilts and all the cemetaries above ground.

We wanted to try some local Cajun cooking but the restaurants along the route didn’t look too appetizing. So I looked up some recipes on line, stopped to buy the ingredients, including Zatarains BIG & Zesty Creole Seasoning (which Dick won’t touch), and cooked and pigged out on a yummy meal of shrimp fettuccine alfredo, dirty rice and shrimp gumbo. The roots of Cajun cooking come from Brittany. No one knows for sure the source of the word gumbo. Some say it comes from an African word for okra, chinggombo, while some say it is a corruption of a Choctaw word for okra, kombo, the main seasoning.

The weather forecast wasn’t good. A storm front was heading our way and would hit eastern Texas and Louisiana soon. Dick wanted to out run the storm if possible which meant we would have a couple long days of traveling to make time. Did we leave Florida too soon? We continued hugging the Gulf of Mexico through Galveston and Freeport, taking a couple of ferries across Texas bays, then headed inland to San Antonio, watching the black clouds in the rearview mirror, but then we were dealing with high winds and heading for very cold temps in New Mexico and Arizona.

Remember the woman from BC Canada we met in mid-December who is traveling around the US? We met again for a couple days at Gulf Islands National Seashore just before leaving Florida. She emailed to say she was several days ahead of us, hunkered down in Alpine, Texas, dealing with the cold, windy weather. We recommended she head south 150 miles to a campground along the Rio Grande River in Big Bend Nat’l Park where it might be somewhat better and wait until things warmed up on her route west. We really didn’t think she would do it but she did, pulling her little travel trailer south, battling the high winds all the way. Knowing she was there, and also wanting to get where it might be warmer, we went too. It hasn’t always been ideal weather but much better than what we’ve heard is happening further west - like snow in Tucson? Really?


NOTE: While passing through Mobile, AL we saw the crippled Carnival Cruise ship that was recently towed into port.

We left Kissimmee Prairie and drove north to camp a couple days at Alexander Springs State Park in the Ocala National Forest and then on to Silver Springs. When we were 27 years old we sold everything, bought an RV and worked our way around the US. We had only planned to do this for a year but it turned into almost eight years. We were just a couple of gypsies at heart. We left Michigan during a break in the famous blizzard of 1978 and headed for the southern most point in Florida. While snorkeling in the Keys we met a couple who told us about a secluded campground they had stayed in on the banks of the Ocklawaha River just on the edge of the Ocala National Forest. It was a big green area on the Florida map and it looked good to us. We drove the long dirt road down to the campground wondering what we had gotten ourselves into. It ended up being the best campground we've ever stayed in. We were instantly adopted by the family who owned the property along the river. We loved our new home and spent many days exploring both the Ocklawaha and the Silver Rivers. When we left Michigan we had $1,000 and thought we were rich but the money went fast. We tried a couple of jobs we hated and then found work at the Ocala Breeders Sales Company (OBS) a thoroughbred horse auction. The sales manager had seven kids of his own but he and his wife made us feel part of their family and included us in everything. We returned to this campground and worked at OBS for many winters after that. Sad for us, the family that had the campground had to sell their beautiful property a few years back but fortunately there is now a state park along the Silver River. So that's where we were for the past week. We canoed the river, walked and biked the trails and visited all of our friends. We are now back in the Florida Panhandle and slowly heading west to Cajun country.    Click here for a few pics Dick took along the Silver River

Established in 1908, the Ocala National Forest is located north of Orlando between the Ocklawaha and St. Johns Rivers, encompassing approximately 383,000 acres. Although it is centered on high, dry, central scrub ridges, the Ocala National Forest is rich in water resources with more than 600 lakes, rivers, and springs, including three first-magnitude springs. Each an oasis surrounded by subtropical growth. The springs are some of the finest and clearest in the United States.
Posted by THE RAMBLING NEWS at 6:12 PM 2 comments: Links to this post

We don’t like to drive over 150 miles a day and found Kissimee Prairie State Park to be the perfect distance on our route north from the Everglades. From Hwy 441, we followed the brown signs to this 54,000 acre preserve just north of Okeechobee. Then the road turned to dirt. We hate driving the motorhome on gravel or dirt roads, but we couldn’t turn back now. It ended up being around 5 miles of dirt. If we had known it beforehand we would have never planned to stay at this state park. We’re glad we didn’t know because we found it to be a very peaceful campground under one of the darkest skies in Florida. It’s a popular place for stargazers. One of the campers had his telescope set up for anyone who wanted to check out the night sky. We just happened to be there the night Nasa launched a new communications satelite and watched the red glow as it climbed and disappeared in the distance. Other highlights were the comical Crested Caracaras (picture below), listening to the coyotes howling in the night and the beautiful sunrises and sunsets. Life is an adventure and you never know where it may lead.


Posted by THE RAMBLING NEWS at 2:18 PM 4 comments: Links to this post