BROKEN DOWN IN THE BADLANDS

When we visited the Badlands National Park a couple weeks ago it reminded me of the time we were stranded there during the fall of 1990. Dick had written the experience down and published it in The Dick E. Bird News. I thought it would be fun to share the article because it is quite comical. Click on The Praying Mechanic link below.

The Praying Mechanic
Posted by packtoter at 6:11 PM No comments: Links to this post

The winds were atrocious for two days as we traveled across the Great Plains and into Minnesota on I-90. Dick had to fight the wheel as the wind hit us broadside. There were areas of construction where the westbound lanes of the expressway were closed, and narrowed down to two lanes, so whenever a westbound semi passed us it would suck us in and blow us off the side of the road. The American flags were flying stiff. The Great Plains is referred to as America's wind corridor and contribute substantially to wind power in the United States. We saw turbine powered windmills from South Dakota into Minnesota. 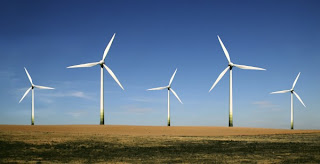 People in this area must be acclimated to the wind and other conditions. We are always amazed at stories of early settlers who were lured to these open spaces by the offer of free or inexpensive land and tried to make a living.

In Minnesota, It was interesting to see the kestrel birdhouses mounted on the back of the highway signs along I-90, as part of a program to help the declining kestrel population. We would also see large flocks of redwing blackbirds in the sunflower fields. They're fattening up for fall migration. The farmers are allowed to kill these birds if they're eating their crops. How ironic -- they're growing the crops to sell as birdseed but they are killing the birds because they're eating the seed in the fields. learner.org/jnorth/tm/rwbb/RedwingPoisoning.html

The trees were just beginning to turn and the sun was shining as we traveled across Hwy 2 along the shores of Lake Michigan. We love northern Michigan but it sure would be nice if it was a little closer to the mountains. We stopped at a rest area along the lake and parked behind a caravan of RVers with Idaho license plates. They were all taking pictures and walking the beach in awe. We take for granted how unique our great lakes are and how fortunate we are to live surrounded by them. It truly is a wonder of the world. When whenever we see the Mackinaw Bridge we know we're on the home stretch. Even our cats were acting different today. They must have smelled home in the air. 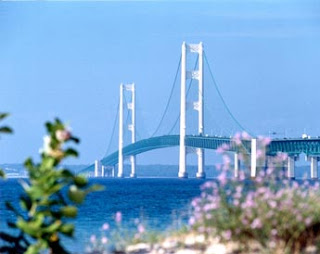 For those of you going on a color tour of northern Michigan I highly recommend taking Hwy.


119 out of Harbor Springs, through the Tunnel of Trees to Cross Village, and make sure you check out the Bliss General store. Even though the trees weren't showing their peak colors it was still a nice route home.

It's hard to believe we traveled 5,500 miles in thirty days. We have lots of good memories and many new friends. When we first start a trip it takes a few days to get into the swing of things. Being with your spouse 24/7 can be a challenge but after a while it's not so bad. Finding your way around some areas can be difficult. There are times when you get lost, or miss a turn, or turn onto a dead end or a parking lot too small to turn around. For a motorhome pulling a car that is not good. But, you learn to roll with the punches. We don't have one of the fancy motorhomes with laundry, large kitchen and all the amenities of home, so it can be like roughing it sometimes -- but you get used to it. At least we're not in a tent. We've learned to always read the check list after stopping for a while. Once you've forgotten to lock the refrigerator, and food flies everywhere, you learn fast.  It's amazing how much more we read, write and relax when there is no television. We've taken the time to write a blog and it has connected us to so many people. And that has been rewarding. Now that we have everything figured out, we would like to keep going and head to warmer climates but it's back to reality, we'll get used to it. Its good to be home.

"Man, being man and an ambulatory creature with a degree of restlessness in his blood, must be up and gone from time to time. He must go, if only to assure himself that the horizon has no boundary. What are hills for if not to have a farther side? But once one has gone, one must come back.  And that is the final satisfaction of the trip, whether it is a vacation or just a journey -- the return itself. The homecoming." -- Hal Borland

Dick’s Comments:
Once we left the Badlands National Park I felt our pilgrimage to America’s wild places was over. There are few National Parks between South Dakota and home and none that we had time to visit. It was hammer down directly east. I was looking forward to a color tour across the Upper Peninsula of Michigan but we arrived a few days too early. Jack Frost was just beginning to get his brilliant palette fired up. We finished the trip the same way we started with a pasty at our favorite roadside rest area along Little Traverse Bay, south of Petoskey, Michigan. It was a real pasty too! Anyone can make a pasty but to be a true Yooper pasty it has to come from someone with an attitude. When Gaila bought these two it was from an Escanaba woman with veins of lard and ice water for blood. Every time Gaila would ask a question she would answer, but she had that look on her face that screamed out contempt. I knew she was thinking, “Ask me one more question and I’ll break your legs, eh.” 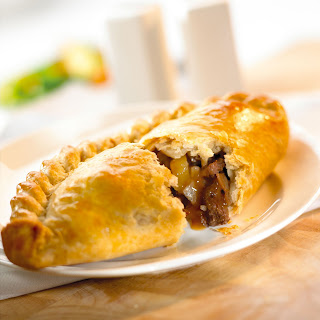 Posted by packtoter at 6:19 PM No comments: Links to this post