Heading west from Marathon, Texas, we stocked up in Alpine and experienced more winds and cold weather camping in Ft Davis and the Guatalupe Mtns. We've been told these are abnormally low temps for this time of year and we hear it's the same all across the southern US. We were so pleased when we had a couple sunny days at Balmorhea State Park. There is a beautiful spring fed swimming pool at Balmorhea,with water temperatures of around 72-76 degrees; still too cool for us to get into the water, but we enjoyed all the aquatic wildlife.

Just before reaching New Mexico we stayed at Hueco Tanks State Park. We were in for a treat. There was a line of cars waiting to get into the park with license plates from all over the country. Then we started seeing large rectangular pads with legs walking towards the trails. I stopped a couple of guys and asked what the pads were for. They explained that these are crash pads for "bouldering" and this is one of the world's premiere bouldering areas. We had never heard of it. It is very interesting to see. The rock formations here are so unusual, and besides Dick's escapade with the campground host, it was very peaceful.
Bouldering at Hueco Tanks State Park
We've been having problems with our refrigerator so decided to stop at Camping World in El Paso to talk to the service department. We ended up talking with a salesman whose father had owned the airstream dealership in El Paso during the 60's and, like Dick, his family traveled with an Airstream when he was a kid and attended several of the same Airstream rallies - Hershey, PA, Seattle etc... The reminiscing went on for over an hour. It was late so we decided to stay overnight in the Texas Welcome Center across the street. My parents had been there and said it had 24 hour security guard and cameras. We never stay in rest areas because of all the truck traffic and noise, but the RVers even had their own area to park. All went well. The next day we headed over into New Mexico and stopped at their Welcome Center to get some info. It was really nice and we said we should have stayed there. A few days later we read about a January 4 murder at the Anthony, New Mexico Welcome Center. Well, that did it for me. I will never stay at a rest area or Welcome Center again - even if it says Security! It's not worth it and I would never rest anyway.

Dick and I were both reading a historical novel about Pancho Villa. So we headed for Pancho Villa State Park, in the town of Columbus on the border of Mexico. Reading this book beforehand made our visit to the museum more interesting. In 1916, the Mexican Revolutionaries under the leadership of Pancho Villa raided the small town of Columbus. Every year, as an expression of goodwill and friendship between the US and Mexico, up to 100 riders on horseback from Mexico cross the border and are joined by American riders and parade through the streets of Columbus and into the park.

We had heard two stories, good and bad, about crossing the border into Palomas, Mexico. I asked the park ranger and a friend from Michigan who used to be a campground host here and they both said it was no problem. They both highly recommended going to The Pink Store for lunch which is within a block after you cross the border. We enjoyed the food, the people and the atmosphere.
Polomas and The Pink Store
It's amazing the difference a few short steps mean economically, socially and politically. A line in the sand marks the stark contrast between two varied types of governments and the way people live. As we crossed the border back into the US, the song by John Lennon came to mind. No war, hate nor poverty, only peace. Everywhere you look along the border you will see Border Patrol vehicles. We've had to go through several checkpoints, answer questions and be sniffed by dogs.
We planned to only stay a night or two at Pancho Villa State Park but ended up staying eight days. Out our picture window we watched the Gamble's quail running through the cactus landscape with a view of the Tres Hermanas and Cedar Mountains in the distance. The sunrises and sunsets were beautiful. The main street of Columbus is within walking distance of the park where there is a post office, library and a couple cafes. Besides places to beautiful places to hike, and peace and quiet, these are the only requirements I need to enjoy an area. A movie theatre would be nice but we did get a library card for free and borrowed movies on DVD. The library even let us keep a book Dick is reading and said to just return it when we're back in the area. So it's on to Portal, Arizona and another adventure.

It isn’t hard to do
Nothing to kill or die for
And no religion too
Imagine all the people
Living life in peace...
Imagine no possessions
I wonder if you can
No need for greed or hunger
A brotherhood of man
Imagine all the people
Sharing all the world...
You may say I’m a dreamer
But I’m not the only one
I hope someday you’ll join us
And the world will live as one  -- John Lennon

Posted by packtoter at 5:43 PM 4 comments: Links to this post

“The stars lean so close that if one stood tiptoe on the highest hill he might grasp at least one star in his tingling fingers. ......We should be able to glimpse eternity through those spark holes in the blanket of the long night. Perhaps we do. Where else is such order, such an eternal pattern, as in those stars that light the winter sky?” - Hal Borland

After stopping at a car wash to remove all the Padre Island salt and sand from our motor home, we traveled west stopping in Laredo to stock up on groceries and do laundry. We were definitely the minority. It seemed like the only English speaking people were the staff at the campgrounds. Our Spanish is limited but hola an gracias seemed to be enough. The last two weeks of December is an ongoing festivity along the border -- lots of parties in the campground with family and friends. Dick said there were many broken pinatas in the dumpsters and every evening we watched fireworks. To celebrate our thirty-fifth wedding anniversary on December 28, we satisfied our Mexican food craving at Palenque Grill in Laredo. We both agree the best gift to each other is this five month trip.

I love the cactus covered, wide open spaces of Texas. We now and then drive by an entrance to a ranch and pass through several, what appear to be, ghost towns. After Del Rio we crossed the beautiful Pecos River and, of course, had to stop in Langtry to visit the museum in honor of Judge Roy Bean “law west of the Pecos.” http://www.historictexas.net/valverde/people/judgeroybean.html 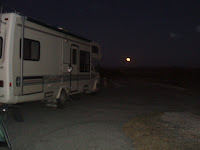 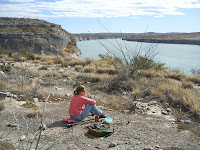 We then moseyed on to Seminole Canyon State Park where we hiked 7 miles and had lunch overlooking the Rio Grande River. We watched a beautiful full moon (the blue moon) light up the clear sky, and settled in for a night of fierce winds. We have had many nights of Texas winds. There are times we feel like we’re in a boat during a storm, but it eventually rocks us to sleep. We’ve had freezing temps several nights, but the sun warms everything up into the 60‘s or 70‘s during the day. Locals are saying they haven’t seen it this cold in over 20 years.


We traveled south out of Marathon (pronounced Marathin out here) heading for Big Bend National Park. We liked Marathon so much we visited again on our way out of the park. On a whim we took a side trip down to the Stillwell Ranch. We'd heard about the legendary Hallie Stillwell, a pioneer woman who married a cowboy who owned the 4L Ranch (4 L's in Stillwell in case you didn't figure it out). In 1997, she died at age 99. There is a campground and an old general store. The campground isn't much but it was not a wasted trip because we enjoyed meeting the granddaughter who now runs the place. She handed us a key to Hallie's Hall of Fame museum and told us to shut off the lights and lock it up when we were done. The museum and the hour long documentary honors this interesting woman. http://stillwellstore.com/hall-of-fame/ 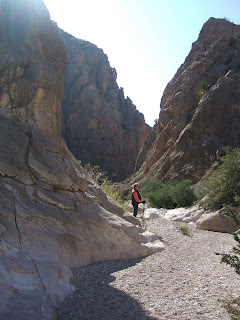 The park personnel asked us to keep Big Bend National Park a secret. It is very remote and the least visited National Park. It's difficult for me to keep a place as unique as this a secret, but I understand their reasoning. It is called Big Bend country because it is located at the Bend of the Rio Grande River which divides the US from Mexico. The park shares 118 miles with Mexico. The bird watching is great. The roadrunners were everywhere, and a site to see was the Vermillion (fire red orange) Flycatcher sitting in the morning sun just outside our window. Again, the coyotes were lurking around and hoping for a cat dinner. The only other wildlife we saw were the javelinas and deer. Big Bend’s night skies are so clear and with no light pollution the milky way and stars are intense. It was paradise sitting in the hot springs along the rushing Rio Grande River. The white throated swifts were thick as mosquitoes swooping over our heads and over the river and canyon walls. Best of all were all the beautiful hikes and places we explored. 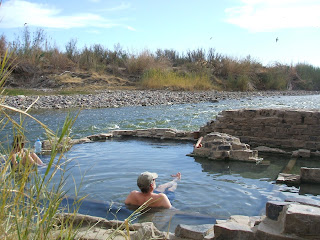 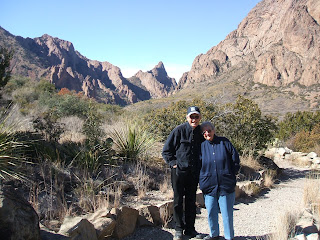 My parents decided to try out their new camper and traveled from Arizona to camp with us at Big Bend for a couple of days. We had fun visiting and playing cards. Mom resupplied us with food before they left knowing we wouldn’t be near a grocery store for a while. The nearest town was over 100 miles away. We are hoping to camp together again in southern Arizona. 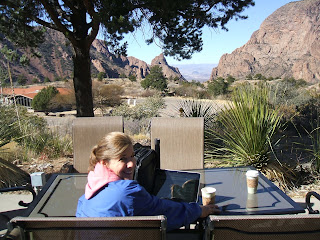 After nearly two weeks, we finally pried ourselves away from the park knowing there are more wonderful places to explore ahead.
Click here to read Dick's Blog

Posted by packtoter at 6:48 PM 3 comments: Links to this post