“My only regret about dying is not being able to see this beautiful country anymore, unless the Indians are right and my spirit will walk here after I am gone.” - Georgia O’Keefe

It’s been 3 weeks since our last update. I try to make my blog as interesting as I can so you won’t get bored and will continue reading. We are still in New Mexico and only a few days away from meeting Maggie at the Albuquerque airport. She’s flying in from Seattle and will be traveling with us for 6 days in the Santa Fe and Taos area. Places she and I fell in love with when we were here in 1999 while Dick was hiking the Continental Divide Trail (CDT).
New Mexico is diverse and has so many interesting places to explore. It is called the “Land of Enchantment.” We love staying in the natural areas. These areas are clean, protected and well taken care of. Then there is another side to New Mexico. It has a very high poverty rate. So often we would drive through areas that looked like we were in a third world country. Then among the run down, what looked to be, unlivable homes, there would be a few beautiful well-kept homes mixed in. I also noticed in the bigger cities there are always people holding signs asking for money. It's very sad and depressing to see. Traveling in different parts of the country I see that it is not all utopia and I am reminded how fortunate we are. 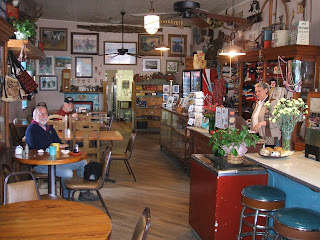 We left City of Rocks State Park and drove up to Silver City.  As we left the city we could see the Kneeling Nun rock formation in the distance. We drove the steep grades of Hwy 152, passing through the tiny town of Kingston “Home of the Spit and Whittle Club” and down into Hillsboro where we had to stop and eat at the Hillsboro General Store & Cafe. It was tradition. We’d been there a couple times before over the years and the owners, Ben and Doreen Lewis, know us as the “Dick E. Bird people.” When we drove through here in 1999 there was a police car facing the road that worked well in slowing cars down as they passed through town. I remember walking up to the car to ask the cop if I could park the motor home in the open field in town. I walked up to the window and then realized it was just a dummy. I wonder how many people got a laugh out of that one. This year the police car wasn’t there. The dummy must have been laid off due to budget cuts. We did a walking tour of Hillsboro. It has an interesting history and has turned into a cute little art community. As we headed east out of town we passed the Ladder Ranch, one of Ted Turner’s many land holds. Here is one of the largest herds of buffalo with no cattle strain. Ted is also a protector of rattlesnakes. I like this guy. It’s amazing what a bad rap the poor rattlesnakes get. They don’t want to hurt you. Just give them the right of way and they'll turn tail and run. 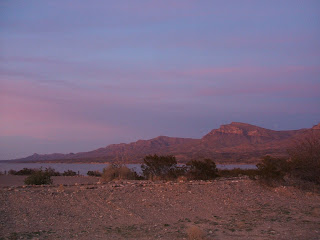 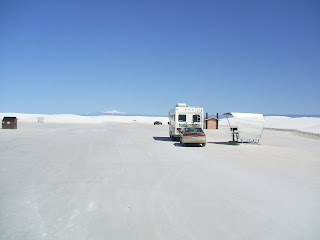 We headed for Caballo Lake State Park for a couple days and the highlight was Sandhill cranes flying over the lake, migrating for a layover in Bosque del Apache NWR.  We were also planning to migrate north to the wildlife refuge, but since the weather was still a little cool, at the last minute we decided to head southeast of Alamogordo to Oliver Lee State Park. Parents of our good friend back home, Julie Mousseau, were campground hosts there and they kept emailing us to come over, and enticing us with “there’s great hiking here.”  We traveled through Hatch, the Chile capital of the world. It’s amazing to see how this dry desert can grow pecans, pistachios, chiles, onions and grapes for wine. We also stopped to have a picnic and hike in White Sands National Park, one of the world’s natural wonders. We wished  there was a campground in the park but over the next few weeks we understood why. We often saw in the distance the white sand blowing fiercly in the high southwest winds. 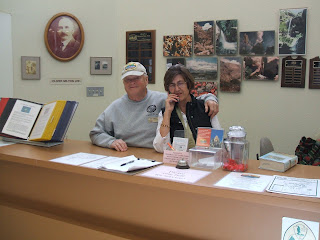 We met Julie’s parents, Marlene and Dave Ferguson, when we pulled in to find a camping spot at Oliver Lee. We planned to stay a couple of days, but ended up staying twelve. Julie told us her parents would give us the tour and they did. There was never a dull moment. Besides hiking all over the park, they took us on a couple of road trips to mountain country and showed us around Alamogordo. We had Marlene and Dave withdrawals after we left.
Over St. Patrick’s Day, we were at Valley of Fires BLM Campground. Hiking past a campsite that evening we heard a woman’s voice call out, “Happy St. Patrick’s Day.” We were greeted by a smiling woman who was Apache. No mistake about it. She said she just knew she had to have some Irish blood in her from one of her wild grandfathers. She even gave us a Blarney Stone - a polished pebble she picked up along the road. After many laughs, she explained she was with the New Mexico Archeologists and they were doing a dig of an ancient village that was discovered along the road near the park. She made our day.
Bosque del Apache NWR is a great bird migration area and we saw mule deer, coyotes, a skunk, and a variety of birds including a great horned owl, as we hiked and drove around the 12 mile auto loop. We then headed for El Morro and El Malpais National Monuments, camping in Datil and Pietown along the way. A slice of pie was $4.95 or you could buy a whole pie for just $25.00. A tourist trap for sure.
We decided to get full hookups today because of the cold weather. There were snow flurries last night and this morning. We are camped at the Sky City Casino RV Park. There were signs with arrows pointing the way to the campground. Dick commented how things have changed! The Indians used to shoot at us with arrows and now they’re inviting us to a safe place to camp with them for the night.
We've had some very cold New Mexico nights, and our furnace was giving us trouble and finally quit working. I was not a happy camper. We would get a camping site with electricity so we could use our electric heater and most days we had the sun to help warm things up. Dick was determined to fix the  *!%!^$* furnace himself. He finally did without blowing us up and I don't have to look at his butt crack any longer!
Here is his story: Dick's Blog Update