My week at Borrego Springs was not fun. I would go into town for a couple of hours each day but dealing with the traffic and crowds was not enjoyable. There were people from all over the world there to see the Superbloom!! Bad timing.

I was OK with camping outside of town on the BLM except for dealing with the heat. I did enjoy my cool and quiet mornings and evenings. After 6 days, I was so happy to move north to a higher elevation out of the hot 90+degree weather. 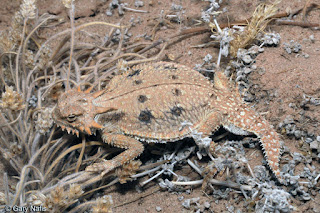 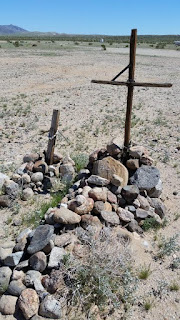 These graves were near where I was camped in the desert. When I showed it to Dick he said it was probably the last people (or pets) who died out here in the heat. 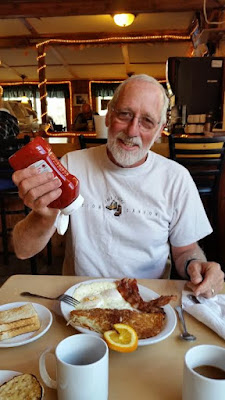 Since BOO and I are Dick’s “Support Team” we plan to meet up every now and then. On day Seven of his hike I picked him up in the morning where the trail meets Hwy 73 east of Anza. The first thing he said was “let’s go get breakfast”. I brought him clean clothes and something to wash up with so that I (and those around us) could enjoy breakfast. I’ve learned from past experience he can smell real bad after several days on the trail.

Dick has been doing 25 mile days. That is his goal. This first 150+ miles includes a one mile off-trail hike into Warner Springs to get a hamburger, fries and shake and another couple of miles of backtracking to get water. He was told about the Community Center in Warner Springs right next to the trail that serves food to hikers but it wasn’t serving til April. The restaurant he hiked a mile to was at a fancy Golf Club with a sign that reads “HIKERS EAT OUTSIDE.”  (I love the sign in a restaurant window along the Appalacian Trail “SORRY WE’RE OPEN”).

He's had to deal with the 90+ degree days and sometimes moves like a slug. I moved like a slug just staying at the campground. I can’t imagine. When he came to water (he calls this a “hallelujah moment”) he would take off his hat and use it to scoop up water and poor it over his head. His MO is to leave at dark thirty and hike when it’s cooler. Problem is he has seen a total of 4 rattlers and actually one of them he stepped on. Luckily it just rattled and side-winded off into the bushes. He said, “Michael Jordan would be proud of me.”

Dick’s trail name is DICKEBIRD. Several times he has met up with HARRISON and CRUISE CONTROL, two young guys training to hike the Continental Divide Trail, and doing the lightweight, zero comfort hike, carrying backpacks the size of a purse and only weighing about 7 or 8 lbs. They only carry snacks and hitch into towns for meals. Dick doesn’t like to road walk or hitch and plans to stick to the trail as much as he can - except when I pick him up.
He saw lots of hikers. Many of the younger ones hike with ipods in their ears. Hikers have scrawled BEER in the trail. He met a guy along the trail who wants to hike the whole trail but needs to lose a lot of weight and his workout is walking 6 miles a day. In the meantime, he’s a “trail angel” with a kiddy pool full of beer, pop and apples.
Early yesterday I dropped him back at the trailhead to continue north. He’d been dreaming of SNOW all through the desert. He is heading for Fuller Ridge where he will find plenty of it. He took crampons on this part. He will begin with 30 climbing miles from 5,000 elevation to 10,500 to reach the peak. Apparently no connection because up until now he would text or call me a couple of times a day but I haven’t heard from him yet. We had our doubts on that, because of the area, so I’m not worried. We have an agreement to not worry if we don't hear from each other for a few days. We'll see if I can stick with that.

I had to take a crash course on a few things I've never done on this motorhome before - dumping and filling, leveling and backing into a space. I am in a beautiful Escapee RV Resort east of Temeculah where I can stay up to 28 days if needed, but I will have to move around a few times as spaces open up and do all the things Dick usually does. It's a great place. I talked to more people the first day I was here than I talked to the whole week at Borrego Springs. I haven't ejoyed the mud facials yet but the whirlpool is nice. 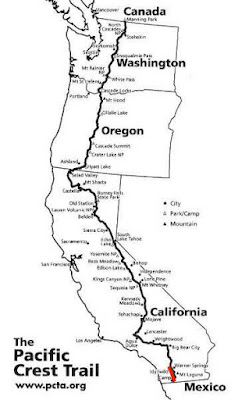 "A great thirst is a joy when quinched in time." - Edward Abbey

"(from majestic saguaros to innocent weeds) and even the land itself (from river-bottom quick sand to valley fever lurking in the dust) is at any moment ready to strike, sting, bite, scratch, poke, infect or crumble away beneath your feet without warning." - Edward Abbey 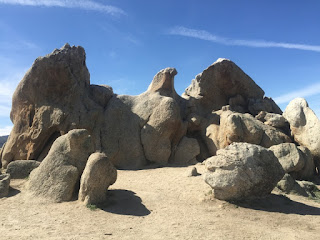 Eagle Rock - a beautiful formation he hiked by along the trail. 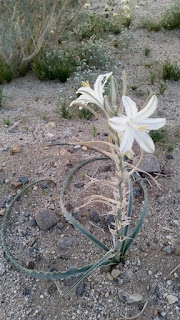 One of my favorite flowers of the Superbloom - the desert lily.
Posted by THE RAMBLING NEWS at 8:15 AM 6 comments: Links to this post

THE HAPPY HIKER HAS HIT THE TRAIL! 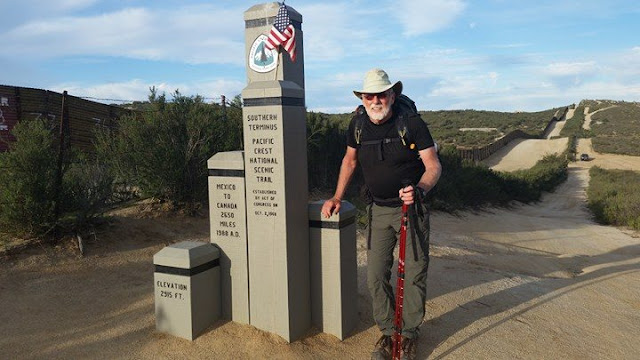 Last night Dick was like a kid waiting for Christmas. This morning we drove nearly 2 hours (75 miles) south to the WALL by Campo, CA where the PCT begins. On our way when he saw a mileage sign for Oceanside, he commented it was about this time in 1969, in this same terrain and heat, he was carrying a M50 machine gun base at Camp Pendleton in Marine Corp boot camp. So carrying a backpack is much more enjoyable. It's all a frame of mind.

This is an odd year for the PCT with so much more snow and this heatwave (mid-90's where I'm camped), but still according to the PCTA Calendar, approx. 50 people a day will be starting to hike this trail over the next couple of months. We saw evidence of this today when we arrived at the trailhead and several cars were pulling up to drop hikers off and hikers getting their pictures taken at the trailhead marker. Dick is hoping to get ahead of the herd. He is not into the social scene and prefers to hike alone. Overall there will be around 2,000 hikers this year. **

Some of Dick’s long trails have been Continental Divide Trail (CDT) (3200 mi) in 1999 when he was turning 50, the Great Divide Trail in 2001 (600 mi) and the Arizona Trail in 2014 (800 mi). He has thought of doing the PCT for several years, but mostly what has held him back was worrying about me and where I would stay and being apart too long. He would love for me to hike with him, but days on end of EAT, WALK, SLEEP just doesn’t appeal to me. Plus, I would hold him back. He wants to do 25 miles a day. Then he read an article in the Jan. 17 issue of BACKPACKER magazine titled I Can’t Stop Now about a 77 yr old guy with the trail name Billy Goat. The article must have inspired him because he started planning. We both decided we would make it work somehow. Now is the time while he still can.We sort of have a Plan but working it out as we go. That’s the way we did it for the CDT trip. It is so much easier now with all the different communications we have. He even has an APP on his iPhone called GUTHOOK. A great guidebook and map of the trail.
I am camped in the nice little desert town of Borrego Springs. I have plenty to do but the population of 2,000 has increased to 10,000 because of the Superbloom which, from what I'm hearing, hasn't happended in 23 yrs.
Plan A is to pick him up in around 7 days east of Anza.

**This explosion of hikers has happened since the 2012 publication of Cheryl Strayed’s memoir WILD. Dick agrees with Billy Goat. He is appalled by the profusion of ill-equipped soul seekers that have washed up on the PCT. “I see a lot of hikers who have no idea what’s in front of them. They just want to drink beer and smoke pot like the PCT is one big party.” 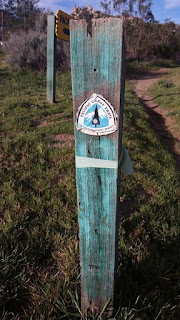 Posted by THE RAMBLING NEWS at 3:40 PM 6 comments: Links to this post