"I learned early that the richness of life is found in adventure. Adventure calls on all the faculties of mind and spirit. It develops self-reliance and independence. Life then teems with excitement. But man is not ready for adventure unless he is rid of fear. For fear confines him and limits his scope. He stays tethered by strings of doubt and indecision and has only a small and narrow world to explore."  - William O. Douglas  Of Men and Mountains
Texas is a different world. Driving through Houston, Dick was singing "Happiness is Houston,Texas in the Rearview Mirror". We noticed a couple of things that probably only happen in Texas. A sign on a library door that read "NO FIREARMS ALLOWED", and another at a little store "FRESH COON FOR SALE". I went into a feed store in a little Texan town and they were giving away camoflage drink holders. I said, "no thank-you". I should have taken it. I remembered someone who would love it for his birthday. While driving the expressway through Corpus Christi we witnessed the police trying to round up a loose steer at a shopping center. It is open range here isn't it? I was behind a couple at a grocery store buying something that looked like packaged lard. I asked them what it was and they explained it was the cow's stomach or tripe. "It's great!" they said. "You slice it up and cook it with beans and chilies and it's delicious." They added that they eat every part of the cow - TMI.
We traveled along the Great Texas Coastal Birding Trail where we visited Aransas National Wildlife Refuge and then on to Padre Island National Park. All along the coast the bird watching was great. Besides the Whooping Crane, another first for me was the Caracara (the Mexican Eagle). I love the white and brown pelicans and the many migrating shorebirds. Around 380 bird species have been documented here. When I asked Dick about what kind of Terns we were seeing, he said, "They're either Wrongs or Rights or they could be U's." This is what it's like traveling with this guy. You should hear him when we're playing cards - he has an Italian accent one night, Mexican another. I keep telling him I prefer Irish. I think he does this to distract me so he can win.
Traveling to Padre Island National Park we turned on the wrong road because of our GPS. This time after Dick yelled at it, he apologized because we ended up at a free ferry crossing to the island. It saved us a lot of miles in traffic and it was a beautiful ride with schools of dolphins playing all around the ferry. Padre Island was great. We stayed nearly two weeks. We visited this place in 1979 and parked our car and trailer on the beach but we weren't so sure we'd do that again. If you want to read about our 1979 visit CLICK HERE 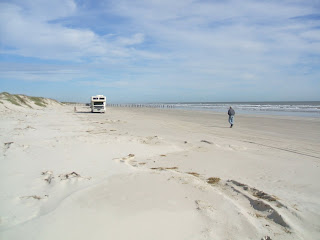 At first Dick said, "No way will I drive our rig out there." Then he decided to do it after watching others. It is hard to believe that you can drive out on the sand and not get stuck. We had equal amounts of rainy and cold days and sunny and warm days. We stayed in the campground for a few days then moved to the beach. We watched the waves and sunrises right out the motor home window. Two storms forced us back to the safety of the campground where the winds rocked the motor home all night. The Texas coast is noted for its heavy rain squalls. It was nice to be back in the shelter of the campground because most of the RVs were decorated for Christmas and it was Christmas Eve.
The National Park embraces close to 70 miles of sandy beaches with a variety of shells and birds and we loved watching the Ghost Crabs. We were told by the ranger the best time to see the crabs is at night. So we went out with a flashlight and watched and waited for quite awhile but saw nothing. We commented that the ranger didn't know what she was talking about because we saw more in the daytime. As we turned around to head back to the motor home, there in our path was a huge crab watching us. We also startled a big buck that ran in front of us.  I picked up a couple sand dollars and brought them into the motor home to dry out. Funny Face started acting weird. She slunk low to the ground, acting like there was a lose snake under the chairs. We were looking under everything when I finally thought of the sand dollars and put them back outside. Then she acted normal again. We were told the next day that the darker sand dollars were still alive. I felt terrible - that poor little creature.
One morning it was calm enough to watch a few dolphins off shore, but mostly the surf was a constant roar. There were a pair of coyotes that came down to the beach a couple times a day. We never figured out what they were after. We couldn't let Sheba out on her leash alone because we didn't want to reel her rope in and find only a collar at the end - or a coyote.
There is a sad side to this little piece of paradise. There is a lot of trash that washes up on the beach. We were told that the predominant southeast wind drives the currents in the Gulf of Mexico to this location in the Northwest corner. As a result, anything that falls or is tossed into the Gulf eventually ends up here. Trying to keep all these miles of beach cleaned up is never ending.   SHORELINE CLEANUP
Slowing down and being one with nature makes you wonder about things you see every day but you don't take time to understand. There were nights the sky was so dark and the constellations so clear. To think that we used to navigate by them and tell time by them. Or seeing the changes in the tides and learning how the gravitational pull of the moon and the sun affects the tide level.
Padre Island National Park was a wonderful place to spend the holidays and if the sun would have continued to shine, we may still be there. We decided we'd better head away from the ocean spray or we may begin to rust.
Link to Dick's Blog PADRE ISLAND NATIONAL PARK
Posted by packtoter at 2:10 PM 4 comments: Links to this post

“When I die I want my heart and soul fully seeded with rich stories and experiences.” - Dawna Markova

Dick and I left home November 30 beating the first snow in northern Michigan. We would have waited until after Christmas if Maggie would have been home, but we were grateful that she decided, since she had just been home in November, she’d rather fly down to meet us somewhere warm this winter instead. We’ll never forget the time we left Michigan in January 1978 and got off the expressway in Kentucky not realizing the off ramps and side roads were glare ice. The 30 foot travel trailer we were hauling started to pass us on the left. Fortunately, we straightened it out by using the hand brake. A wrecker had to get us back out to the expressway!

To get into the spirit of the holidays, I have decorated the motor home a little bit with red candles and a vase of red berries and greenery from the woods, and I belt out a Christmas carol now and then.

We arrived in Nashville, TN, after driving two days, to begin a week of exploring the Natchez Trace from Nashville, TN to Natchez, MS. A beautiful National Scenic Parkway that has preserved our nation’s natural and cultural heritage.  http://www.nps.gov/natr/index.htm 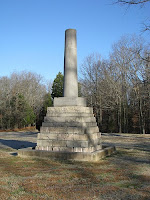 Whenever we start a trip it takes a few days to decompress. Going from a busy lifestyle to becoming a laid back RVer can take some getting used to - believe it or not.  Being together practically 24/7 is an adjustment. Keeping this small space clean is easy but we do have to be more organized living in 30’ motor home. Laundry is much less. At home I do a load every day but on the road it’s once a week. There are many changes from home, but after a while we get into the swing of things. Because of this life style we have more time to read and write. When we have a phone connection we can watch the news on the computer. We are not big TV watchers anyway. We play cards which we never do when we’re home, and we hike in a different place every day. Some of my favorites along the trace was visiting the grave of Meriwether Lewis, seeing the fields of cane and cotton, the bayous and the beautiful Magnolia trees (the MS. State tree and flower), visiting the town of Kosciusko, MS. just off the Trace, where Oprah was born and raised, touring the Mount Locus Stand (one of the oldest buildings in MS. dating back to 1780), and hiking where my Choctaw ancestors at one time lived (a spiritual experience for sure). We visited several of the towns just off the parkway. My favorite was the city of Natchez. Driving through downtown felt like we were on a movie set. Many huge southern plantation mansions. Before the Civil War there were 35 millionaires in the U.S. and Natchez had 12 of them. We toured Melrose Mansion and reading the history of slavery in an exhibit there was moving. http://www.visitnatchez.com/

I love listening to the southern accent in this part of the country. The blacks seem to have a different southern slang than the whites. It’s so amazing to listen to these southerners, but sometimes difficult to understand. Another thing I notice is everyone is laid back and friendly.

We have made friends with a couple from Ontario who we met the first evening at a campground on the Trace. We keep meeting up with them along the way which has been fun. They talked us into camping at a casino in La. We live four miles from one in Michigan and never go there but decided to go in and check it out. We were in the mood for some good Cajun cuisine but the menu prices were outrageous. We lost $15 in the slots in just a few minutes and left smelling like smoke. We just can’t figure out what the attraction is. We did think it was great how someone kept offering us free drinks. I made cajun rice & beans in the motor home and I won at a game of cards. Now that’s more like it. 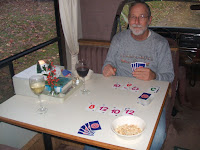 Our two cats are with us. Funny Face did jump out of the motor home one afternoon and explored the whole campground. She finally came home after dark. I’m not sure how she knew which RV was hers. We told her she better be careful or she’ll end up being a southern cat and living in the bayou.

It has only been warm enough one night to open our windows. We keep traveling south and hope it warms up soon. We watch the weather up north and Dick is so happy he doesn’t have to shovel snow.

Posted by packtoter at 4:27 PM 2 comments: Links to this post