As you know from the last blog we were visiting my sister in Foresthill, CA. We only planned to stay for eight days. We always say that and then end up staying two weeks. Last year we were there for my niece's (Julia) wedding. The timing was right this year to visit when her baby was due to arrive. Her due date was May 13 and we said we wouldn't leave until the baby was born. 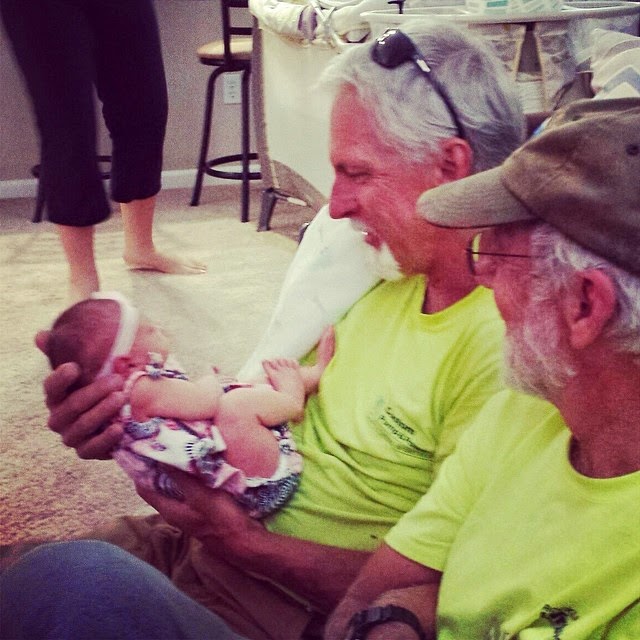 We're heading for Yellowstone National Park for a few days. Today I happened to see on Facebook that some friends we met in Florida a couple winters ago were traveling the same route as us in Idaho. They from the east and we from the west. I kept checking in on Facebook chat and it was amazing how the timing was perfect that we could meet at the exit they were taking south. We had a nice picnic lunch together.


From Yellowstone we're continuing east to the Winnebago Factory in Forest City, Iowa.  It's nothing serious, just want to replace a few things. Along the way we'll visit several of our favorite places in South Dakota and then from Iowa on to Michigan where we plan to visit Marlene and Dave Ferguson who are hosts at Burt Lake State Park in Indian River. They want Dick to give a campfire talk about his Arizona hike. We'll camp a night or two before heading on to the Ole' E Ranch (Oleo Acres). I'm looking forward to being home for awhile. To all of our family and friends, if you're driving by, you'll know we're home if the lawn is mowed. We would love to see you. 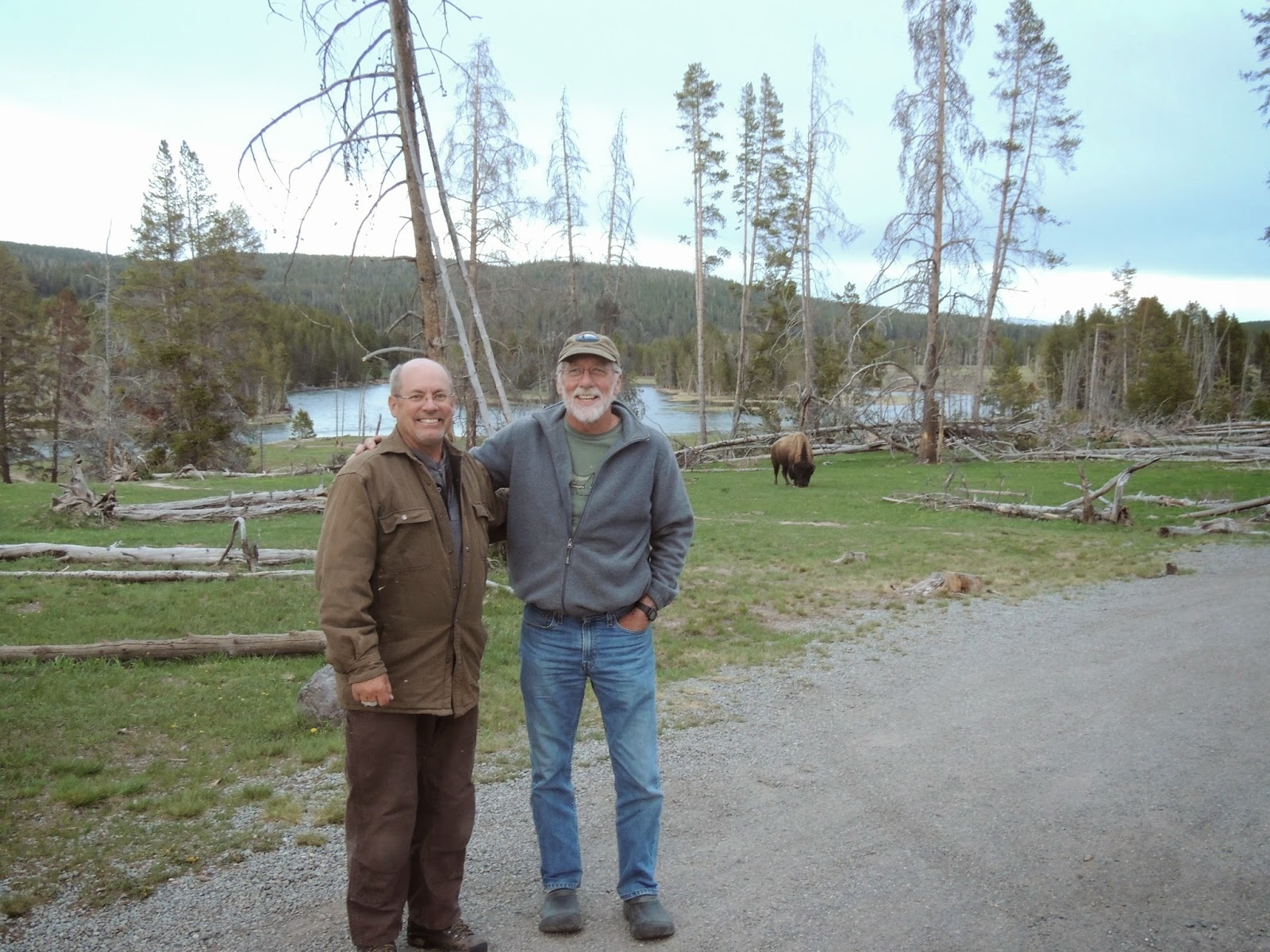 While in Yellowstone National Park our friend Bob Howell from Bozeman just happened to be in the park doing some night photos. We connected for a great evening visit. Yes, that's a buffalo grazing in the background. Check out his website - amazing work. http://roberthowellphotography.com


Posted by THE RAMBLING NEWS at 2:14 PM 2 comments: Links to this post

You are all wondering if Dick is done with his hike. He’s finished and now food is his number one priority. With no meat on his bones he does need some fattening up. Also, his legs never stop moving at night. Soon he’ll return to normal, whatever normal is for Dick. He’s saying this will be his last long hike and will stick with shorter 100 to 200 mile hikes???
To read about the last leg of his hike click here:  http://lookingatlifethruoneeye.blogspot.com/2014/05/finishing-at-utah-border-after-week-of.html He’s also added a Youtube video. Put on your own music for background listening.
After the Grand Canyon we traveled north to visit our friends Mike & Rochelle in Utah. They are the ones with the Smith Hotel in Glendale who we visited last year in Mormon country. 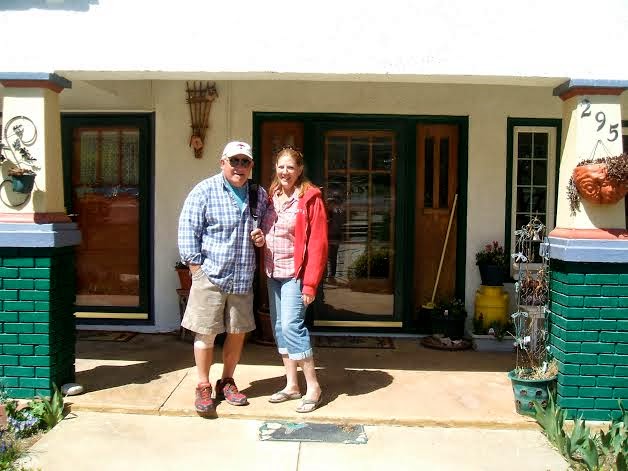 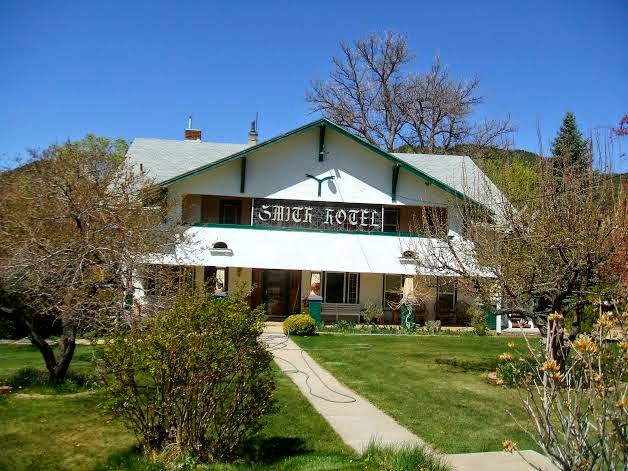 While visiting them Mike helped Dick make a bowl out of a chunk of aspen. It was my Mother’s Day gift. Then Mike taught me how to make Sushi and we made enough to last me a couple of days. Yummy. 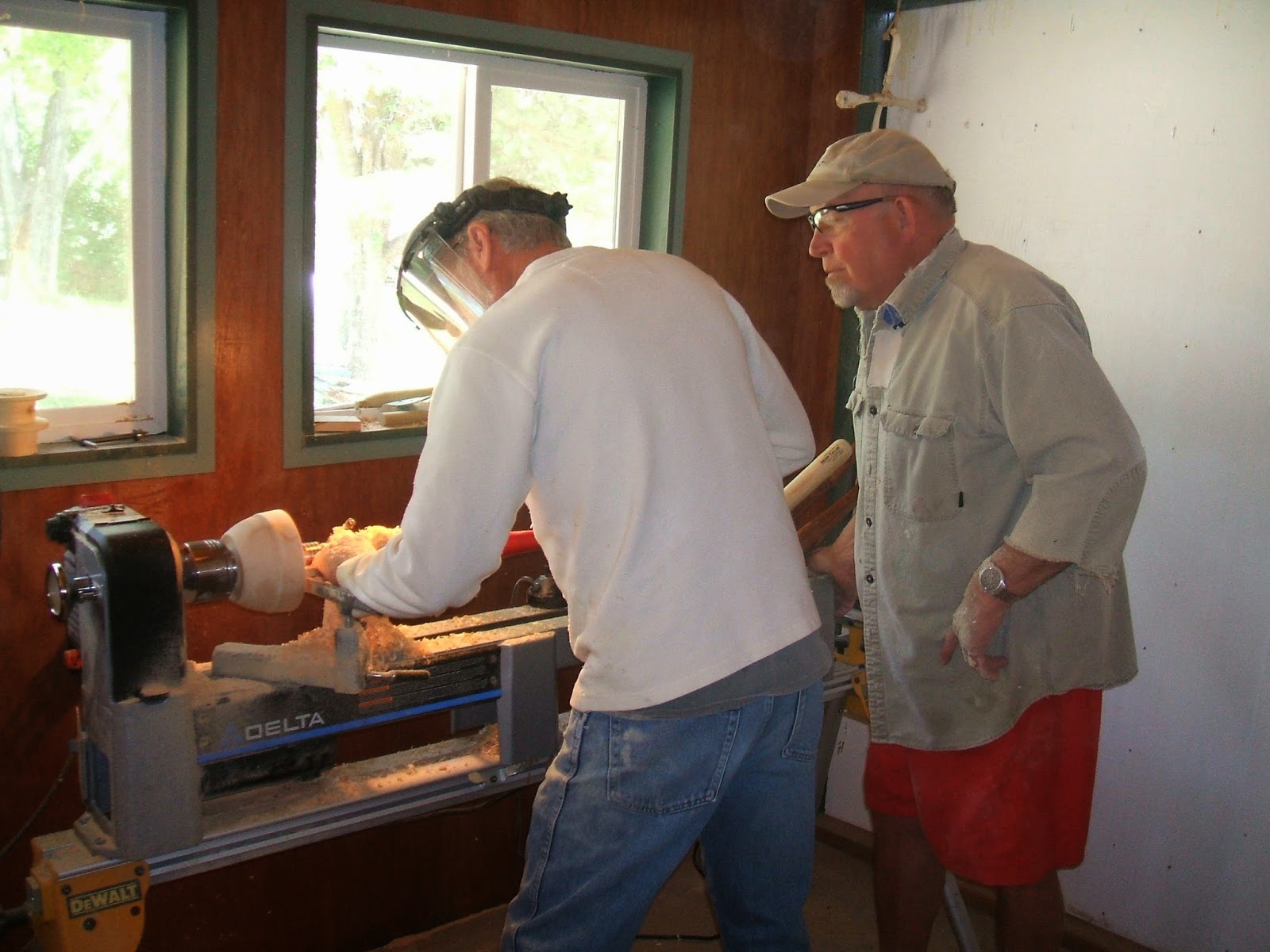 We then headed west across desolate Nevada. We were told there was a nice Rest Area a few miles before Tonopah that we could stay overnight. But when I saw the REST STOP sign full of bullet holes we decided to move on. Besides it was only 1pm. We ended up at a campground north of Lee Vining, California. We were also warned to make sure we filled up with gas in Nevada because the gas in California was very expensive. The cheapest we could find was $3.90/gal. in Tonopah. Our Gas Buddy App said it was only $3.85 in CA. so we just passed Nevada gas by. We squeaked into Lee Vining running on empty and found gas was $4.99/ gal. Dick wasn’t a happy camper. He decided to only get enough to get us 90 miles north to Minville, NV which wasn’t that much out of our way, where it was $3.85/gal. There we bought enough to last until we leave CA.
We met my brother at Bear River Resort for a couple of days before heading for my sister’s in Foresthill, CA.  Joel took time off from work to camp with us. 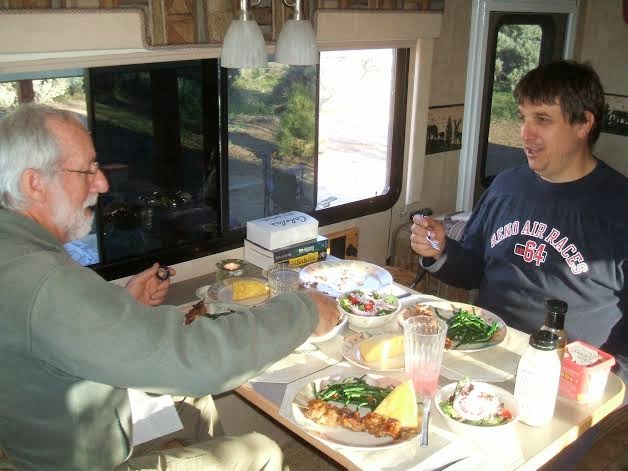 He brought his boat and would get up early to fish for 4 or 5 hours. Dick’s not a fish eater. He said, “If cows could swim he’d be out there too.” Joel must LOVE to fish to be out on his boat by 5:30 a.m. He did enjoy catching several Mackinaw. Then we'd make a huge breakfast  when he returned. 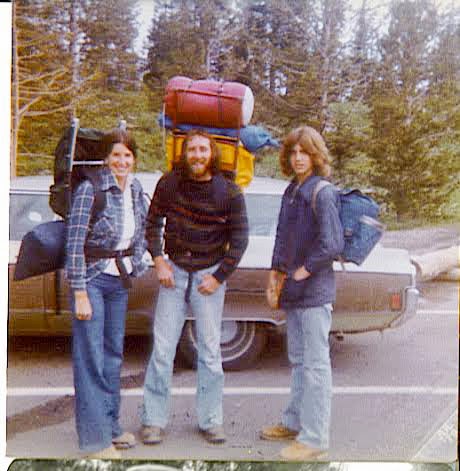 Above is a picture of our first camping trip with Joel in 1978. He was about fourteen. 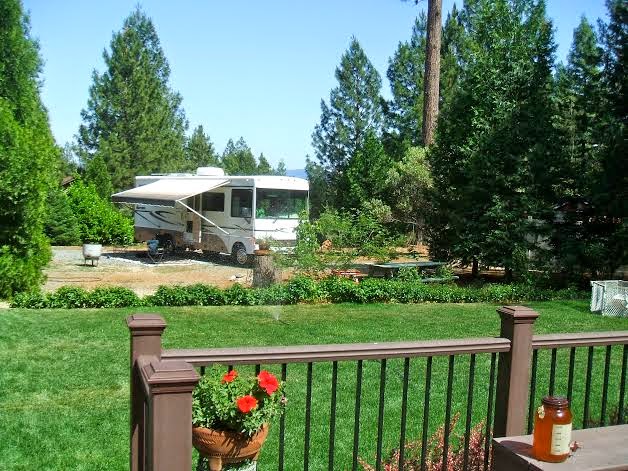 We have just arrived at my sister's where we set up camp for 8 days. 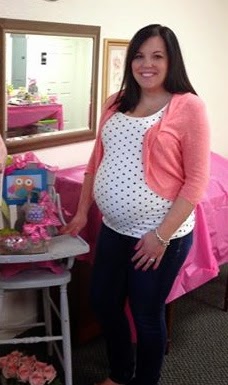 Remember last year we were here for my niece's wedding. This year we're in time to meet our grandniece who is due to arrive any day.

Posted by THE RAMBLING NEWS at 7:38 AM No comments: Links to this post 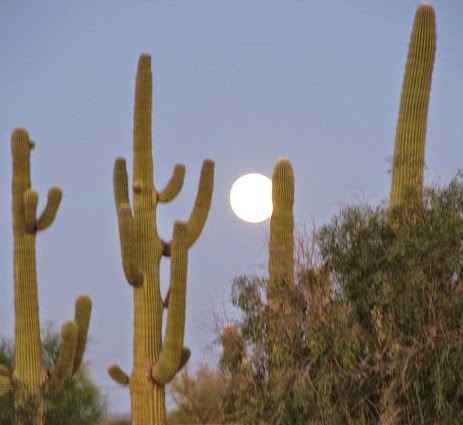 I enjoyed my stay at the Desert Gardens RV Resort outside of Florence, AZ.  A beautiful time of year to be down here in the desert. There was lots to do and I had no time to get bored while Dick was gone 18 days hiking the AZ Trail. 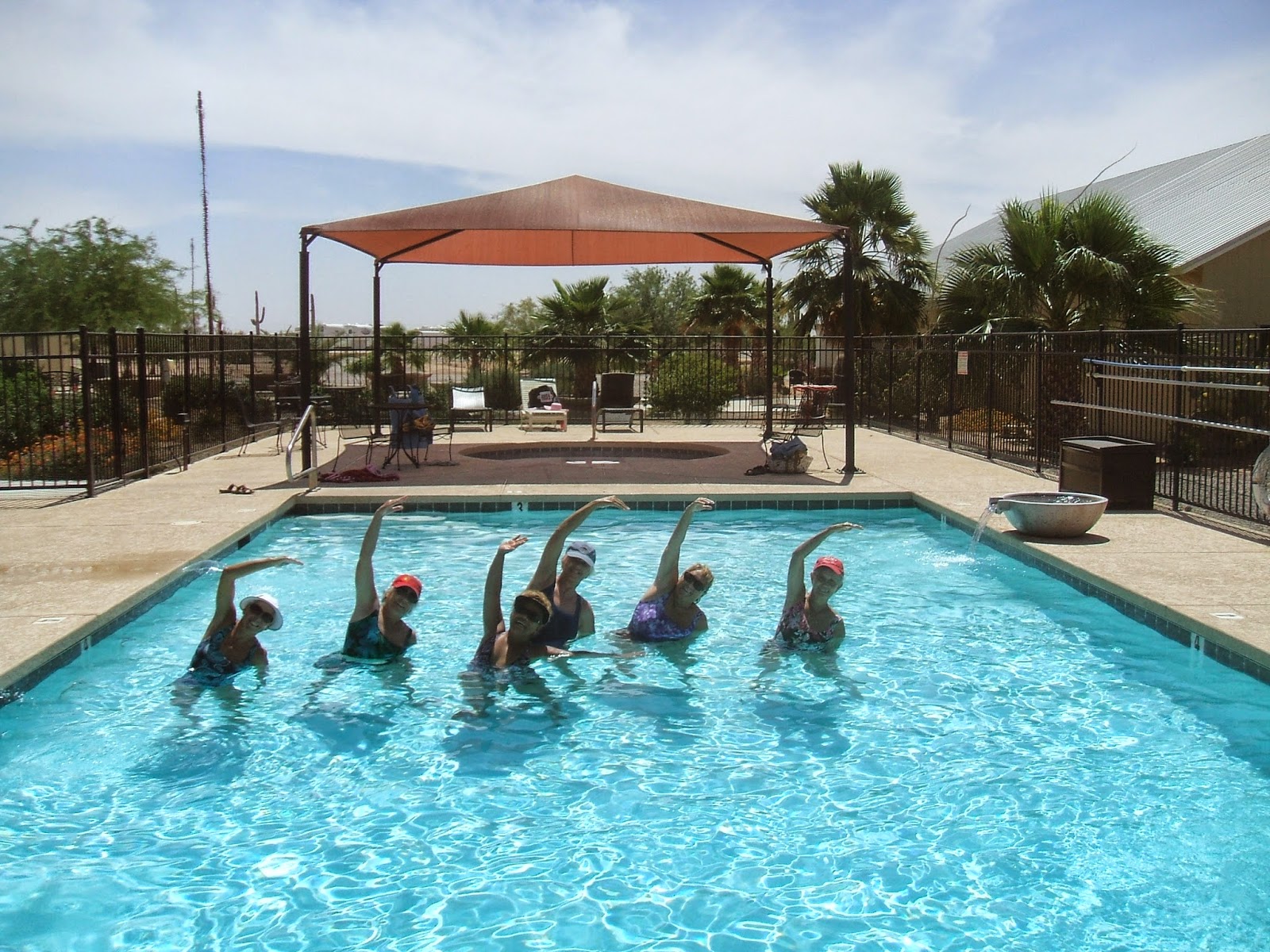 Besides being close enough to visit with my parents a couple days a week, I met a group of people in the park who played Cribbage and other fun games several evenings a week. I also joined the water aerobics group. I made some lasting friendships. They all wanted to meet Dick when he returned and planned a little dinner get together. I think they were beginning to wonder if I made him up. When he reached the Grand Canyon he took a shuttle back to the Phoenix airport where I picked him up. Driving in that traffic was awful. I'm thankful I don't have to do that every day like most of those people.

The day we planned to leave Desert Gardens, Dick was very ill. We didn't know if it was giardia or food poisoning. He was up all night and not doing well that morning. We had reservations at Deadhorse State Park about 170 miles north in Cottonwood. I drove while he slept on the couch. He was feeling better by the time we got there but slept most of the afternoon. By the next morning he was a new man. Fortunately, it wasn't giardia. Considering all the mud puddles he's drank from, it was a concern even though he purified everything.

While we were in Cottonwood, a distant cousin of Dick's visited us. (John is Dick's dad's mother's brother's son's son - got that?) He has been following our blog and connected through email.

I am now camped at the Grand Canyon and Dick left from our campsite Wednesday morning to complete the last leg of he Arizona Trail. He expects to reach the Utah border in about four days. At that point he'll decide if he wants to walk back to me at the Grand Canyon or call it quits and have me drive the motorhome up to meet him. I think it will depend on the weather. 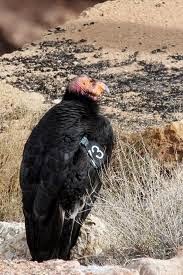 This place is truly a wonder of the world. It makes you stop and realize how truly small you are and that we're just a speck in time. I love the beautiful historical buildings and the beauty surrounding them. Lots of wildlife too. While walking on the rim yesterday, I saw California Condor F-3 and later spotted several elk while riding my bike. This park is biker friendly. This is a wonderful place to be while Dick is hiking but I'm thinking of hanging a sign around my neck that reads "CRIBBAGE ANYONE?"  I got hooked on playing cards with my group of friends at Desert Gardens. Problem is, I may not find anyone that speaks fluent English. There are people from every corner of the world here. Dick calls this the UN of the National Parks. 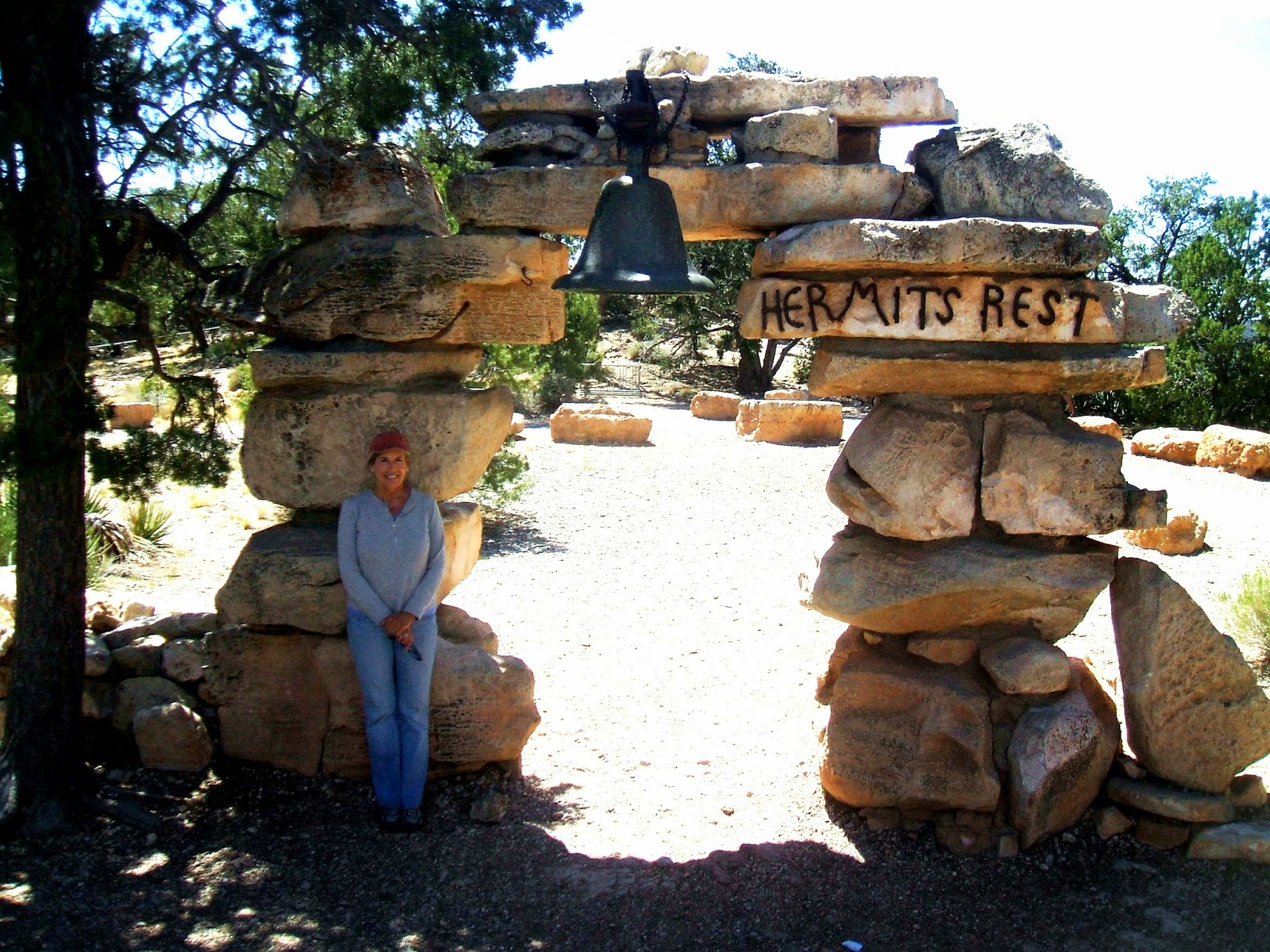 (Above) At Hermit's Rest, one of my favorite historical areas in the park. 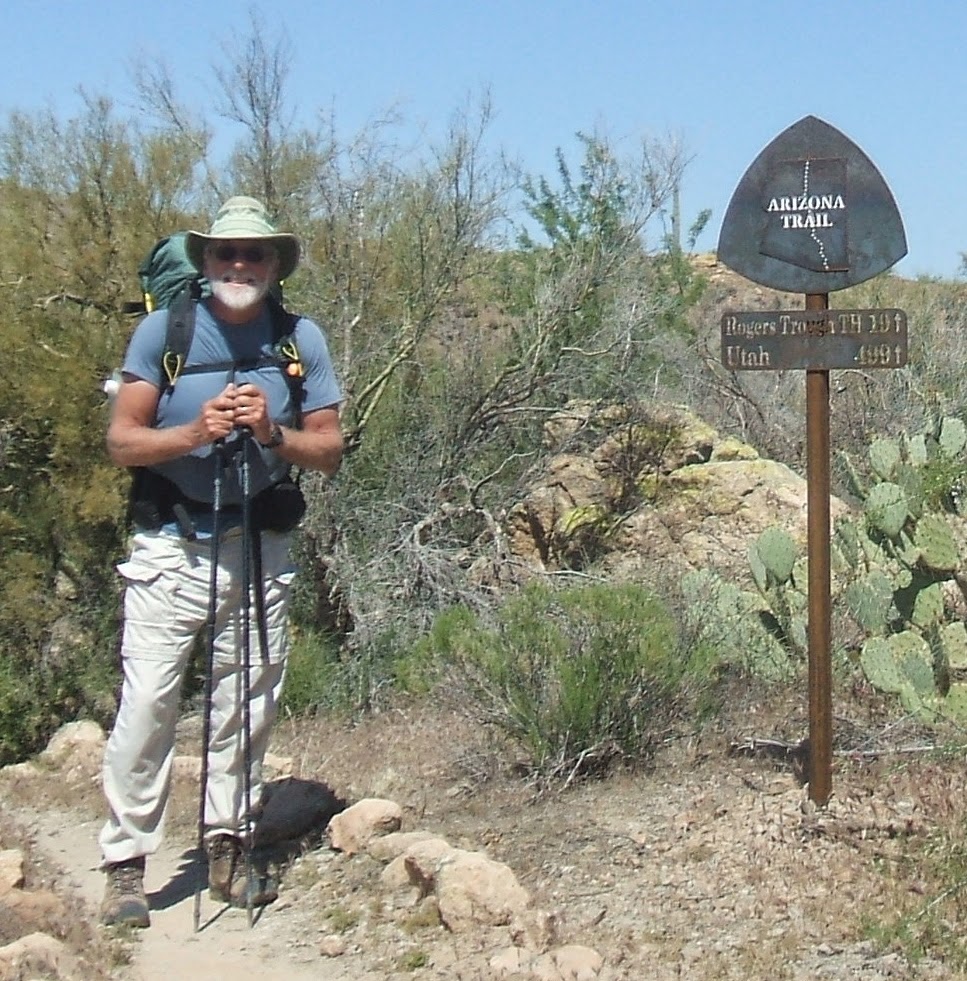 For those who want to catch up on the happy hiker. Here is PART 4 of his blog:
http://lookingatlifethruoneeye.blogspot.com/2014/04/azt-superior-az-to-grand-canyon.html


Posted by THE RAMBLING NEWS at 7:30 PM No comments: Links to this post