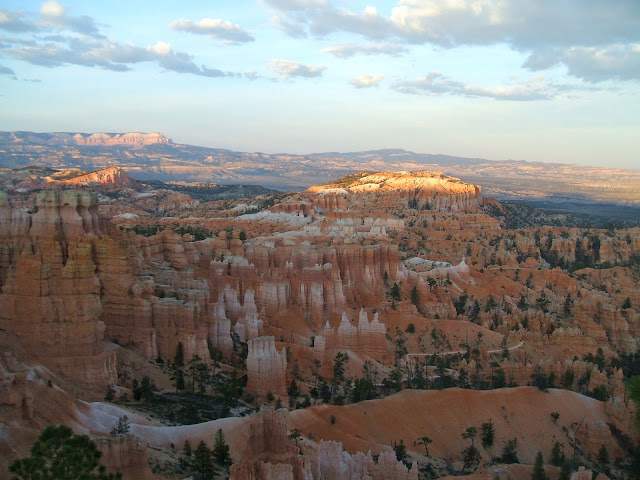 Our stay at Bryce Canyon National Park was amazing. We timed it right and the weather was perfect. One word to describe this place is - WOW! We were there over Mother's Day and my request was breakfast together at the lodge and for Dick to take a hike. I so enjoyed my 6 hours of alone time and Dick is always up for a hike.
This time my photographer in residence put together a Youtube video of Bryce Canyon and even recorded his own background music.  It's difficult to capture the beauty of this place with photos but it's the next best thing.  CLICK HERE FOR DICK'S PICS

Before heading into Nevada, we once again visited Mike and Rochelle Schlins at their B & B in Glendale, Utah. It's their busy time with lots of guests, but they made time for us. It's always fun to connect with friends. As soon as we arrived Mike met us at the door and said, "Guess what we bought - an RV!" Were we a good or bad influence on them? They are so excited to sell their B & B business and travel. We made plans to try and meet sometime this summer in the Rockies.
We're heading to California for a family wedding and chose
to drive "The loneliest road in America" (Hwy 50) across Nevada. Most of the towns we passed through were former mining towns or relay stations from the Pony Express days. One of the most interesting towns to me was Pioche - a living ghost town. About 900 people live there today, though it had 8,000 people in the 1860's mining boomtown days and during that time it was known as the baddest town in the West; badder than Tombstone, Dodge City and all the rest. We were told it was so bad 72 people died before one died a natural death. Passing through Pioche felt like we were time traveling back to the wild west days.
Nevada is an interesting state. In some ways it's STILL the wild west. It's very lenient with marriage and divorce proceedings, gambling is legal anywhere and everywhere and the state allows legal prostitution. It was very evident in some of the areas we passed through. Now it's on to California and family time.

**For a few days we were camped next to a heard of these cows. They're called Belted Galloways or the "Oreo Cookie Cows". 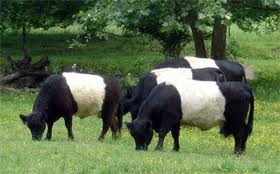 Posted by THE RAMBLING NEWS at 3:16 PM 3 comments: Links to this post


It's a quiet Sunday afternoon, with nothing happening, so I decided to catch up on where we’ve traveled since I last blogged. From Arches and Canyonlands we drove through harsh desert into Capitol Reef’s lush valley along the Fremont River.  The history of an area is what interests me. From indigenous people to Mormon pioneers this fertile area was used for thousands of years. The early Mormon pioneers planted orchards of peaches, cherries, apricots, pears, apples, plums, mulberries, almonds and walnuts and now the National Park Service maintains the orchards with historic cultural practices and the public is allowed to pick the ripe fruit. We were there the wrong time of year to enjoy the fruit, but we did enjoy the fresh baked scones, bread and pies from the Gifford House. This farmhouse was built in 1908 by polygamist Calvin Pendleton, along with a barn and smokehouse. Eventually, it was purchased by the Gifford family where they lived for 41 years. In 1969 they sold the farm to the park.  Now the Gifford House is a Natural History Museum, gift shop and bakery conveniently located next to the campground.


We also enjoyed a few hikes to overlooks and remote canyons to view petroglyphs, pictographs and names etched onto walls of pioneers that traveled through in 1871. Now it’s called graffiti and we did see a lot of that too. I love to hike but 8 miles is about my limit. I enjoy and prefer 2 to 4 mile day hikes. Most trails require some steep uphill climbs and I'm always huffing and puffing on the uphill and stopping now and then to rest (and anyone else we meet is doing the same).  Not Dick! I think he’s part mountain goat. I hear no huffing and puffing and he only stops to rest to take pictures. Then when we’re done with a 3 mile hike, he’ll head out on another 8 mile hike. Amazing!

NOTE: Remember Aron Ralston?  We drove by the dirt road that leads to the slot canyon, which is in a very remote area southwest of Canyonlands National Park, where Aron was hiking when a boulder dislodged and he was trapped for 127 Hours (also a movie by that title Movie Trailer).  This is also the same area as Robbers Roost the outlaw hideout for Butch Cassidy and his wild bunch gang. This rough terrain is difficult to navigate into without detection.
NOTE: In the Utah/Arizona border area we saw many women dressed in long pastel blue dresses that looked like they walked off a Little House on the Prairie movie set. We were told different stories of the polygamy that still exists today in certain areas of the US. After hearing all these stories and seeing what I saw as we drove through the town of Colorado City, AZ and other small UT towns, it peaked my curiosity and so I've been reading different bits of information about them. In the early 20th century, the FLDS church splintered off from the mainstream Mormon faith and took up shop in the twin border towns of Colorado City, AZ and Hildale, UT. There are a lot of misconceptions about the FLDS community (Fundamentalist Ladder Day Saints). A lot of people mistakenly lump FLDS polygamists in with the LDS Mormon faith. The fundamentalists strictly adhere to what was originally a tenant of Mormon faith (being polygamy), while the LDS church has since disowned the practice. We were also told that many polygamists leave their homes in a suspended state of construction because this allows them to avoid paying some type of taxes on the properties. Yes, the homes (large homes) in these towns were left unfinished on the outside but I haven't found any information about this fact.

Posted by THE RAMBLING NEWS at 12:47 PM No comments: Links to this post

While visiting Canyonlands and **Arches National Parks, we set up camp outside the parks in BLM or NF campgrounds at $5.00/night (with our Senior Discount Card) and left the mother ship either at dawn or dusk. We'd head into the parks before the crowds to hike and get just the right light for Dick’s Pics. I need not say more about these beautiful parks - a picture is worth a thousand words. Click here for DICK'S PICS.

While in Moab, I received an email (just in time) from friends we met in 2009 in Texas. They knew from my Blog that we were in the Canyonlands area of Utah. They live in Bozeman, MT and traveled to Moab to participate in the 10th Annual Photography Symposium We spent the afternoon together and had a chance to see the incredible photography and hear the keynote speaker. BOB'S PHOTOGRAPHY
**I see Arches NP eventually going to a shuttle system like Zion NP. There is so much traffic and sometimes no parking spaces. This is a very popular well-used park. A lot of it has to do with its close proximity to Las Vegas. We see so many rental RV’s in Utah and Arizona. People fly in, pick up their RV and head out to explore all the National Parks. Lots of foreign people too. Dick was hiking to Landscape Arch and passed a guy and said, “Howdy.”  The guy stopped and said, “Wow, you speak English!”
I just had to share a couple of interesting RV's. We see all kinds!

Posted by THE RAMBLING NEWS at 2:38 PM No comments: Links to this post