In my last blog, I told you about the month long Python Hunt taking place in the Florida Everglades. It's been nearly 3 weeks since that blog and many of you have written asking if we're ok. We are alive and well. We didn't see one python, but I've heard the latest caught is around thirty. Actually, the hunt is in the areas surrounding the National Park. Inside the park is off limits.
We loved exploring this beautiful place - canoeing, biking, hiking, and ranger led hikes including a slough slog. That was exciting, especially after we walked out of the slough and saw a huge alligator at the edge of the water. Even the ranger was shocked. This was the third time she'd led the slog and I had the feeling it was her last.
We especially enjoyed spending time with friends from home who also camped at the park (Kathy Heil, Dave Monstrey, Bill and Laurie Bassett - pictured below).
We walked the Anhinga Trail many times. Dick put together a nice group of pictures taken along this trail:  CLICK HERE TO VIEW PHOTOS OF THE ANHINGA TRAIL

Also, I'm adding a Youtube video Dick put together. He never tells me when he's filming so all my comments are in there too. We are going to have to come up with a signal to let me know when to shut-up!

Dick has applied online for a volunteer job in the Everglades National Park over the past two years. They offered him a job running the Recycle program and mowing but he turned it down. He said he'd rather do something more exciting like hunt Burmese Pythons. Well, now he has the chance. When we arrived at Big Cypress National Preserve we heard about the "Florida Python Challenge". It began January 12 and runs through February 16. The invasive species has been taking over the Florida Everglades area so this is one way they can cut down on the population (snakes not people). Prizes include $1,000 for the longest python caught, and $1,500 for the most pythons killed. Around 800 amateur and professional hunters have joined the python purge, but Dick's changed his mind about signing up. We listened to a local radio station interviewing Dave Shealy, who has a commercial campground and a wildlife zoo in the Big Cypress Preserve. He was told about a python in the area. Dave doesn’t handle snakes much so he took his zookeeper along to catch the snake. They found a large python lying in a ditch along Hwy. 41 (Tamiami Trail). The zookeeper jumped in the ditch and grabbed the snake. The snake bit him. Dave said the zookeeper actually found that humorous and he came out of the ditch with the snake coiled around him and tiptoeing like Tinkerbell. Dave said he didn't know what to do and knew he'd need help, so he shoved the snake wrapped man into the back of his truck and sped home. Dick said if he did sign up for the Florida Python Challenge, this sounded like the perfect technique for catching snakes. He just couldn’t get me to go along with the plan. He said he was going to locate the snakes with his good eye and I was supposed to jump in the ditch and grab the snake.  NOT!!

After Paynes Prairie we stopped to visit Les and Jane of the Mallery Clan and then continued traveling south to explore Highlands Hammock State Park near Sebring. The hikes on the swamp boardwalks along the Cypress Swamp and Fern Garden Trails were our favorites. We are now in Big Cypress National Preserve in south Florida for a few days, camped on the edge of Monument Lake, and it's only $8.00/night with our Senior Pass. One of the reasons Florida is unappealing to us is the over development. As Dick says, "If someone dies in Michigan they have to send down here for pallbearers". Actually, that's all part of traveling and you have to deal with that anywhere you go. We try to stay away from the madness of over-populated areas with their masses of humanity as much as we can. When we reach these beautiful state and national parks it makes it worthwhile. 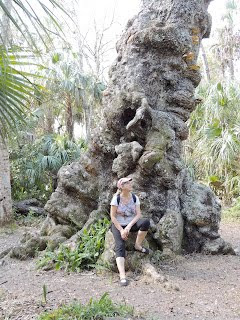 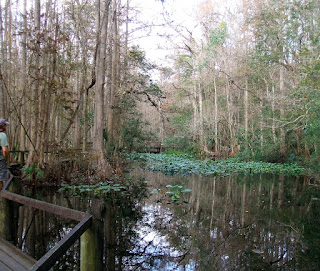 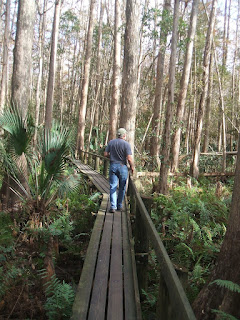 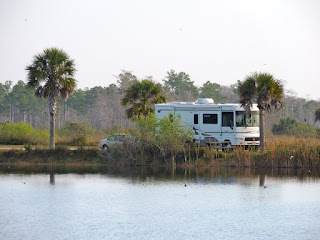 Posted by THE RAMBLING NEWS at 11:11 AM No comments: Links to this post

Our week at Paynes Prairie was wonderful. Dick said it perfectly in his blog so I'm passing the link on to you. We are both disappointed with the quality of his pictures. For some reason they are a bit blurry when he puts them on YouTube but it's still amazing to see all the wildlife at the Prairie. Enjoy!  CLICK HERE FOR DICK'S BLOG