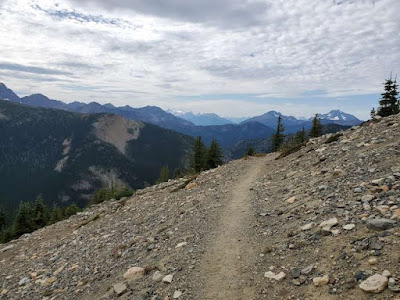 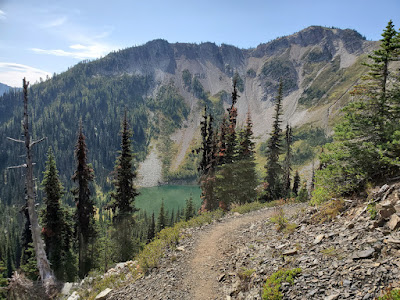 GAILA: As you all know, Dick made it to Canada on September 6. He then hiked another 8 miles to civilization at Manning Park. I met a cat lover in the park that would take care of BOO for 4 days and left the morning of the 7th to drive 6 hours to meet him. We stayed the night at the lodge there. Thank goodness there was a hiker facility where he could do laundry and shower before I arrived. We put his backpack in a large garbage bag so I wouldn't have to smell it on the trip back to Chimicum. Each time we went to eat at the restaurant in the lodge, someone would say, "Hey, there's Umbrella Man." From there we stopped in Chilliwack, B.C. and stayed two nights with good friends, where they began the fattening up process. He lost around 30 pounds overall and now has a long way to go to get back to his normal weight.

Here are his last few texts from the time he left Stehekin, WA to Manning Park, B.C.

The international flavor never ends. I am now in a new bubble for 80 miles to the border with a guy named Shakespeare who looks exactly like Sean Connery. He is from England but lives in Amsterdam. Then there is Metric Ton who, you guessed it, carries a huge pack full of shit. He is French Canadian. There is also Jungle who is Brazilian, Jacob, a 17 year old who is a great kid, and a German that I can't understand enough to know his trail name.

Stehekin means "Way through" an ancient passage into the mountains. It's remote, laid back, beautiful and expensive. Everything comes in by ferry. It's not a bad place to be stuck waiting for resupply, but better planning would have had me in and out of here in a day. I have been very fortunate with weather, only a couple rain days but not a big deal, I'm Umbrella Man! In fact, it started raining the day I finished.

I left Stehekin later than planned. By the time I picked up my resupply box and got everything organized it was 12:30. I missed "trail Magic" this whole trip but was fortunate to run into it twice over these past four days.
When I reached the Canada border it was anti-climatic. Unfortunately, my bubble group was not there. I took lots of pictures, ate dinner and moved on into Canada. PCT - Check ✔

I took lots of video but working on putting it all together.

Posted by THE RAMBLING NEWS at 9:21 AM 9 comments: Links to this post

I'm writing this on Sept. 2nd and the HAPPY HIKER has now reached Stehekin, WA. He arrived Saturday after the post office closed. So he now, because of Labor Day, has to wait until Tuesday morning to get his resupply box with his food. He says it's a beautiful place to be stranded. The problem is he doesn't have any food so it's a 4 mile round trip hike to the PASTRY COMPANY which serves croissant sandwiches, pizza slices and all sorts of baked goods. Heaven to a hiker.


Here are his Texts over the past couple weeks:

August 21: (south of Snoqualmie, WA)
Having a hard time sending my inReach message due to rain, overcast and dense forest. I have about 18 more miles to the Summit Inn but will hike in early tomorrow. Looks like you've been getting quite a few Squirrel Poster orders! That should help pay for this trip - NOT! 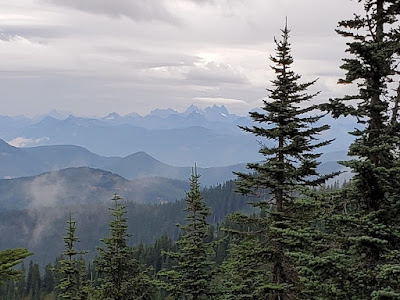 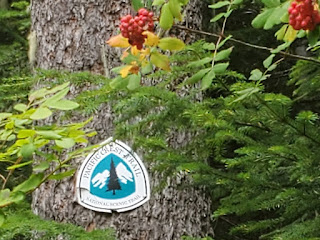 August 22:
I'm three miles from Snoqualmie Pass, I-90. An English guy told me about a hostel with dinner at the pass for 20 bucks (not on my Guthook App). I plan to stay there tonight since it's been raining all day.  The first half of the state of Washington has been surprisingly flatter than I anticipated, BUT the last couple days into Snoqualmie pass is an example of what's ahead. The terrain is now going to blow up and I'm going to slow up. My shortest day since California has been 27 miles. Oregon was mostly 30+ miles. I'm thinking the remaining 250 miles is going to be more like 15 mile days. I have several passes ahead that look like 4000 ft. - ups and downs. My boots are on their last legs. Pun intended. I could throw my shirt and pants away right now, they are so tattered and torn. I wonder what trail name they would give me then? I will spend the day at Snoqualmie gluing and Gorilla taping them together. Works better than sewing. I thought I brought enough Gorilla tape wrapped around my hiking poles, but running low.

August 23:
Had breakfast and got my resupply box but I got to the Summit Inn too early so now I have to wait til noon to get in my room. Should have slept in at the hostel but I'm so used to getting up at 4 or 5 a.m.  So I'll just wait in the Lobby since it's raining. I don't smell too bad since I had a shower and did laundry at the hostel (at least I don't think I do). I will need to wash my clothes again here because once just doesn't get all the dirt out.

It's interesting how you meet people on this trail. At first it's a quick hello as we pass, but if they end up being in a bubble with you for a few days or weeks, the conversations get longer. I have met many incredible people from all over the world. It makes you appreciate the human family. I guess our common glue is the desire to do this trek, but I think there is more to it than that.

I am so glad I was told about the WAC Hostel. It was such a comfortable hostel stop, filled with an evening of conversation with an international perspective, in contrast with the night before hunkered down in my tent, under a fir tree in a downpour. 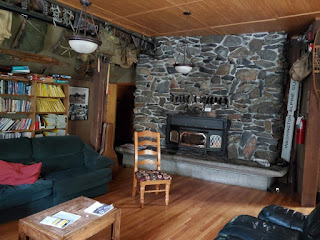 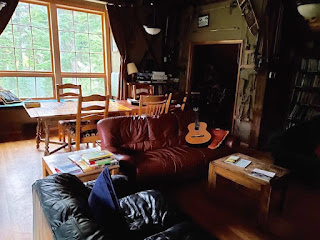 SHREDDER, the girl from Bavaria, and JP showed up here, so the bubble is catching up to me again. I don't take as much time off as these young hikers do. They are faster hikers than I am. They take days off and then end up catching up to me again. It's like the Tortoise and the Hare story. Another interesting kid I've been hiking with is STREAMER. He does contract freelance work and lives on a sailboat in Fort Lauderdale when he's not hiking. I see him a lot. He sleeps in later in the morning but hikes into the dark at night. I get up at 4 a.m. and pass him sleeping in the morning. Now when I pass his bivy tent, I yell "Top O the Morning to ya Streamer." I'm his wakeup call. By noon he has passed me and then we start the whole process over the next day.

August 27: (Stevens Pass Lodge, WA)
It took me 3 days to get here from Snoqualmie. Beautiful, big country and much steeper terrain. With 8 billion people on the planet, last night it was just me and a barred owl sharing a huge piece of old growth forest. Doesn't get any better than this! A bit rocky and rooty hiking tho. I fell into some boulders and landed on the wrist with the titanium plate. That doctor that screwed my wrist back together years ago, did a hell of a job. It didn't even dent it this go round. Then the next morning I walked into a swarm of bees and one stung me on the same wrist! I still have a welt and scab from tripping over a root last week.
I found food at the lodge, not cheap, but it's the only game in town. The problem with slowing down and doing less miles each day, is stretching my food supply. 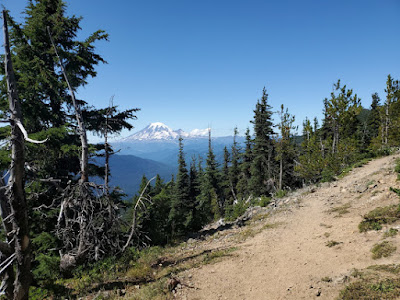 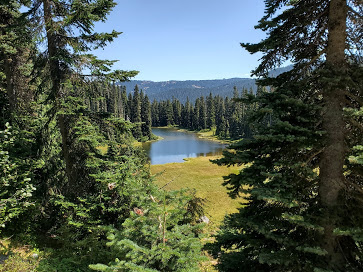 I have also been hiking with a great kid now and then. Jacob is 16 yrs old and is hiking the Washington PCT.  He is ultra-light which means he sleeps wet, miserable and hungry. If you read all these ultra-light hiking forums, and drink the kool-aid, you too can sleep wet cold and hungry. His mom and grandpa met up with him at Stevens Pass. After visiting awhile, they invited me down the mountain to have lunch with them. Bad timing, I had just stuffed my face. Besides I have miles to go before I sleep. 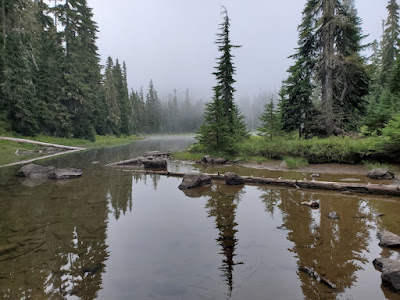 I ran into a kid from Alberta this morning as I was sitting in the trail eating breakfast. When he was passing by I said, "Keep Smilin". He said, "I've heard of you! You're the keep smilin' guy and all this time I thought you were super hero UMBRELLA MAN.

Posted by THE RAMBLING NEWS at 12:11 PM 4 comments: Links to this post