HE'S AT IT AGAIN!

As many of you know, Dick is back on the Pacific Crest Trail. He flew to Bakersfield, CA mid-June and took a shuttle to the town of Lake Isabella where he picked up his cooking fuel, shipped ahead of time to the post office (not allowed on the plane). He slept behind a church and caught the 5:30 a.m. shuttle to Walker Pass and began hiking north. He hiked in triple digit temps the first three days to Kennedy Meadows, the gateway to the Sierra Mtns. Fortunately, it's cooled down to 80s and 90s in the mountains.

For this trip I convinced Dick to purchase a satellite communicator. This was a very good investment. Out of his first 12 days on the trail, he only had a phone connection twice (he has Verizon. He noticed the hikers with ATT were talking on their phones). His first call was from the top of Mt. Whitney and the second when he made it to Red's Meadow Camp near the town of Mammoth Lakes. It eases my mind to receive his pre-set messages via satellite morning, mid-day and evening, and what's really fun is that I also get a map of where he is.


By the time he reached Mammoth Lakes (where he took a "NERO" to regroup) he'd hiked approx 255 miles out of the 6 or 700 he plans to hike on this trip. A total of 905 miles since the border of Mexico. There has been a lot of snow at Muir, Forester and Mather Passes and he ONLY fell twice. On one fall he tore his hiking pants, and on another he lost his favorite knife that he's had for nearly 40 years, plus both water bottles came out of their holders and slid down to no-man's land. He also broke a piece of camera equipment. He sent one message to me through the satellite communicator that read, "Send spare pair of hiking pants to Mammoth Lakes. Ripped the ass out of these and they are sewn together with dental floss."  See - I knew that thing would come in handy.


When Dick finally got a phone connection, he told me all of his woes about falling and losing things and the heat and mosquitoes and another small leak in his sleeping pad etc...  I made the comment that I thought he sounded discouraged and wasn't enjoying the hike. He quickly pepped up and said, "Oh no, it is fantastic. It is so beautiful out here and especially on the John Muir trail and I'm loving it."
I coordinated a meetup with a friend (above) we met in 1981 while working in Alaska. When I saw on Facebook he was hiking the John Muir Trail and heading south in the same area at the same time Dick was heading north, I messaged George and sent him a picture of Dick and told him to watch for a bearded 68 year old (not many out there that fits that description). George told me to tell Dick what to look for. Dick would have normally stayed on the Pacific Crest Trail but took the John Muir Trail cutoff so they could meet up. George sent the above photo and said, "Surprise, surprise, at 7 pm, who comes strolling in and finds us. What a fun hour we had with him, regaling us with all of his adventures! Truly a wonderful cap to our fun day!"

People ask me all the time if he is hiking alone. Yes, most of the time, but there are so many people on the trail. He passes at least a dozen a day. There is estimated to be over 3,000+ on the trail this year. Not all will make it to the end. 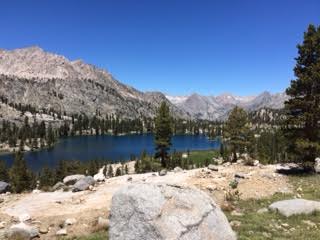 He is now at Tuolumne Meadows in Yosemite National Park. The only reason I know this for sure is I see food purchases coming through on our credit card. To be continued...
Posted by THE RAMBLING NEWS at 1:14 PM 11 comments: Links to this post