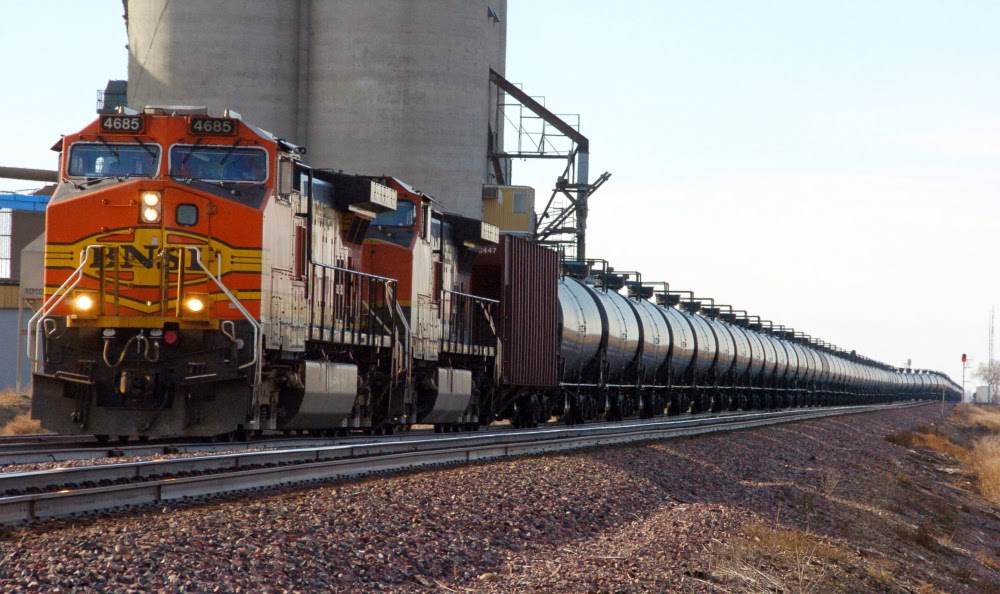 As we traveled across Hwy 2 through North Dakota, Montana, Idaho and now Washington, a common sight and sound are trains transporting millions of barrels a day of crude oil from the Bakken oil fields of North Dakota and Eastern Montana. Black oil tankers, one after another, stretching as far as the eye can see. Many of the towns these trains travel through are not happy with the frequency of trains passing through which brings more noise and traffic jams but most of all concerns about the danger of a possible derailment. 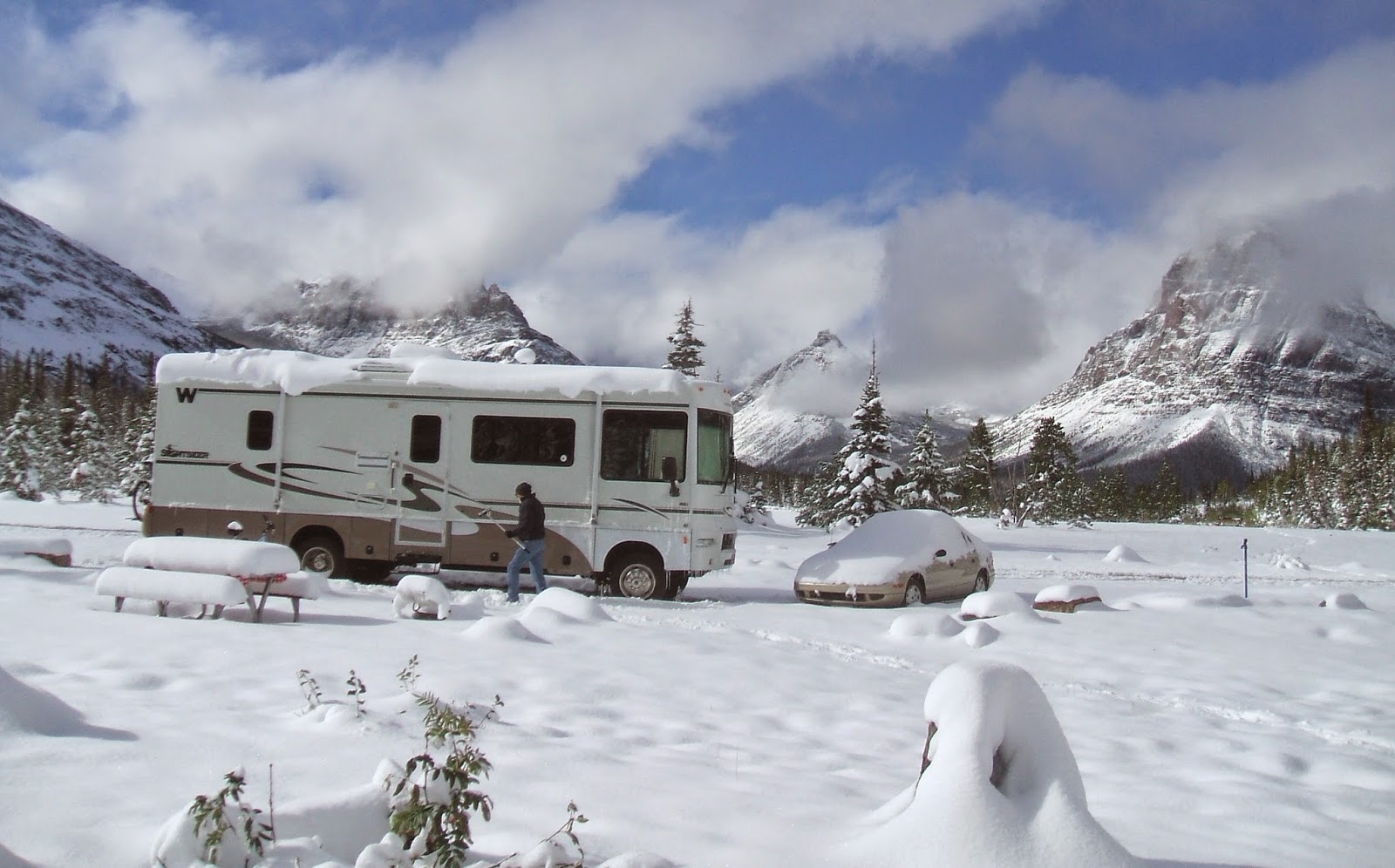 We left Michigan just in time to miss the rains of early September and made it to Glacier National Park in time to enjoy a beautiful early fall snowstorm which lasted three days. We were fine with being holed up knowing that the temps would return to the 70's shortly. 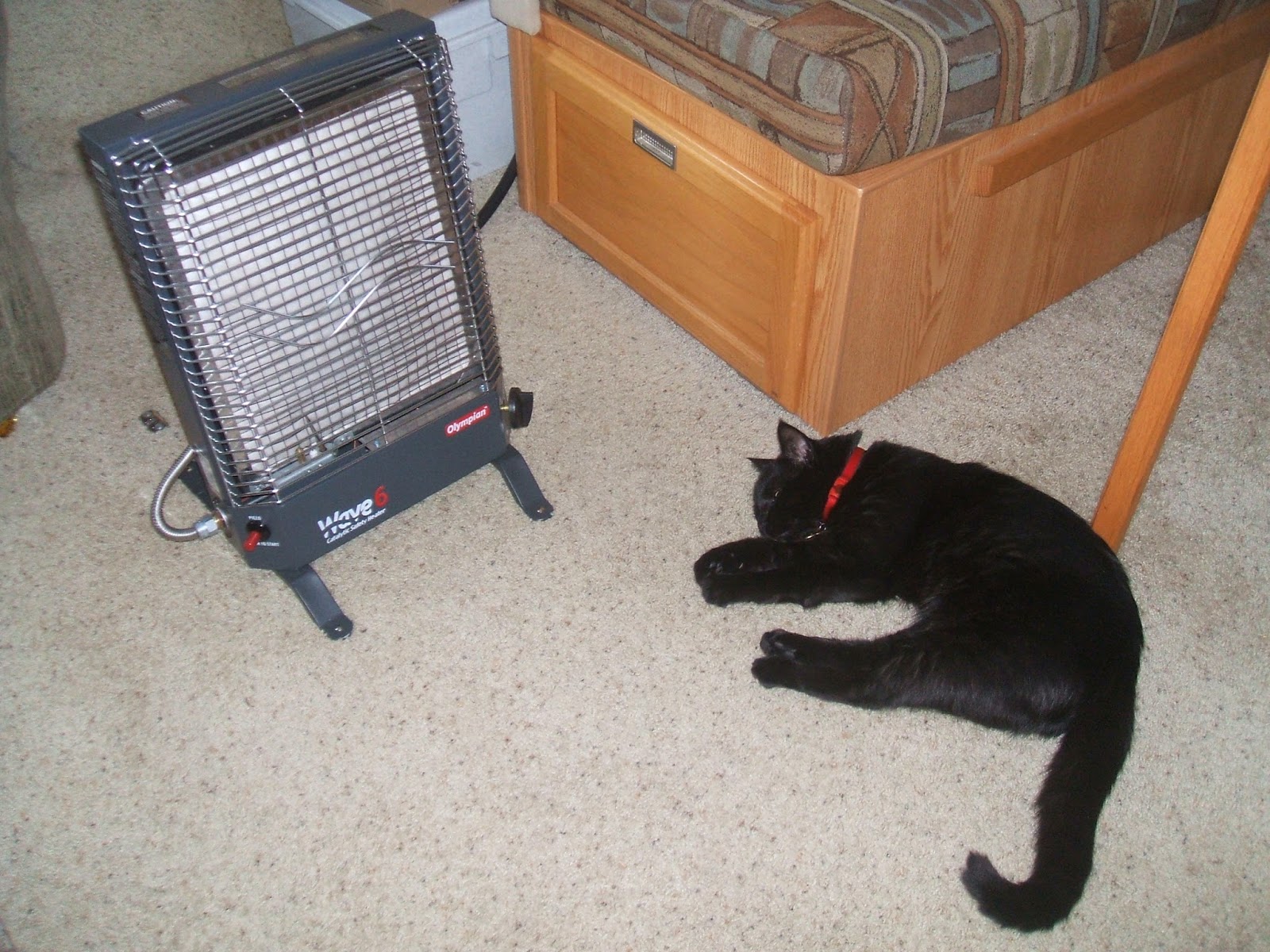 While we were home this summer, my "handyman" (I used to go for "handsome" - now I go for "handy.") installed a quick release WAVE portable heater. We were thankful for the steady warmth it gave us. We had it on day and night during the below freezing weather - for just pennies an hour. 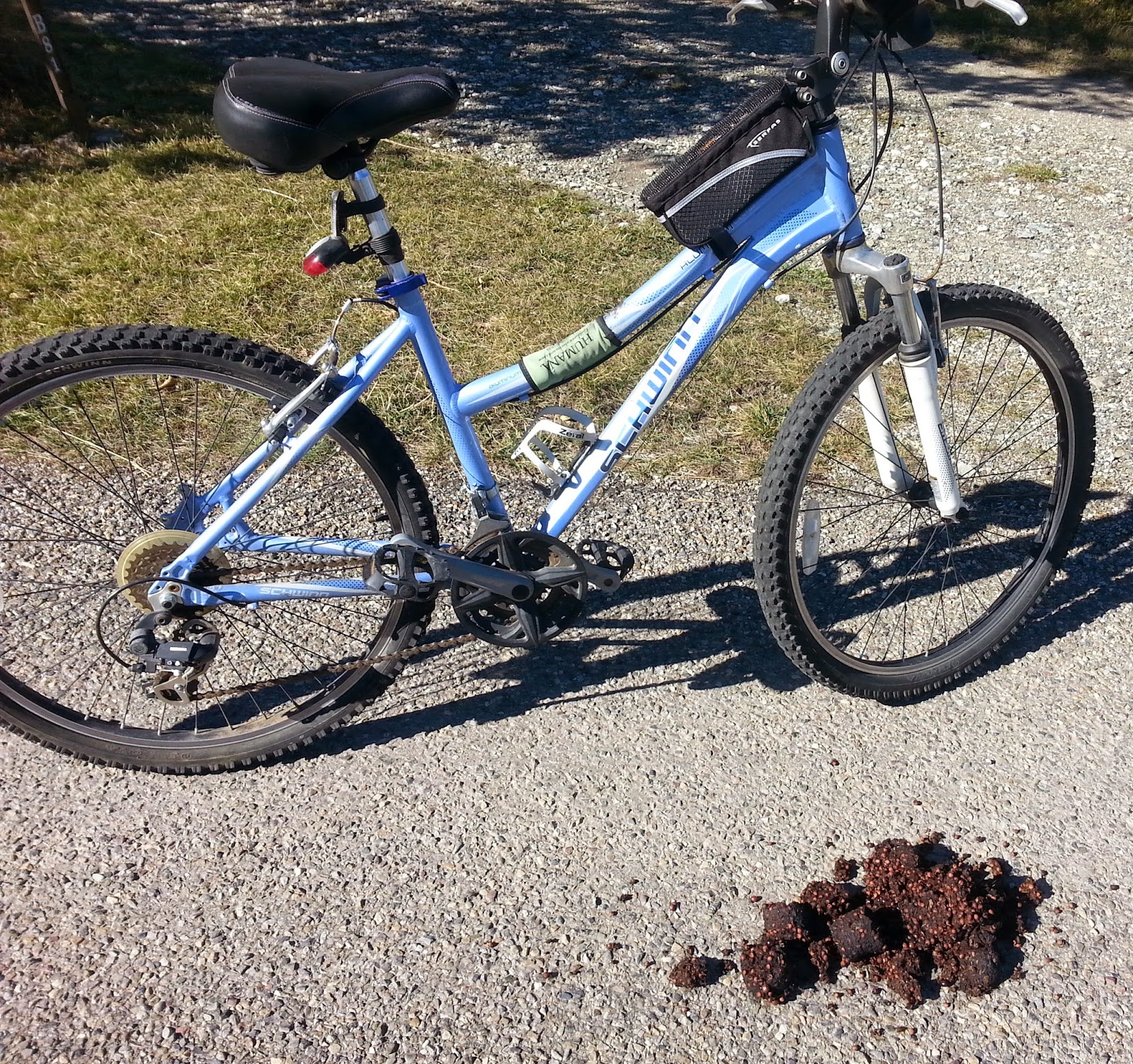 We moved up to St. Mary's Campground and set up a base camp while Dick went on a 4 day backpacking trip. I was warned of the bears frequenting the campground eating berries to help them fatten up for hibernation. I decided to take a bike ride and check out the campground. I was riding up Loop B which was closed to camping for the season. I couldn't believe my eyes when I came upon the biggest pile of bear scat I'd ever seen. I was nervous but decided I'd take my chances of being attacked because I just had to get a picture. As I rode the rest of the Loop I loudly announced "Hey Bear!" from that point on. 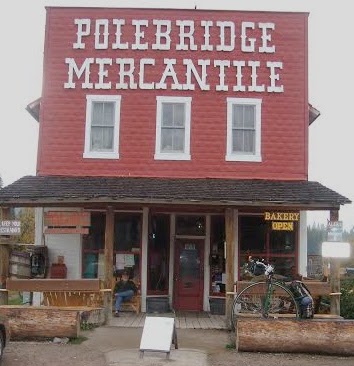 Of course, we had to make our yearly run to the Polebridge bakery for a bear claw. Dick is sitting on the front porch.  While enjoying our coffee and pastry a young man rode up on the bicycle you see on the right in the picture. It's called a penny-farthing. We were amazed to hear he was riding around the world on this thing. Click here to read about it: PENNY-FARTHING WORLD TOUR

We kept hearing about Huckleberry pie and the best place was the Park Cafe. Since we were camped just down the road I decided to go buy us a couple pieces while Dick made a pot of coffee. As I sat down at the counter, the waiter asked if I needed a menu and I said, "No, I'd like two pieces of Huckleberry pie to go." He returned with two small pieces and said, "That will be $17.00".  I just about fell off my stool. I couldn't believe it! In total shock I asked, "How much for a WHOLE pie?"
He said, "$40.00".  I had a dilemma - if I went back to the motorhome with no pie, Dick would not be a happy camper so I bit my tongue and paid -- And I thought Traverse City pies were expensive!?


While we were camped on the east side of the park we connected with our nephew, Kevin, and his friend, Shannan, who live in Whitefish.
After two weeks at Glacier we headed west on Hwy 2. A year ago, while at Glacier we met a couple who wanted to go on a long day hike but didn't want to leave their dog in their RV all day. We needed a "dog fix" so we offered to dog sit. We watched the dog twice for them. Nancy told us if we ever went through Sandpoint, Idaho we could park at her place. We took her up on the offer and stayed two days.

One of the interesting places we visited was in the middle of nowhere - The Bird Aviation Museum and Invention Center in Sagle.  Nancy is a docent there and took us on a private tour. The museum was built in honor of Forrest M. Bird. He is best known for creating some of the first reliable mechanical ventilators for acute and chronic cardiopulmonary care. If you worked in the medical field you may have heard of the Bird Respirator. There is even a runway on the grounds so you can fly in to visit the museum. Another interesting invention happening in this little town of Sagle, Idaho is the SOLAR ROADWAY.

Last, but not least, we traveled on to look up a friend we hadn't seen in nearly twenty years. He and his family live in WA. near Lake Roosevelt National Recreation Area  where his wife, Denise, works. We met Ken when we went to South Manitou Island (Sleeping Bear National Lakeshore near our home) in around 1990. He was a park ranger there and saw us struggling to start a fire on a windy/rainy day and invited us out of the weather to use his stove. He visited us several times before moving on to other NPS positions in other states. We've stayed in touch through the years. His nickname is "Tree" which I'm sure needs no explanation.

Posted by THE RAMBLING NEWS at 4:54 PM 3 comments: Links to this post


We are now back on the road again after a busy couple of months of yard work, house repairs, filling in at a couple jobs and visiting with friends and family. Since we were only home for a short time we never moved out of the motorhome and used our house as our guest house. It worked out great for friends visiting from PA. and another from Germany. We love our beautiful 6 acres with the stream flowing through but we know when we return next spring things will be so much different. A shopping mall is going in at the end of our little rural road and then our road will be widened 11 ft on our side with a new culvert going in where the stream crosses the road. As they say, "That's Progress."

Our favorite route from our house is along beautiful Lake Michigan, over the spectacular Mackinaw bridge and the straits of Mackinaw and then west across the U.P.  We are again taking Hwy 2 all the way to Glacier National Park in Montana. This is a beautiful relaxing route through little "Yooper" towns. Dick and I both agree how beautiful Michigan is with its lush green forests, many rivers and lakes and spectacular views. We have traveled all across the U.S. and are happy that this is our home. 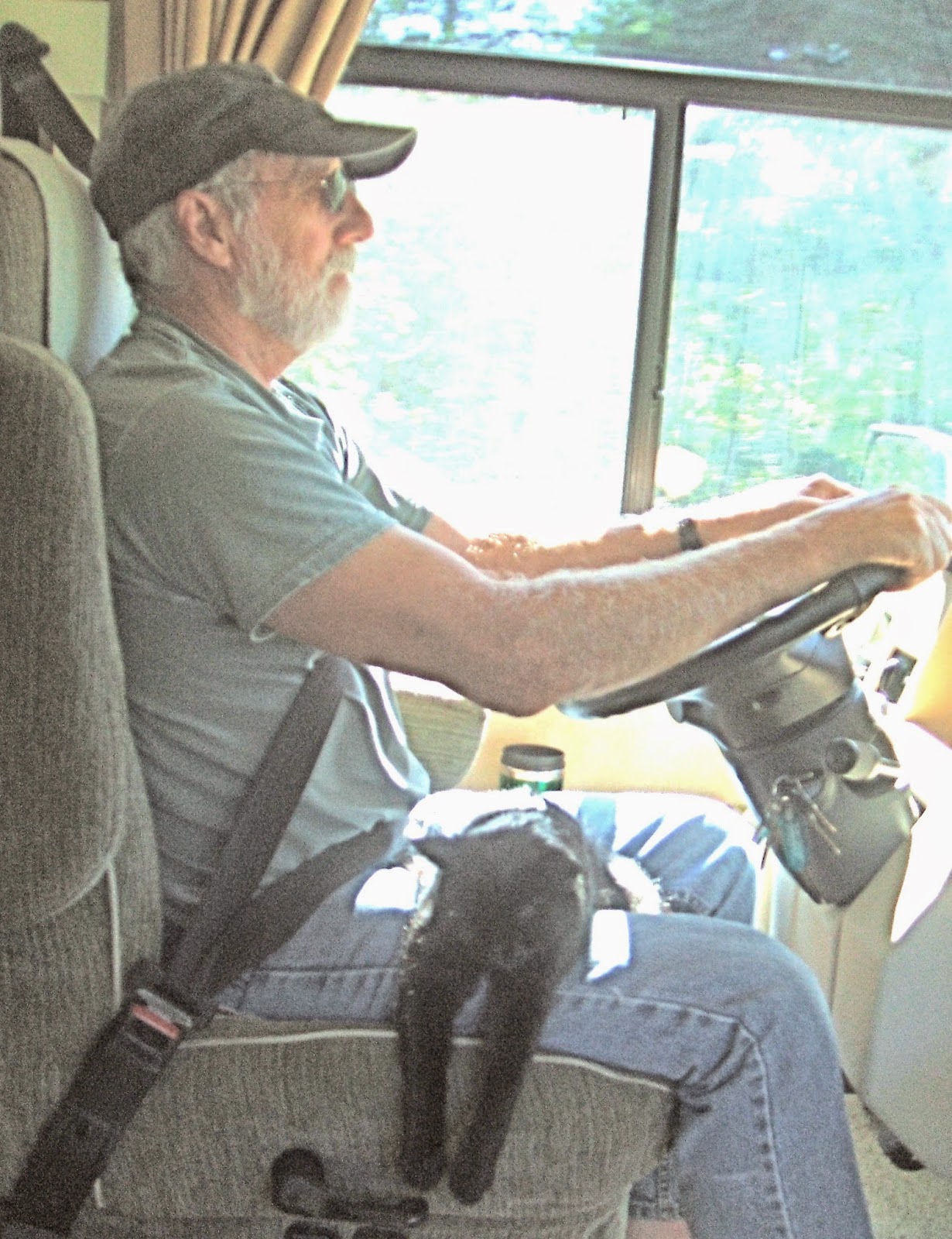 After the second day on the road, Boo is finally getting used to traveling again, but still feels most secure on one of our laps. 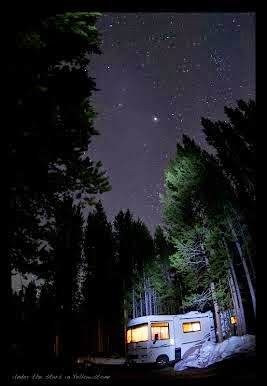 This past spring while we were in Yellowstone our friend Bob Howell visited us one evening. He was in the park doing night photography and took this photo of our motorhome when he left and surprised us with it. Wanted to share because it's so amazing.

FUNNY THINGS WE SAW SO FAR ON THIS TRIP:

This huge billboard along I-35 in Duluth.  Couldn't believe it!!!

Posted by THE RAMBLING NEWS at 1:31 PM 3 comments: Links to this post