SUNSHINE ON MY SHOULDER

After six days on the road we are now on the back roads of Alabama (much more interesting than the freeways), and within 100 miles of the Florida beaches. Yes, we take our time. Along the way we stopped in Nashville, TN to see the Rockettes Christmas Show. A friend of ours is their Assistant Company Manager. What an amazing production. I kept saying, “Wow” whenever I watched those girls dance in their beautiful outfits and perfectly sinchronized. The town was decorated for the holidays with thousands of twinkling lights and decorations. We walked around downtown among the many street musicians and honky tonks and had dinner next to the Ryman Auditorium, home of the Grand Ole’ Opry. Driving the “spaghetti” of roads, as Dick called them, and listening to him swearing, we were only lost once. When we were trying to get out of town in our 29’ motorhome, he took a wrong turn and ended up in the airport parking lot. It was a very tight and scary squeeze getting through two gates for “small vehicles” only (adversity makes for good stories). We try to avoid big cities, but Nashville was fun and it’s put me in the Christmas spirit but we’re looking forward to being where it’s warm, quiet and natural. Funny Face too!
FYI for you RVers/Travelers:
1. In some states, with certain Walmart cards you can get another 10 or 15 cents off per gallon at Murphy or Walmart stations.
2. If you purchase or renew a Camping World President’s Club membership for $25, you get a voucher for $25 off at a participating Good Sam commercial campground.
3. If you’re traveling through Nashville and want a neat experience during the holiday season, camp at Jellystone Campground along I-65. There is a spectacular Christmas light show in the woods around the campground. 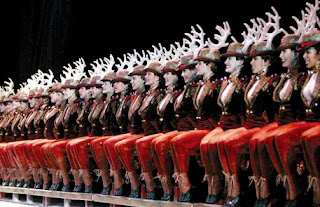 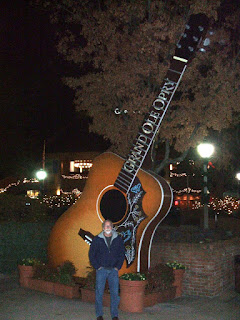 Brrrrrr!! We’re in Bowling Green, KY at the Camping World (free camping) and woke up to a beautiful orange sunrise and frost covering everything. Thank goodness for our goose down comforter. We’re taking our time heading south, staying on the super slab which I don’t enjoy but driving through Louisville was interesting to see banners hanging from buildings commemorating the famous people who were either born/raised or lived a significant period of time there. When we are making time and stay along the expressway either at Walmart or places like this, it usually means noise and lots of light. I wear my ear plugs and a face mask and sleep like a baby. We are amazed at how much truck traffic there is on I-65, and I-75 is the same. The economy must not be too bad. Wish we could go back to train transport. Just makes more sense.
I remember January 1978, we were in our 20‘s and on our first trip with an RV. We waited patiently for a break in the storm when we could get out of Traverse City and head for Florida. We headed for I-75 and drove until dark to hopefully get out of the bad weather. We took the Corbin, KY exit planning to camp somewhere. The road we turned on was a sheet of ice and the trailer started to pass us on the left. Dick remembered his grandfather told him if he ever lost control of the trailer to not hit the car brake but pull the trailer brake. It did the job and straightened it out and we pulled off to the side. Immediately a couple of good ole boys pulled up in a tow truck (we figured they’d been waiting for suckers like us) and said “You’all call a wrecker?” They hooked onto the front of our car and trailer and pulled us to the local gas station where we spent the night. After a sleepless night, we decided to treat ourselves to breakfast at the Cracker Barrell restaurant and the waitress asked Dick if he wanted Rooster eggs or hen eggs. He looked at her with a blank stare and I said, “Try the rooster eggs, they’re bigger.” So he ordered the rooster eggs. The waitress replied, “Don’t ya’ll know that Roosters don’t lay eggs?” 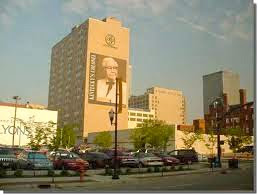 ON THE ROAD AGAIN

After a full day of loading the motorhome and cleaning and then winterizing the house, we slept in the motorhome to be ready to leave at first light. With one last look around the Ole’ E Ranch, to make sure we had everything, we sat in our driver and copilot seats and just as Dick turned over the ignition it all of a sudden came to mind, “Did we call to have the insurance put on the motorhome?” “OH NO, it’s Sunday, now what?” We called the main office but no help there. We emailed our agent through his website and after waiting an hour we decided to wait instead at our favorite breakfast place downtown. If we couldn’t leave by 11:30 a.m. then we’d go to PLAN B and leave Monday morning. Fortunately, our agent has an iphone and received his email (either at church or hunting) and gave us the go ahead. The roads were still icy in spots and on the expressway there were a couple of cars flipped in the median, so as I always say, there was a reason we were held up for a few more hours. When we drive this route down 131 through Niles and into Indiana there is a stretch of farmland where many farmers raise pigs. It always reminds me of the years when Maggie was a child and we’d travel through this area to visit my parents. One such trip as we traveled by the pig farms, Maggie was probably two at the time, she says, “I Mell pigs!” So, of course, we have used that line many times when we smell anything foul. We had an appointment at 8 a.m. in Elkhart to get one hydraulic leveler fixed. It had a small, slow leak. I always knew when it started to get low because whatever I was cooking on the stove would flow to one side. Our destination is Florida and who knows from there. To be continued......
Posted by THE RAMBLING NEWS at 8:27 AM 4 comments: Links to this post