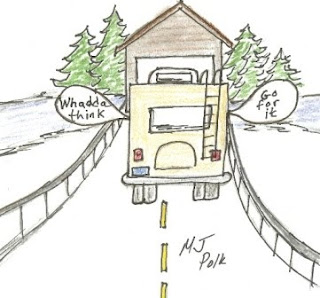 LOST PART II
Well, Gaila has done it again. She is such a bad influence on me. We were headed home to Michigan and almost made it out of New Mexico. I mean, we were so close to Oklahoma we could have spit on an Okie and hit two Texans. I just casually mentioned we should turn around and head back across New Mexico and Northern Arizona, then go home by way of Nevada, then California, then up the Oregon and Washington coast and over to Montana. Most women would be more responsible and say, “No, we are going home.” Not Gaila. She said, “Okay!” She is sooooo bad!
It’s not such a crazy idea when you think about it. We are already all the way out here. We could hike in the Grand Canyon, Zion and maybe even parts of Yosemite National Parks. You can’t do that in Michigan. We weighed all the options. Go home and mow the yard or stay out here and hike the Zion Narrows. It was a tough decision but we are tonight camped at Eagle Nest, New Mexico just outside of Taos and headed west again. Another thing that this extended trip will prove is just how accurate the Discover Channel is. I watched that program where they pretend Man is wiped off the planet and nature takes over. They show buildings being eaten by vines and crumbling to ruins. I’m just curious if that will really happen if I don’t mow my lawn for the next seven years. Just kidding. That’s how long we were gone the last time Gaila started this irresponsible behavior. I’m almost sure it won’t get that bad again.
When you get to be my age you start looking into your bucket list. There are things I have never done yet and this might be the time to do some of them. Also, my wife says I have to have a job before I retire. So I have applied for one. I decided if I was going to be crazy wild, and get a job, I should get a Government Job. They never run out of money as long as they have ink. So I applied to North Cascades National Park as a backcountry ranger. A recent communication from them said I was at the top of the list of qualified applicants. It was kind of a “no-brainer” decision. They want to pay me $21,000.00 to backpack for six months. If it looks like they might give the job to someone else I might have to tell them I will do it for half price. I hope it doesn’t come down to that. With a 20 zillion trillion budget deficit, who’s going to miss a measly twenty-one grand that’s going to a good cause like backpacking. If it doesn’t happen, no big deal. If I die and never have a job, history will show that at least I tried.
If we do hear from North Cascades we will have to put our foot in the carburetor and head up there. If we do not hear from them, we plan to visit a lot of places we love and places we have never been.  It will give us a chance to spend some more time with Gaila’s family in Arizona and California and Maggie in Washington. We haven’t told the two cats yet. They may mutiny. There are many pluses to this decision. One is that most people have done the responsible thing and gone home to mow. That has left all the great camping places empty and quiet. I think it might even be safe to head back into Arizona next week.
The toughest part for Gaila was having to give up her On-Call position at Urgent Care. They were kind enough to put it on hold for her this winter. After she hung up, I don’t know if she was crying because she was happy or sad. I don’t ask too many questions when she gets emotional. I find If I hike about five miles it cures her.
We put hours of thought into this decision. We made a list of reasons to stay out west and reasons to go home. The “stay list” just kept getting longer. Lists are a lot like casino odds, they can be fixed. So maybe we left a few things off the “go home list” but it’s not like we are never going home again. I think who ever said, “You can never go home again” was wrong. We intend to prove it, but not right away.   --Keep Smilin’ Dick   Carpe Diem!
“ Looking back your greatest regrets will be of things you didn’t do not the things you did do.”
Posted by packtoter at 5:53 AM 3 comments: Links to this post

FART IN A WHIRLWIND!