It's been over a month since I last blogged. We've done so much since leaving my family in California. After nearly three weeks parked in my sister's yard, our motorhome needed to find a RV dump station. It costs money to dump in California and Dick doesn't like to pay to get rid of his s---!  We decided to head for Frog City Fairgrounds in the town of Angel's Camp to get full-hookups. We drove the historic Hwy 49 most of the way, traveling back in time as we drove through the Mother Lode mining towns. Gold rush history can be found everywhere. There were some narrow, steep and winding curves along part of the route. I was on the side looking down over the edge and there were no guardrails!! I'd brace myself against the window. Like that would help any! 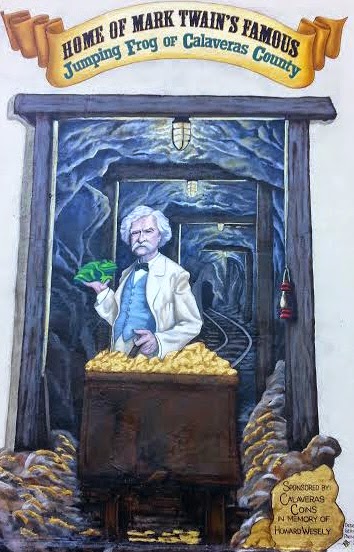 "The Celebrated Jumping Frog of Calaveras County" is an 1865 short story by Samuel Clemens, his first great success as a writer, bringing him national attention. So the town of Angel's Camp now has an annual frog jumping contest. (What people do for entertainment). 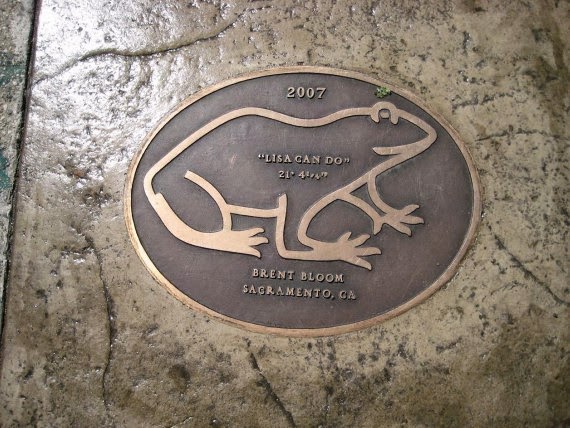 Huge bronze plaques are embedded in the sidewalk throughout the town. Some frogs recorded to have jumped 20 feet!  We couldn't believe it. Then we found out it's totaled by combining three jumps. Duh!! 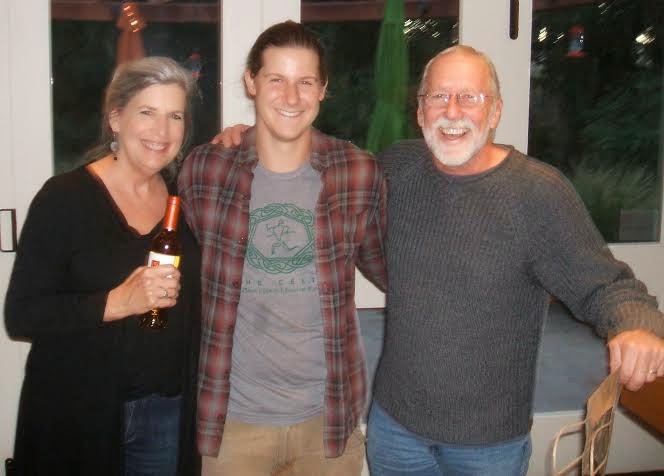 We were on our way to visit Max Bruening, the son of good friends from home. He grew up with Maggie. He is learning the wine business and now working at different wineries around the world in all aspects of production. This season he's been at the Halter Ranch Vineyards in Paso Robles, CA. 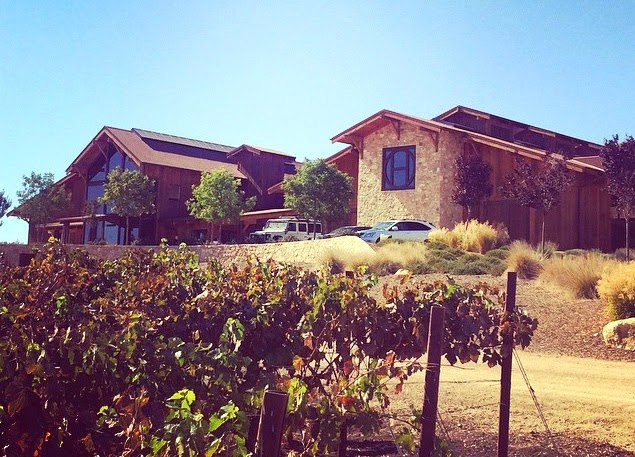 After a bit of wine tasting Max gave us a tour. Next he's off to New Zeeland to work at a winery there for a season.

While in the area we stayed at Cerro Altos Campground in the Los Padres National Forest. We planned on being there awhile and didn't want to pay the high prices of a commercial campground on the coast. The low price of $9/night sounded good to us. It was a bit precarious getting up into the campground (a narrow, winding road and fortunately we only met up with one other vehicle) but our camping spot was perfect and only about 6 miles to the coast at Morro Bay. We get spoiled when we're in these quiet and dark campgrounds. It's tough adapting to a noisy one.  That's the nice thing about living on wheels. If we don't like the noise or bad weather we just move on. 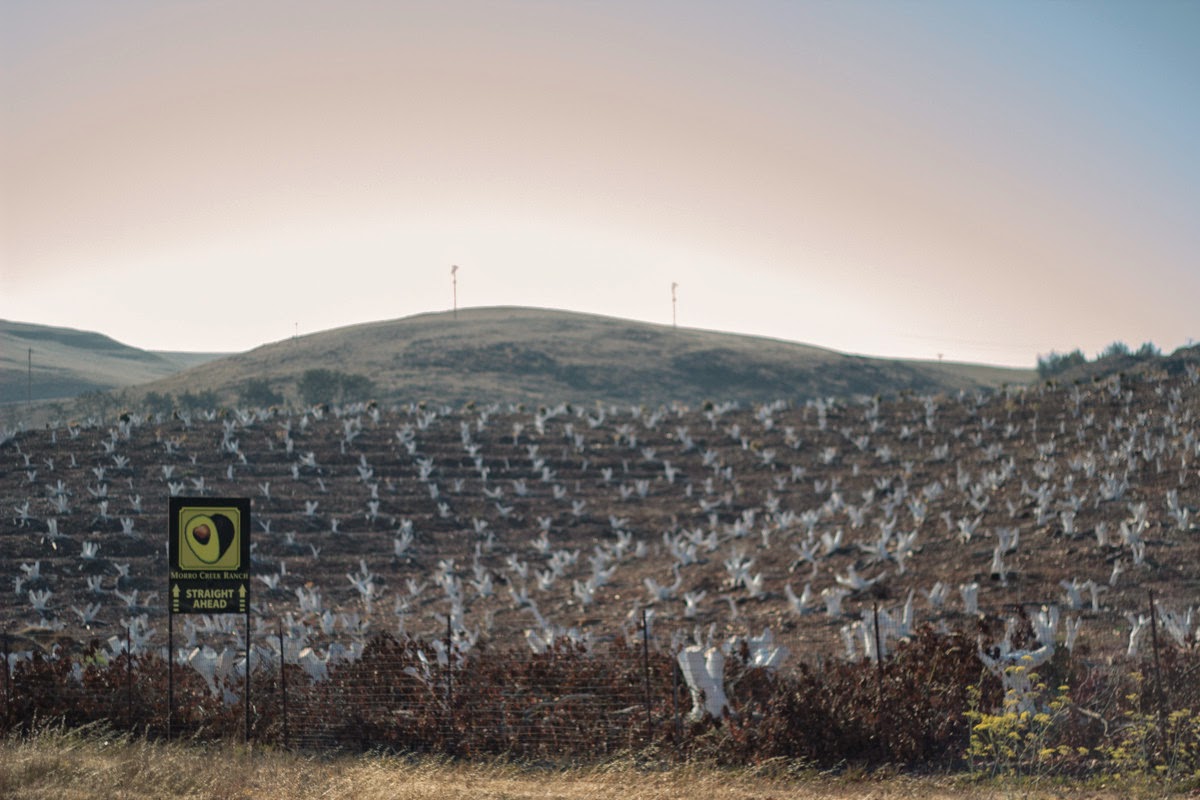 On the road to Morro Bay we saw hundreds of avocado trees that were "stumped" to conserve water. They will grow back in a few years. We drove through so many areas in California that were suffering because of the drought. The demand for water has increased substantially because of population and an ever growing agricultural economy. California supplies nearly half of all US fruits, veggies and nuts.

We've traveled other parts of Hwy 1 along the northern California coast and I've always wanted to travel some of the southern parts of this Hwy.  After seeing pictures of the road cut into sides of mountains, Dick said he would never drive the motorhome along certain areas so we drove the 125 miles from Morro Bay up to Monterey in our Saturn. We began with a tour of  the Hearst Castle, then from there down to the sea to view the elephant seals at the rookery.


Here is a connection to a LIVE CAM that I check every now and then. It seems most of the time they are lazy but now and then you'll see a few males sparring. 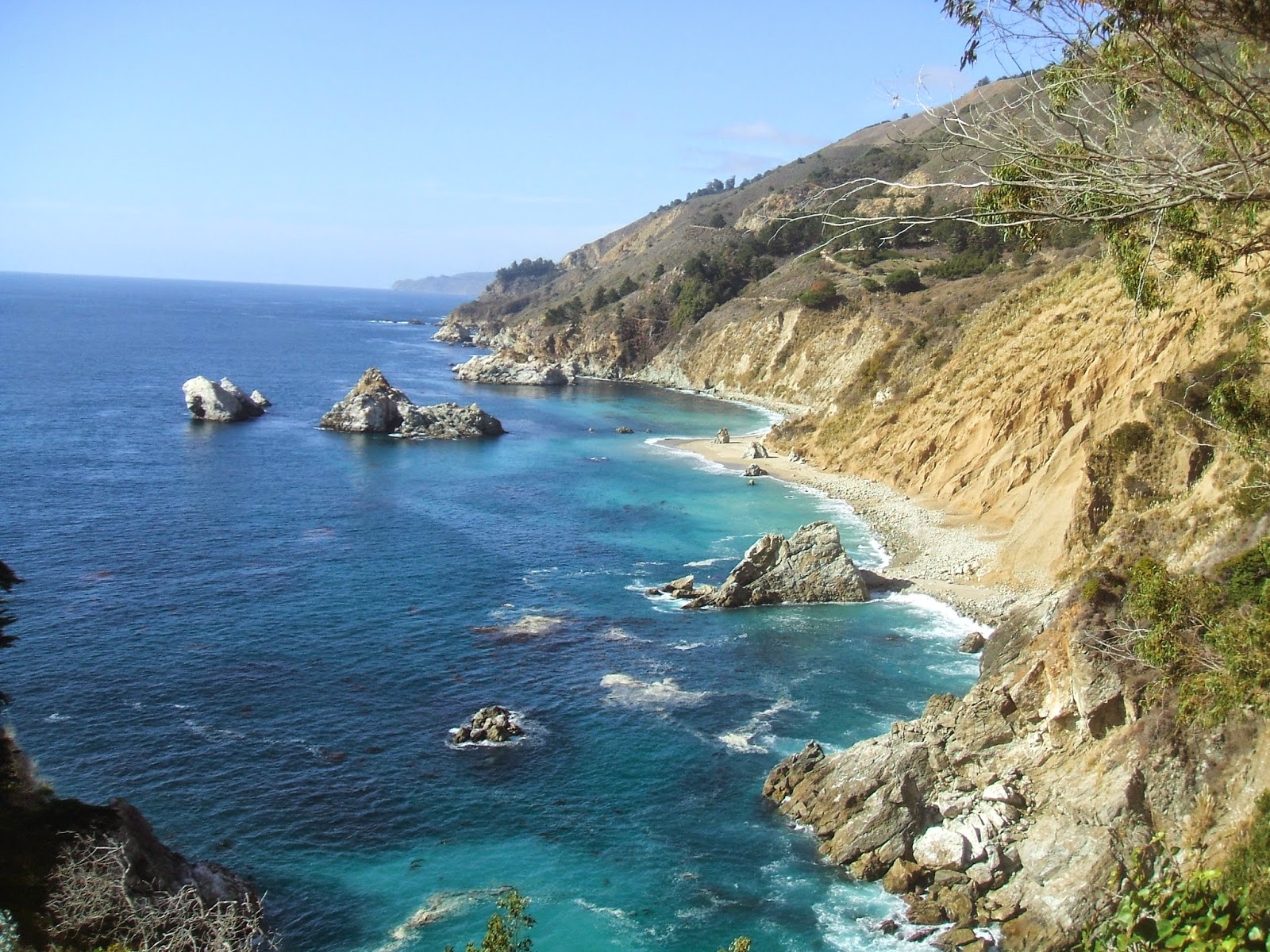 Spectacular views around every curve.  After driving this portion of Hwy 1, Dick says, "No Problem driving our motorhome along here." We found a couple beautiful campgrounds we hope to stay in someday. 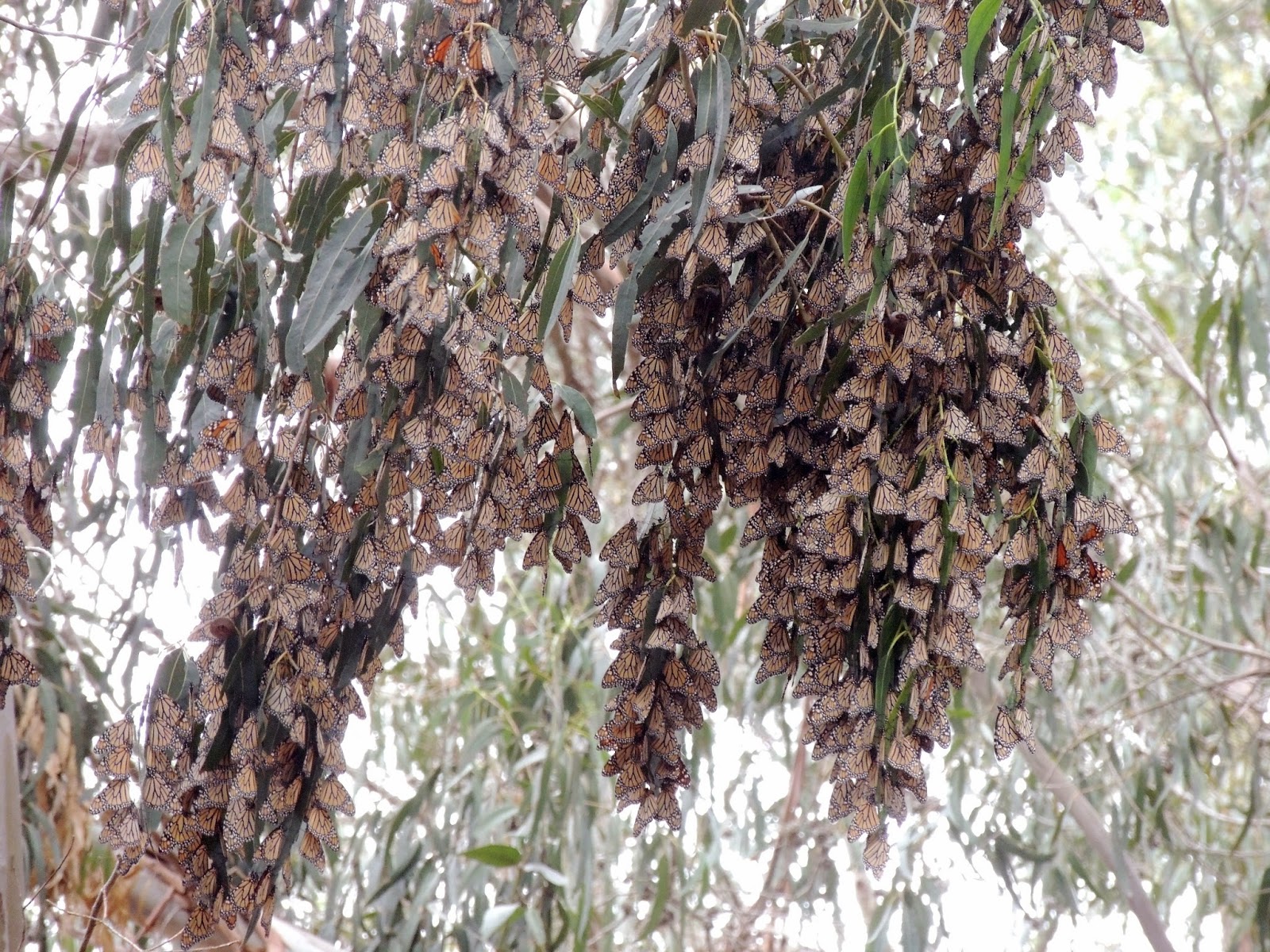 We were along the coast at the time of year the Monarchs are at Pismo Beach are also seeking shelter from the northern winters.  What a site to see these clusters of butterflies draped in the trees. 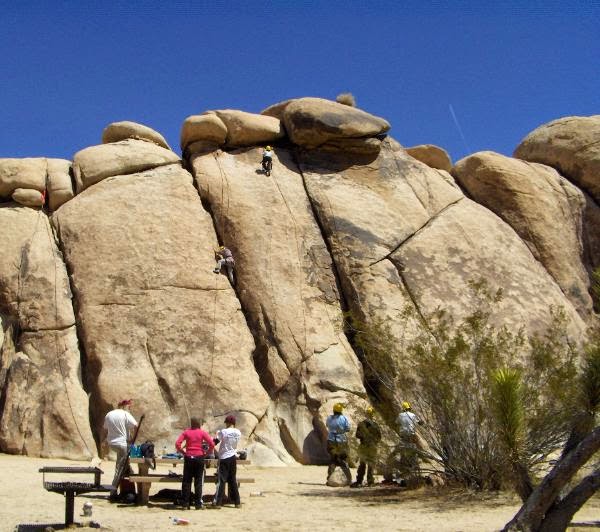 Traveling at this time of year is nice because many Snowbirds don't head south for the winter until after Thanksgiving or Christmas.  Campgrounds are less crowded - except when we reached Joshua Tree National Park. It was packed with people, even in the middle of the week. We came to the conclusion that it was mostly Californians and has become a climber's park. We had to squeeze in, but we were fortunate to get a camping space for a few days. We didn't have a phone or wifi connection in the park which is usually no problem, but Maggie was flying from Seattle to the Virgin Islands and we wanted to be within phone range at least. So we discovered just outside the south entrance of the park there were motorhomes parked on BLM land and we had a connection. A perfect spot for the night.

We saw on our map an area that looked interesting - The Salton Sea State Recreation Area. On our way south we were just going to drive past it and maybe stop for a picnic but when we saw how beautiful the water looked from the road with all the white and brown pelicans and so many other water birds, we decided to stay awhile. We were the only ones there besides the host and thought this was perfect. We got all set up and as we walked down to the water we were hit with the smell of dead fish. The beach is actually not sand but bleached fish bones, barnacles and shells, which is hard to walk on. Unfortunately, the sea's rising salinity is killing the fish and other sea life. It is 40 percent saltier than the ocean. It is an important winter stop for migratory birds. There are many groups and individuals working together to save the sea. At one time the Salton Sea was the California Riviera.  Now Hollywood uses parts of this area when they want to film an apocalyptic movie.

Traveling isn't always wonderful. It can get depressing too when we see the sad things that are happening around the country. All around this southern California area through the Imperial Valley we questioned if there's a shortage of water why are they growing hay down here? This Youtube video explains it all.  https://www.youtube.com/watch?v=F_lCQr42An8  It's also sad to see all the livestock yards. I get closer and closer to becoming a vegetarian the more I see miles of cattle cramed together, standing in their own muck in the heat. It's not just California that deals with environmental issues, it's global - ecological and environmental disasters. Dick says the problem is "we multiply our numbers and divide our resources."

So we packed up and headed into Arizona passing through the LTVA's (Long Term Visitor Areas) along I-8. Miles and miles of open dry desert areas. Many snowbirds migrate here for the winter. Sometimes the whole winter. We have never had the desire to do this. We have friends who keep inviting us to join their circle of RVs on the BLM around Quartsite. Who knows we just may have to try it once for a few days.
So on to a more uplifting area to camp and meet up with our good friend, Dave Monstrey, from home. He headed south before the blizzards began.  His wife, Kathy, will fly into Los Angeles and they'll be off to Australia for a few months. We met up at Painted Rock Petroglyphs BLM Campground just west of Gila Bend, AZ. Another quiet and dark campground and only $4/night. If it wasn't so dry, the Gila River would pass near here. All the creeks and rivers are dried up.


We decided to attempt to climb the mountain where we were told during WWII General Patton had a lookout where he would go everyday to watch over his men who were training in the desert. We could see the building at the top and thought why not. I should have known better to go with these two guys. Dave who does long-distance bike trips and Dick long-distance hiking. I ended up falling three times and came home with scratches, bruises and pierced by a few cactus.
We never did reach the shack at the top but Dave stayed an extra day and took a different route and did make it and discovered the way Patton reached it every day was a cabled inclined elevator.

We enjoyed our time together but we had made reservations at Picacho Peak State Park for Thanksgiving week so we moved on.  My parents drove to the park for turkey dinner. We have lots to be thankful for.  Now it's time to get into the Christmas spirit. I did see an RV with some icicle lights hanging from their awning and a wreath on the front. 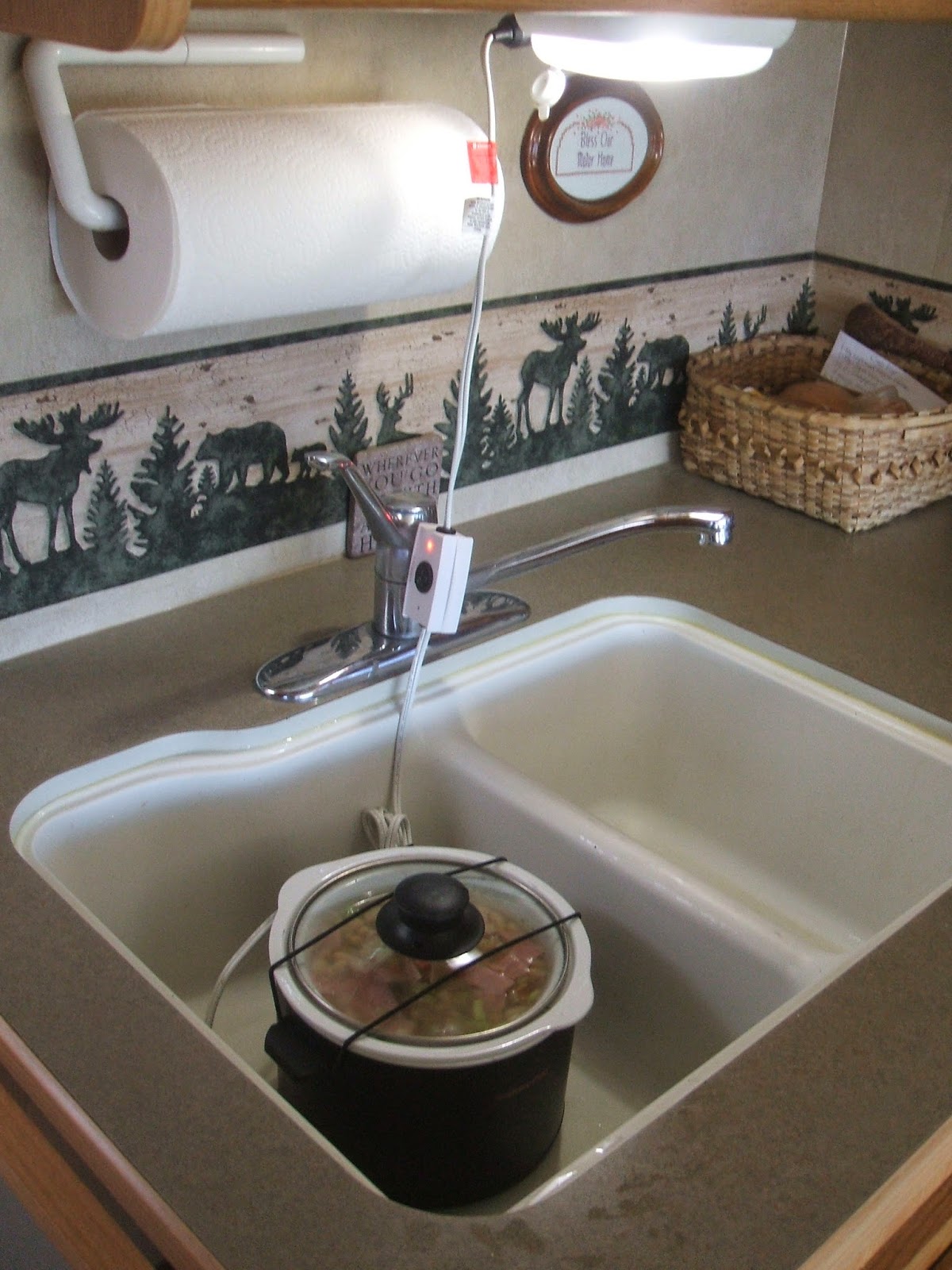 Our 12 volt Crockpot.  It works great. My "handy man"
installed a 12 volt socket behind the light above the sink.
We set the pot in the sink as we travel down the road. 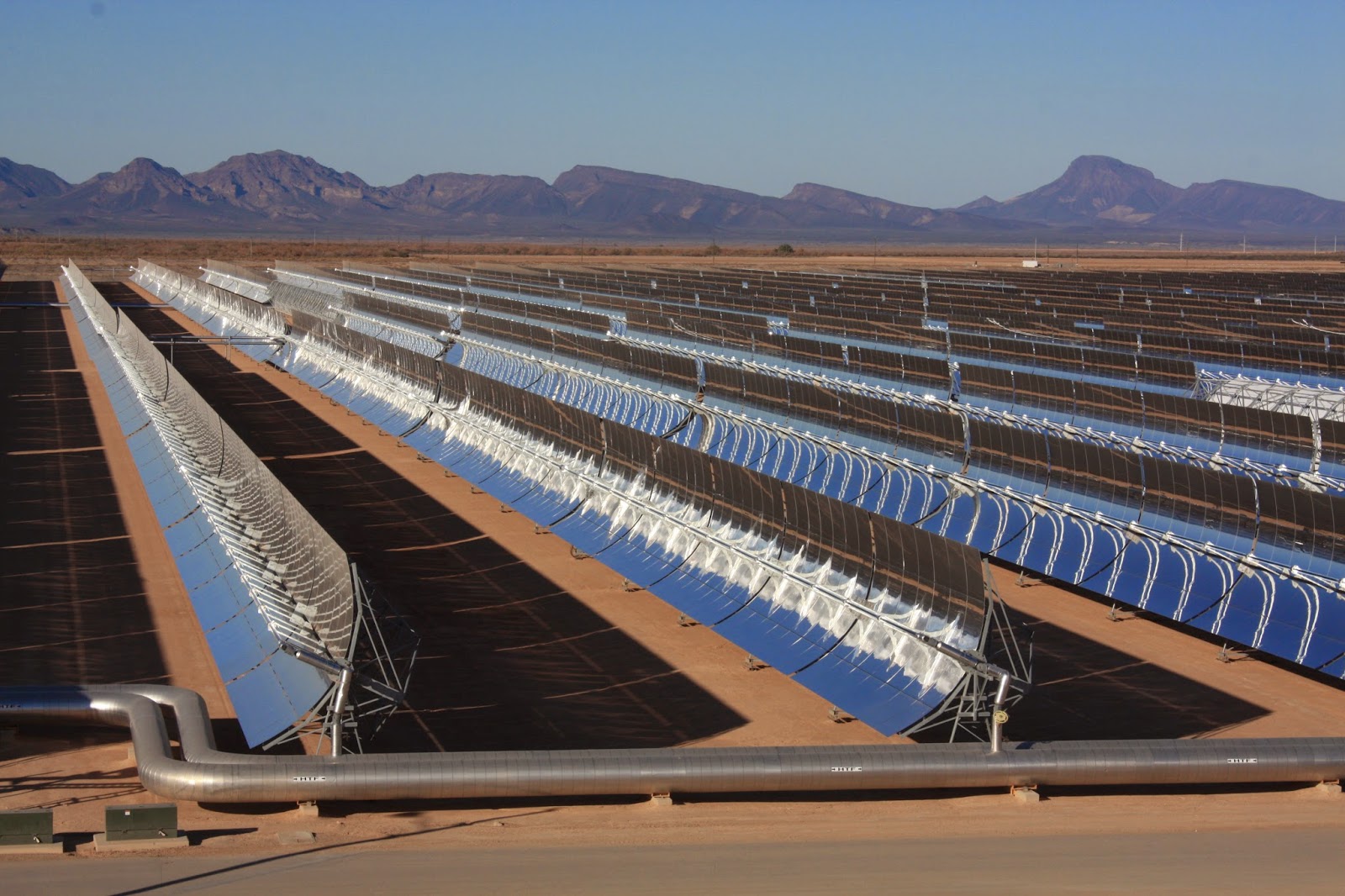 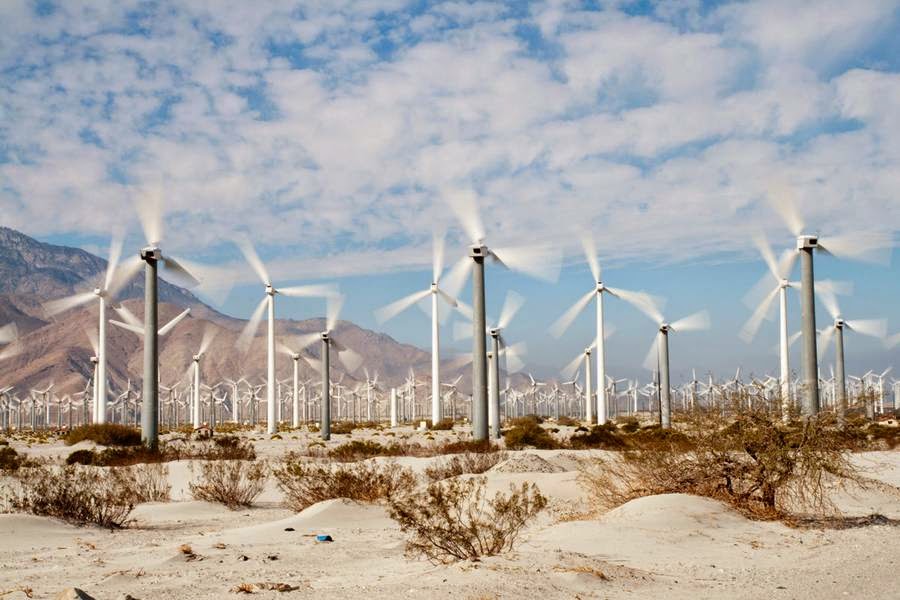 There were miles of windmills around Mojave, CA 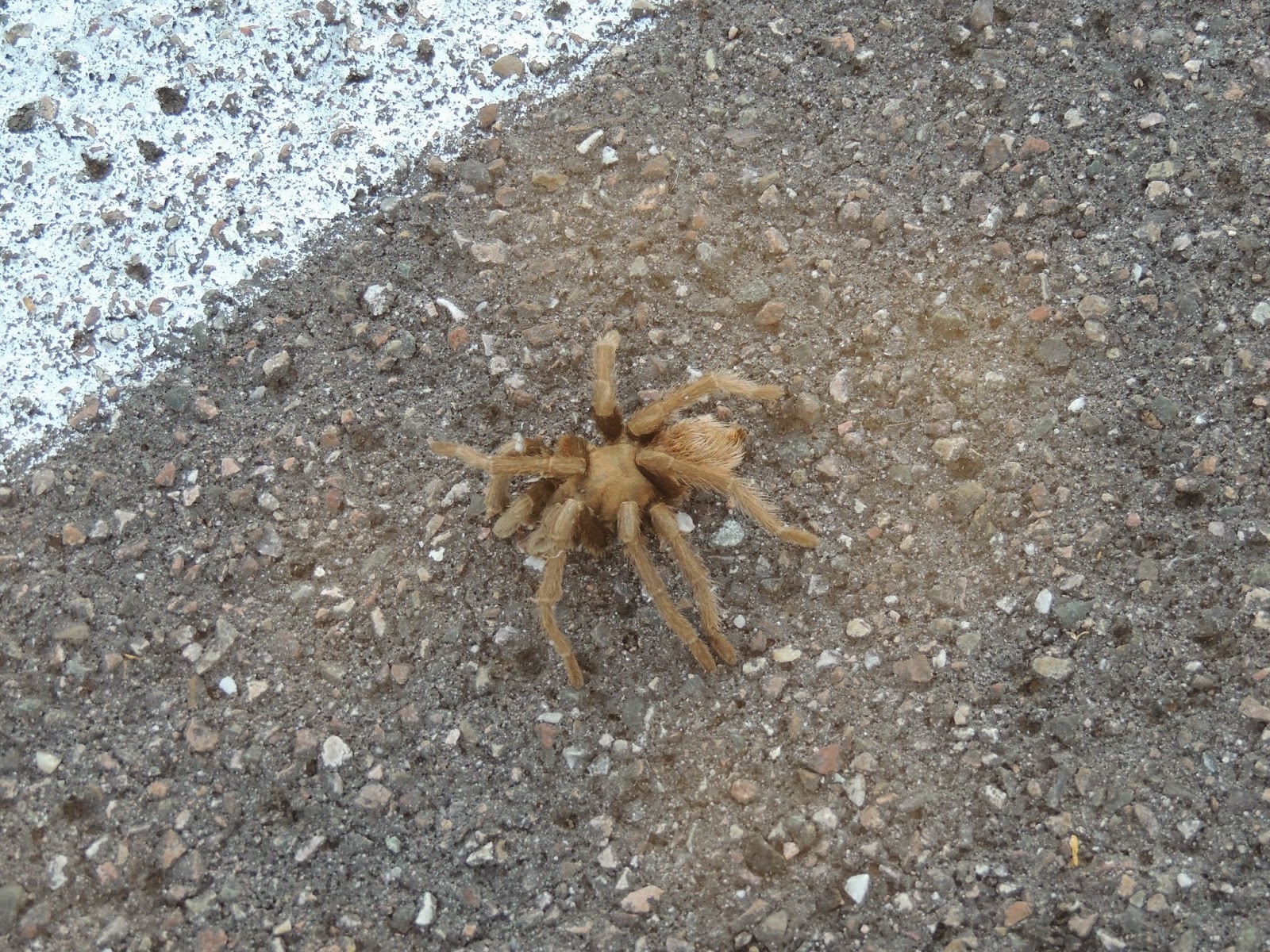 I've now seen two Tarantulas in the wild this winter. At this time of year the males are looking for females. They are smaller this year because of the water shortage. I've read where people have them as pets but I decided I'd just be a spectator. I was so excited because I'd never seen one in the wild before.

Posted by THE RAMBLING NEWS at 1:24 PM