We enjoyed several beautiful warm, sunny days at St. Joseph State Park and then the overcast and rain began yesterday. During late afternoon when the rain let up we went out to get some fresh air and exercise. Two great horned owls were talking to each other and we decided to try and locate them. It took about 30 minutes. They are so well camouflaged they blend right in with the pine bark. We finally spotted them when the male flew to the female to mate with her. It was amazing. Our patience and persistence paid off. 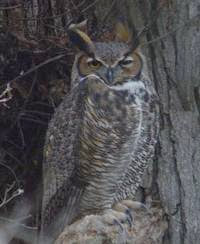 This picture wasn’t taken by Dick even though he now has a new hobby as a “wildlife photographer.” When he was convincing me he needed a new camera he said I was going to really like it because he’d be gone taking pictures and it would give me the time alone I needed. Worked for me.

We’ve enjoyed fun visits with Shiona and Randy, the campground hosts. They’re the ones with the “VIP LOUNGE.” We always meet good people when we travel. We’ve kept in touch with so many, hoping to meet again somewhere along the way. We also enjoyed good conversation with a woman (picture below) from Vancouver Island, British Columbia who bought a small travel trailer and truck and left home in June. She, with her dog as her traveling companion, has ventured all across Canada and down through the eastern U.S. to Florida and then will head west and north to be home by late March. She had never done this before but just decided to go for it. 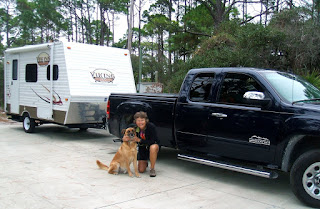 Remember the snake I mentioned in the last blog that killed someone’s dog? While our Canadian friend was walking her dog one day, ahead of her in the road was a huge black snake that stopped and lifted its head to check her out and quickly slithered away. We think it was the same snake who killed the dog because it came from the site where it happened. I'm always looking ahead wherever we walk. I don't want any surprises.
We're leaving in the morning, not because of the snakes, but to check out St. George Island State Park 40 miles east of here. On to new adventures!
Posted by THE RAMBLING NEWS at 6:26 PM