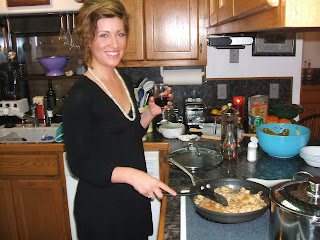 Our visit with our daughter, Maggie, was great. For those of you who do not know, in May she sent emails, inquiring about work, to several B & B’s in the San Juan area of Washington. Out of those that responded there was one in Anacortes called The Ship House B & B that she decided was perfect for her. http://www.shiphouseinn.com/tour/index.htm She was so excited but I was a little worried. You know how mothers can be. Being the adventurous and brave spirit she is, she flew out on June 17. Now it looks as if she’ll stay indefinitely. We understand why. The man she works for, Oggie, is special. The two of them make a good team running the B & B. He and his wife, Bette, are very kind and take good care of her. She is part of the family now. There was never a dull moment the six days we visited. Maggie stayed busy cooking and cleaning but when there were no guests there was plenty of time for sight-seeing with her parents. She loves the town and has made so many friends. We ate at a couple of her favorite places but also had some great seafood meals at the B & B. The Ship House B & B sits high on a cliff overlooking the ocean and the San Juan Islands. WOW - what an amazing view and sunsets. Maggie and I had mother and daughter time too. We went berry picking and enjoyed berries everyday. They seem to be bigger and more abundant out west. Visiting over coffee is one of our favorite things to do and she took me to a coffee shop she loves “The Supreme Bean.” We had hoped to take a ferry to Orcas Island but only fit in one ferry trip to Guemes Island where we went beach combing for agates. It was difficult saying good-bye but knowing how happy she is and seeing she is in a good place made it easier. The next morning we headed south to Oregon to meet up with my sister and brother-in-law in Crater Lake National Park. 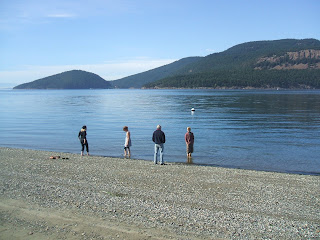 What a great time we had in Anacortes. I was just getting into “Island Time” when we had to leave. I guess when you live on an island you begin to move like a sloth. I think it might be the ferry schedule, you have to get used to waiting. It’s a tough life. I slept in a hammock overlooking the best sunset in all of North America. I told Oggie I was his backup. Every time I climbed out of the hammock I said, “Hey Oggie, I’m back up!” One of Oggie’s favorite lines when he wants to rest is, “I’m going to measure my bed.” 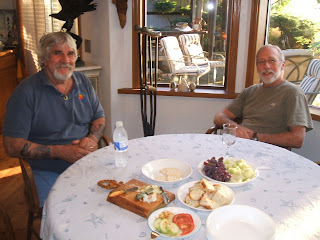 They fed us like Kings and made us feel like family. Oggie is a real captain. He goes “garage sailing” every Friday. You should see the treasure he comes home with. The Ship House is all decked out in a nautical theme and I spent several days constantly discovering new things. Bette is a real sweetheart and Maggie loves helping her. We had six days of laughter. Maggie was always doing her Julia Child’s impersonation in the kitchen, especially the wine drinking part. A trip to the Ship House wouldn’t be complete without meeting “Popeye” and we did--Steve actually, a good friend of Oggie and Bette who visits often and brings all kinds of goodies and helps wherever he can. He has been helping Oggie build on to the B&B for a long time. I wanted to warn him before I left that Oggie bought 1400 bricks at a garage sale last week. Enough to build a new “Brick Ship House.”

We also met many of Maggie’s new friend’s, Elena, Casey and Billy.

Just before we arrived Maggie’s good friend Kelly moved out to Anacortes from Michigan and is rooming with Maggie and working in town at an Italian restaurant. Maggie is glad to have her aboard. It would take a lot more than six days to truly explore this area, but we did fit a lot in. 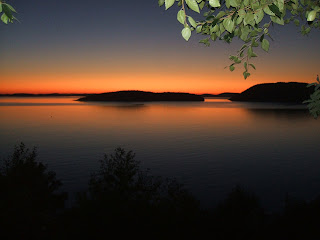 Posted by packtoter at 8:27 PM