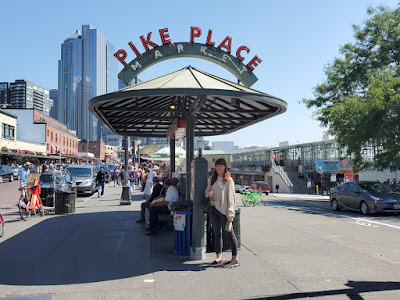 I am loving this part of the country. It's beautiful here and the weather couldn’t be better. I’ve had lots of mother/daughter time with Maggie. It’s not easy because it’s a ferry ride between us. The ferry system here is dealing with population explosion and sometimes there is a wait of an hour or more to even get on, unless I don’t drive the car and walk on instead, but it's worth the hassle to be together. Also, lots of friends old and new that I've enjoyed being with.

Here are Dick’s updates. The photos are not necessarily in correct order and I'm not sure what mountain etc.,but they are all beautiful.


August 10: After Big Lake Youth Camp, I have been doing 30+ mile days. Lots of burn sections with little shade. Again, I’m thankful for my umbrella. I had to cross Russell Creek which is glacial melt from Mt. Jefferson. Hiker Dan, from Newport Beach, OR, helped me out by directing me over the area he’d crossed. It was roaring so LOUD that he didn’t see me trip after I was across and almost roll back into the torrent. 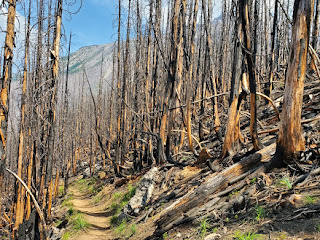 I camped on a ridge overlooking Mt. Jefferson and Mt. Hood. The next morning, hiking in the dark using my headlamp, I lost the trail since it was covered with snow. I’ve been hiking in the dark most mornings, since I get started before dawn, but this was the first time I’d encountered a snow field. I'm thinking this may be the start of hiking in snow now and then.

Side note: (Before going to bed Dick mixes in his empty water bottle, a concoction of Carnation Instant Breakfast (strawberry) with a pkt of Via Pike Place coffee and one cup of milk made with powdered Nido. In the a.m., he drinks it down before hitting the trail and it gives him that quick energy boost to last him til it's light and warm enough to stop and make breakfast). 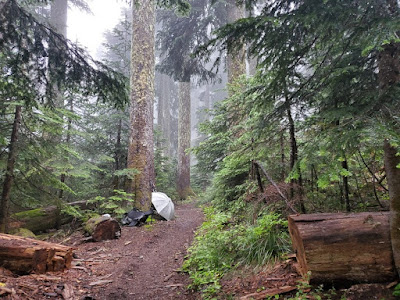 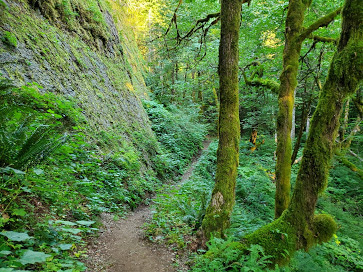 Most of the Mt. Hood area was beautiful with old growth trees. Lots of rain and fog. Fire danger was extremely low but the Bigfoot danger extremely high.
I thought I had lost all my bubble people. They decided to do the “24 Hour Challenge” (60 miles in 24 hrs). They all caught up with me at the Timberline Lodge and we enjoyed the all you can eat breakfast. This stop was a highlight of my trip but, of course, I ate TOO much and had to lay low for 3+ hours and let it digest.


August 11 - Bummer, sorry I missed Connie's friends!  Too bad they were off trail eating lunch and hadn’t seen me sooner. They were right! That was me for sure - the only old man out here carrying an umbrella. Bad timing. We could have had a fun visit. 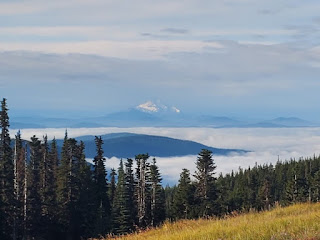 I had a little excitement one night in the Mt. Hood area. Coming down a steep ridge I met a couple from Croatia. It was getting dark and I told them there were no camping spots flat enough for a tent for several miles. I mentioned they may want to go back to the trailhead parking area where there would be some flatter ground to set up a tent. They said there was a man there talking to himself and they were afraid of him. I convinced them to go back with me (safety in numbers) and hopefully he would leave. Otherwise we would sleep away from him and I would deal with him if we had to. At 11 p.m. the guy started screaming profanity at the top of his lungs. Every time it rained a little harder he got louder screaming for the rain gods to shut it off. The couple were understandably freaked out. At one point he came a bit too close so I got dressed, put on my headlamp and went out to find a tennis ball size rock and a stick the size of a club. He kept his distance, but I didn’t sleep the rest of the night. After what happened on the AT this year, I was taking no chances. 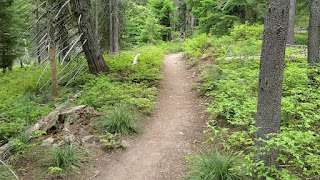 August 12 - That all you can eat breakfast at the Timberline Lodge powered me up the mountain and all the way to the Oregon/Washington border to Cascade Locks. I left before my bubble friends and haven’t seen them since. There were no rooms available at the lodge so I think after the breakfast they all crawled under a rock and went to sleep. It will be interesting to see when I’ll see them next. Doing that  "Challenge" is a good way to ruin your feet. 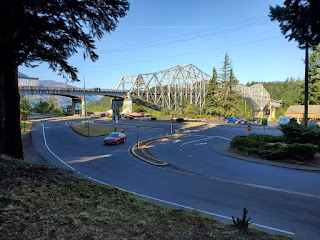 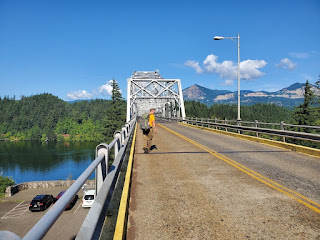 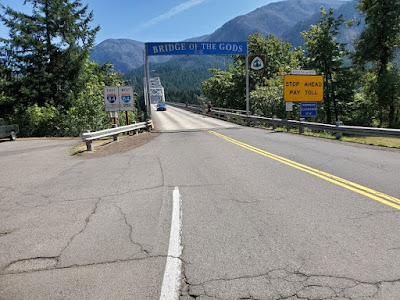 Two miles to Cascade Locks and BREAKFAST. Then crossing the Bridge of the Gods and getting a room in Washington. Rooms cost less on the other side of the Columbia River.
It took me 17 days (approx. 450 miles) to hike through Oregon!

The motel I’m staying at will drive me the 5 miles from the bridge to save me the extra walk. It will be great to have a room. I need to regroup big time. My boots are in desperate need of repair so hoping to get some Shoe Goo and hope they get me to Canada. The patch kit sent by Hilleberg for my tent just may do the job.


August 13 - Did my laundry, but my socks were still full of dirt! I’ve had to soak them in the tub overnight and rinse them about 100 times and still getting dirt out. I guess they aren’t called DARN TOUGH socks just because they never wear out - but because they are darn tough to get clean! I got my money’s worth in hot water at this hotel.

After a day of eating like a little pig, cleaning my gear, clothes and body, I think I’m ready to take on Washington State! But first I need one more super breakfast this morning before I start climbing.

Days later.....(connection very limited. So glad I have the InReach so you know I’m still moving.) 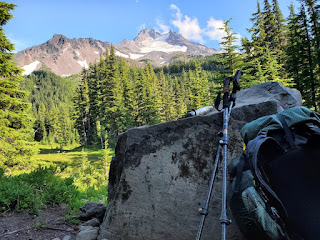 Wow, Washington has been amazing. Old growth forests, massive mountains, glacial melt rivers. Goat Rocks Wilderness is beautiful. Lots of fog though and I’ve had some cold wet mornings. My bubble of people caught up to me but now they have split up. Some hitched a ride back to Cascade Locks for PCT days http://www.pctdays.com. The others from out of the country have VISA deadlines to meet and must hike faster to finish in time. A good group of hikers. I will miss their company.


August 18 - Texting from on top of the world! 14 miles to the Kracker Store at White Pass. I have been warned about two bears that have been harassing hikers there, so I will be sleeping with my food. If they want it they will have to fight me for it. 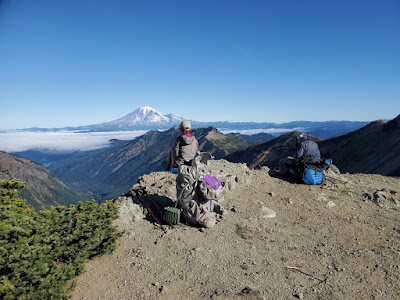 Later....Made it to White Pass. Paid $5 for a shower, $5 to get my resupply box and bought a pizza. They only sold XL pizzas but (believe it or not) I could only eat half. I was going to hang the other half so the bears didn’t get it and eat it for breakfast but gave it to one of my hiker friends instead. He was so appreciative because he didn’t arrive until after everything closed. 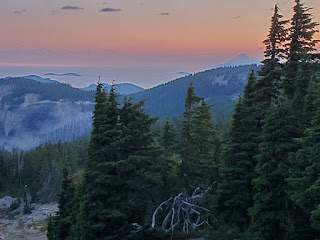 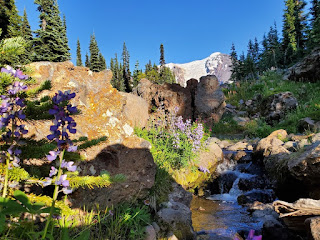 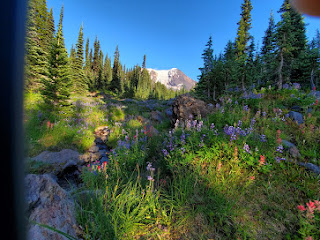 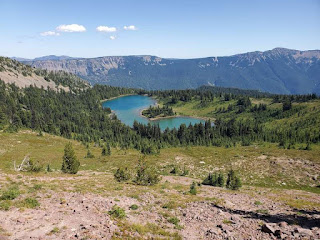 Amazing trip so far but this is my last LONG TRAIL. I'm not giving up backpacking, but I would rather do shorter ones and not be away so long. I miss my wife, I miss my life. I know I've said this before, but I'm ready now. I did the CDT the year I turned 50 and now the PCT the year I'm turning 70. I think that's enough.

Posted by THE RAMBLING NEWS at 5:52 PM