After several friends and relatives asked me to continue blogging I've decided to try again. Thank you for your encouragement. My computer was giving me fits but hopefully it's going to work better now that my live-in "Handy Man" fixed it and got me going again with all his help. You're in for a long one because a lot has happened in a month.


It was great to be home. Since we're only home two or three months we don't even move out of the motorhome. We say it's the best campground we've ever stayed in. This year it was especially quiet because our road was blocked off to through traffic because of road work and construction.

Our little rural road will never be the same. There is a 160-acre Town Center being developed on our corner. The new Meijer anchor store is only the beginning. It won't stand alone long. We will see a big change when we return in the spring. The good thing is we can walk to the store. We may like that as we get older. Dick says I could always be a greeter. 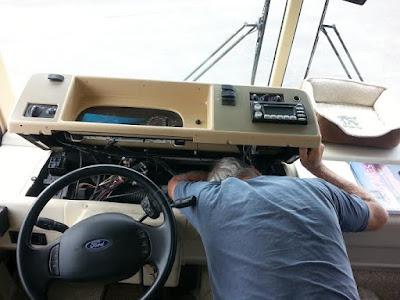 BOO got a little freaked out and we finally found him in the dashboard.


We took Hwy 2 across the Upper Peninsula of Michigan planning to be in Glacier National Park in five days. When we arrived in North Dakota we checked on the fire situation in the park and heard there were several still burning with low visibility because of all the smoke. So we decided to wait it out at Theodore Roosevelt National Park, hoping they would be contained soon.


After a week exploring both the north and south units of the park, the fires were still burning in Glacier, so we made the decision to change our destination to Yellowstone National Park. We took Hwy 12 into Montana, a beautiful route that goes all the way to the west coast. Then we hear there is just as much smoke in Yellowstone. So we figured if we have to deal with smoke we might as well head for Glacier. But first we took a detour to visit a place we've never been -- the Little Bighorn Battlefield National Monument. It was a deeply humbling experience. 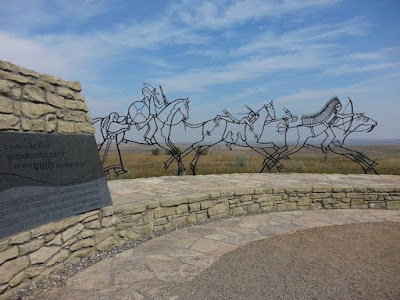 We traveled north to Many Glacier Campground finally arriving Sept 1st and just in time for eight days of cold, cloudy or rain, but that didn't stop Dick from backpacking to a couple of his favorite places. He'd come back looking like a drowned rat but with a smile on his face. We would rather have the rain than fires and smoke. Fortunately, the three weeks we were in the park we had some sunshine too. What was extra special while staying at Many Glacier was our friends from home were campground hosts. We enjoyed our time with them.

We also stayed in two other campgrounds in other areas of the park where we enjoyed some beautiful fall weather.

We met some Continental Divide hikers when we were in East Glacier. Dick talked with them awhile and then one of them asked for a ride when she heard we were heading to Marias Pass. We ended up visiting with her for nearly an hour. She has also hiked the AT, the PCT and this was her second time hiking the CDT, her favorite. Her next hike is across New Zeeland. A great morning. Dick enjoys giving back - he owes a lot of people for all the "trail magic" he has when he hikes.


Of course, when we visit Glacier NP we HAVE to go to the Polebridge Mercantile for a "bear claw" pastry. It's about a 30 mile drive from our campground on the west side. We were very disappointed when we saw how small they were this year. Nearly half as big as other years. New ownership has to ruin things. Oh well, it ended up being another great morning when we met Walt from Minneapolis. Dick found his match. I rarely got a word in edgewise as these two characters and lovers of Glacier NP bounced stories off each other.

While camping it's always fun to see all the different RVs people have. Here are a few I just had to share. 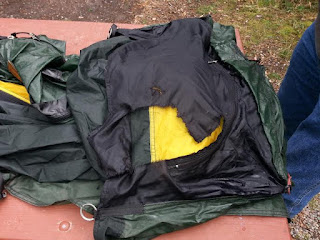 We are enjoying our trip and have had no problems except for the night Dick camped at Granite Park and a "pack"rat ate a large hole in his expensive tent. It must have been trying to get in out of the cold and rain.

Posted by THE RAMBLING NEWS at 6:59 PM