“Keep close to Nature's heart... and break clear away, once in awhile, and climb a mountain or spend a week in the woods. Wash your spirit clean.” - John Muir 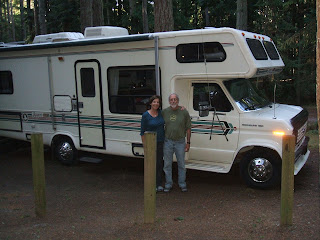 We are heading for Glacier National Park. It is Dick’s favorite place in the U.S. to backpack. I must admit it is one of the most beautiful places on earth. We were there last year and didn’t expect to go back this soon, but friends we met and traveled with in the late 70’s, are here from Australia visiting their families and touring the west. We haven’t seen them in the nearly 30 years since they moved to Australia for a job.
When they contacted us to see if we could arrange to connect before they flew back home, we quickly made plans to rendezvous in the Rocky Mountains. It’s only 1800 miles one way! Why not! We love this route crossing the magnificent straits of Mackinaw and then taking Hwy 2 through Wisconsin, Minnesota, North Dakota and Montana all the way to Glacier. Traveling along Lake Michigan in the U.P. there was very little traffic or people. I think everyone was in Traverse City at the beach. This would be the place to vacation. Almost white beaches all to yourself and beautiful. There are times traveling this route when I feel like we’re in a time warp and returned to the 50’s. Wide open spaces, little traffic, small towns, trains, farmland, grain mills etc... Most of Hwy 2 is still two lane. Many of the little towns have free or almost free camping. We pulled into Chester, MT. to stay at the city park and were invited to join a farewell picnic for a choir teacher who took a job in Billings. I think the whole town was there to wish her well. It was touching listening to the choir sing the "Irish Blessing." It reminded me of the years Maggie was in her High School choir. They sang that song many times. We talked with some fellow campers who were from British Columbia and traveled by motorcycle to Eastern Canada and then down into the US and were now heading back home. When we mentioned we were from Michigan they couldn’t say enough about how beautiful Michigan is compared to all the other places they’d been. Clean, well-marked roads, great campgrounds and Welcome Centers and how they loved the U.P. We agreed.
Minnesota is the land of 10,000 lakes, but North Dakota is the land of 10,000,000 prairie potholes. These potholes provide the most productive wetland habitat for waterfowl in North America. The water levels were abnormally high because of extensive flooding this year from storms during mid-July - especially around Minot. As we traveled through this area I thought about a book I read titled The Children’s Blizzard. I thought of the people who tried to settle and farm this area and the difficulties they had during the harsh winter blizzard of 1888 and how their descendants are still living here today and still fighting the elements.  http://www.bookbrowse.com/reviews/index.cfm/book_number/1506/the-children's-blizzard
Dick’s grandpa Mallery told Dick about a cousin who in his 20‘s homesteaded in the Dakotas in the early 1900s. They built a sod hut and started farming. Grandpa told Dick that he and grandma visited them when they traveled west once. We wish now we would have asked more questions when his grandfather was still alive. Like where in the Dakotas?
Because of the new technique of fracking for natural gas in the Bakken shale formation, many of the little towns of North Dakota have been taken over by oil field workers. There are RV camps behind every bush and gas station. There are infrastructures going up everywhere. The fracking oil business is booming. Fracking has caused much concern around the country because of so many chemicals being forced into the aquifer. Once the workers get all the infrastructures built then they move on. It reminds me of the “tent cities” in the gold rush days. http://money.cnn.com/2011/03/04/news/economy/oil_shale_bakken/index.htm I guess this is what we call progress.
It feels great being back in Montana. I just love the open spaces and big sky. http://www.bigskycountry.net/ I’m on the lookout for those mountains. Should see them sometime soon. The Empire Builder will be passing by on it’s way to Chicago anytime. Gotta go.
Westward Ho!!
CLICK HERE FOR DICK'S BLOG

I like reading the Historical Markers along the road except there’s no way we’ll stop at each one. I read the title as we drive by and look it up on the computer. (Yes, I’ve had a good Wifi connection all the way except through one Indian Reservation) One especially sad but interesting marker was by the town of Chinook. The Bear Paw Battlefield. This is where the Nez Perce surrendered after their long fight to stay on their own ancestral land. When Dick hiked the Continental Divide Trail in 1999, we camped near Wisdom, MT. and it was a very emotional experience visiting the Big Hole Battlefield. http://www.nps.gov/biho/index.htmhttp://www.nps.gov/biho/index.htm
Posted by packtoter at 6:31 PM